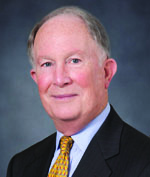 (NSU Newsroom)
NSU Board of Visitors Rector Thomas N. Chewning is stepping aside and returning to his board position as an at-large member.
Current Vice Rector Dr. Byron L. Cherry Sr. will serve as acting rector until officer elections are held during the March board meeting. The change is effective immediately.

“Norfolk State University is an important and historic center of higher education,” Chewning said. “It has been an honor to serve as rector and lead this outstanding board. I look forward to continuing to be a member of the board, and support the University’s new strategies and initiatives.”
Chewning served as rector for three-and-half years and has been a member of the board since 2011. He extended his service as rector beyond an initial, and customary, two-year term to provide continuity of leadership while the University worked to remove the SACSCOC probation.

Chewning oversaw the board’s support for the administration’s successful effort to have probation removed, which was accomplished in December. He also led the board’s work in 2013 to recruit and hire Eddie N. Moore Jr. as interim president. Moore was named president earlier this month.

“Now that the sanction has been removed,” Chewning said, “and Eddie Moore has been elected president, it is time for someone younger with new energy to lead the board. I have complete confidence that the leadership in place will move the University forward.”

“Tom is an extraordinary person whose leadership skills are only surpassed by his generosity and interest in helping others,” Moore said. His judgement, managerial experience, and commitment to our mission are invaluable assets for the Norfolk State community.”

Chewning retired in 2009 as chief financial officer of Dominion Resources, a Fortune 200 company, after a 22-year career. He continues to serve in a number of leadership roles for community service organizations.
Cherry is CEO of Succeed to Lead, a financial management consulting firm based in Dumfries, Virginia, and a retired U.S. Army colonel. He also is a 1982 NSU graduate who majored in accounting.