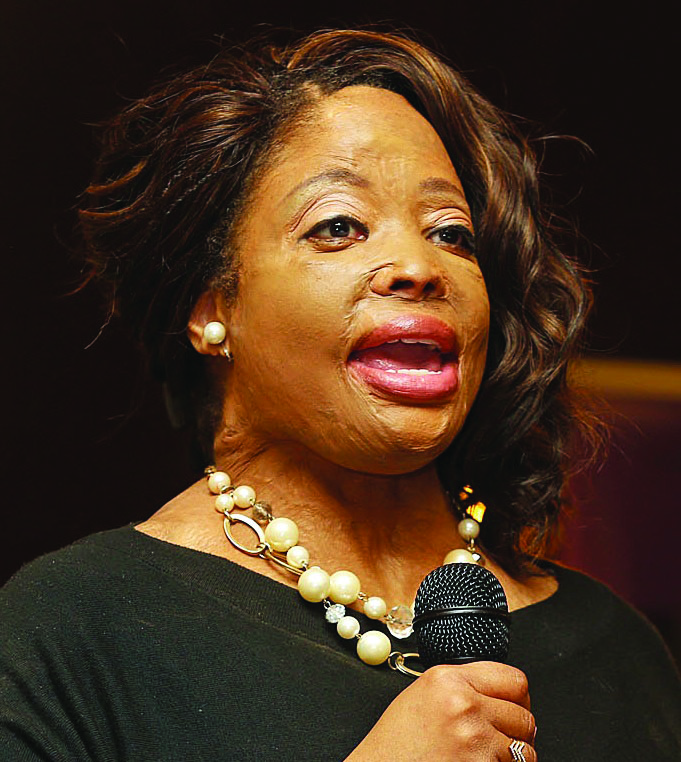 VIRGINIA BEACH
More than 200 guests shook off the effects of the year’s first major winter storm to attend the Gamma Xi Uplift Foundation’s third annual “Stop the Violence Breakfast” at the Holiday Inn Virginia Beach-Norfolk Hotel and Conference Center in Virginia Beach on January 23rd. News anchor, Anita Blanton of WAVY-TV-10 was the emcee.
The keynote speaker was Christy Sims, a public speaker, nationally certified mental health counselor, advocate against domestic violence and a survivor. Sims’ life was forever changed in April 2013, when her ex-boyfriend doused her with sulfuric acid.

She shared the details of that experience, and subsequent outcomes in an emotional narrative followed by a very open question and answer period with an enthralled audience. This group was made up of men and women, old and young, educators, police officers, businesspersons and folks from all walks of life.

Like the attendees, she weathered the storm by catching the last northbound flight to fly into Norfolk. “I told your chairperson – Reggie Matthews – that if God gives me the way to get there, I’m coming. Once I got here, I realized that I was supposed to come.”

Her talk emphasized that the Lord is using her to spread the word about domestic violence, and help others break their silence. The program also featured musical selections by Wanda Upton Jenkins
Promoting the inspired theme of “kNOw More,” this event seeks to increase awareness, educate and empower members of our community to act in ending domestic violence. At the conclusion of the program, the GXUF made donations of $1,000 each to Samaritan House – Va Beach’s shelter for domestic violence victims and the homeless – and the HER shelter in Portsmouth.

The foundation also presented its GXUF Uplift Award to the speaker, Sims for her courage and committment to fight domestic violence through appearances and the Christy Sims Foundation.
The Gamma Xi Uplift Foundation’s overall mission is to provide service, mentorship and leadership that uplifts the greater Hampton Roads, and is a 501(c)(3) entity of Gamma Xi Chapter, Omega Psi Phi Fraternity, Inc.
For more information, visit www.gxuf.org.