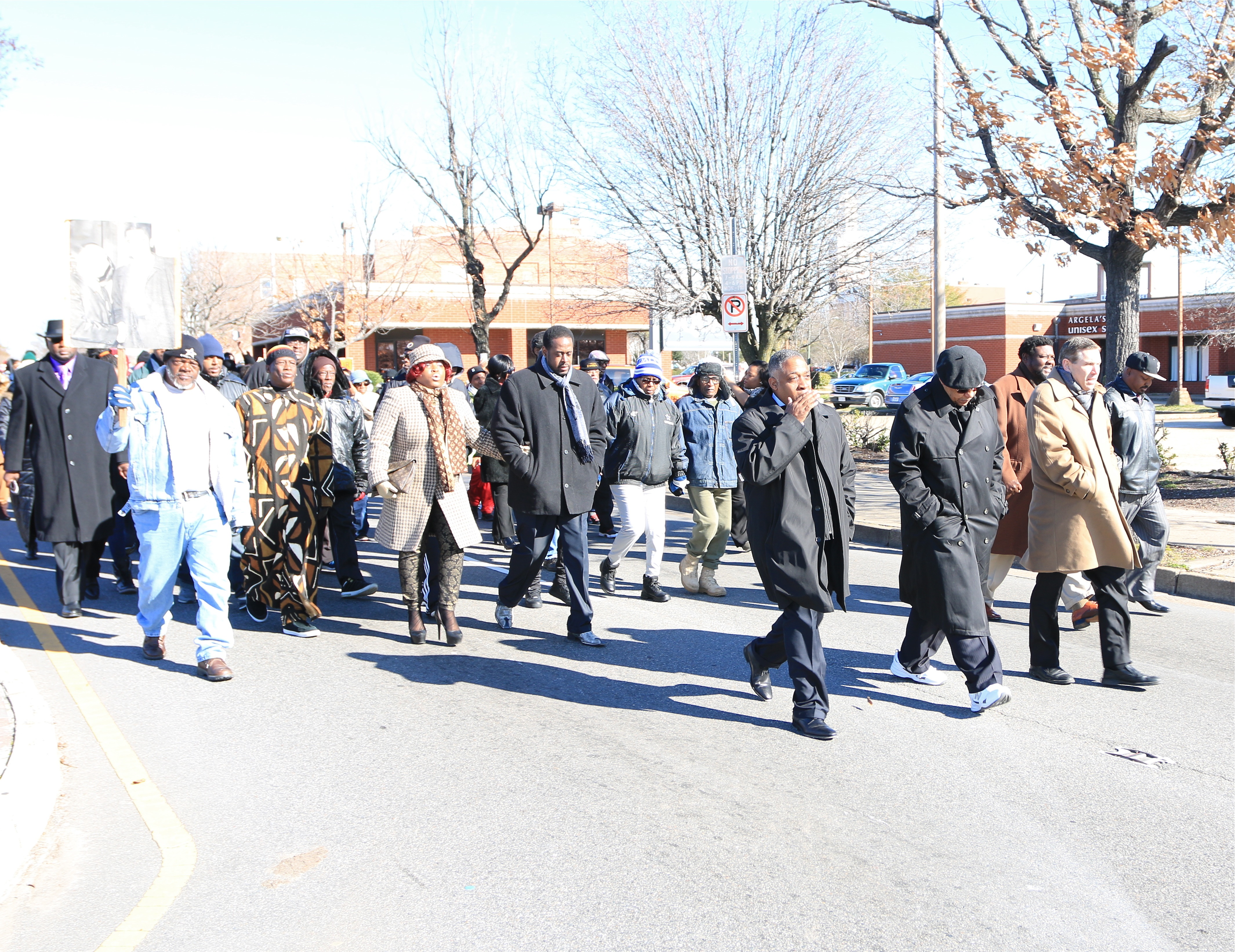 The 30th observance of the birthday and legacy of Dr. Martin Luther King, Jr. was held around the country, and Hampton Roads joined in with words, marches and song.

This year, the city of Norfolk’s main observance had a different format. In previous years, residents, city and civic leaders marched to the MLK monument at Church and Brambleton Streets, where speeches and music were delivered in tribute to King.

But this year, the speeches and music were delivered on the stage of the Historic Attucks Theater, followed by a march of about 300 people to the monument where a wreath was placed at its base.
The event was hosted by Norfolk Councilman Paul Riddick, who directed the attention of the audience to Dr. King’s final “Mountain Top” speech which was replayed throughout the theater as the audience streamed in from the frigid temperatures.

Riddick reminded the audience of the ultimate sacrifice Dr. King paid for his activism.
Riddick said that as Americans pay homage to the slain civil rights leader, the streets, which are named for him in the urban centers, pierce through “communities of dysfunction, poverty and despair.”
Father Jim Curran, of the Basilica of Saint Mary of the Immaculate Conception, delivered the prayer calling for an “end to all division” today in American society.

Norfolk Police Chief Michael Goldsmith, along with Councilman Riddick and School Board Chairman Rodney Jordan were among city officials present at this year’s MLK event.
Goldsmith said he and his staff have been working to reduce the amount of crime and deadly interactions between police officers and citizens by “becoming a part of the community.”

Goldsmith noted his department has been invoking new tactics to de-escalate tense interactions between citizens and the police in the wake of recent shootings of unarmed residents by officers, locally and nationally.
He said recent Norfolk police academy participants have been schooled in crisis intervention and cultural diversity training. Recently, recruits toured the Holocaust Museum in Washington, D.C.
The facility is designed to remind current and future generations of the millions of Jews killed by the German government during WWII.

Ernest Muhammad, a member of the Nation of Islam’s (NOI) Muhammad Study Group #57 in Norfolk, noted during the 60s Civil Rights Movement, NOI leaders such as Elijah Muhammad and Malcolm X disagreed with King’s philosophy of non violence, in face of the Jim Crow segregation and humiliation Blacks faced each day, especially in the South.
“You could not sit where you wanted,” he said to the audience. “You had to go through the back door, not the front door. How would this make you feel, going to substandard schools, or using the colored water fountain, which sat next to the one for whites and if you used it – you risked being ostracized or getting killed.”

Muhammad also said the Black on Black crime rate must end. He called for an end of “self hate” among Blacks and a reduction in homicides in the Black community by MLK Day 2017.
The oration many in the audience were anticipating was the keynote speech, delivered by local activist Michael Muhammad.

Councilman Riddick said that Muhammad was chosen, despite reservations by many in the Black political establishment, because Muhammad’s controversies lend respect and validation to all of the voices in the community.
On the day before, Muhammad had led a “Stop the Violence” march calling for the end of Black on Black violence and police shootings of unarmed residents along the streets of Norfolk.

Known to be fiery and controversial, Muhammad’s delivery was moderate, as he addressed the liberation movement led by Dr. King and the current one, spurred by the police shootings of unarmed Black men, called “Black Lives Matter.”

Speaking without a prepared text, Muhammad said the movement which is led by young African-Americans comes at a time when Blacks are still fighting for socio economic equality and personal respect.
“Forty-eight years after MLK died and 86 years after his birth, we are still pushing forward,” said Muhammad.
He said the youthful energy of the Black Lives Matter Movement must connect with people who led the rights movement two generations ago.

“It is a mistake for youth to ignore the wisdom … counsel of their elders,” he said. “They know who our enemies are. It is also a mistake for the elders to reject the fiery spirit of our youth.”
Muhammad observed that today the nation sets aside a day to observe the legacy of Dr. King; but during the height of the civil rights movement when King’s activism was rejected by many, “most of the churches in this area would not allow him (Dr. King) to speak.”

He said there are Black doctors and lawyers who hang his picture in tribute today, but “but would not give his family shelter,” back in the 60s.
Blacks have not overcome nor “arrived,” said Muhammad, and “we still have work to do … because many Blacks live in a state of degradation equal to the 1960s.”

Muhammad said despite the Black community’s anger over unarmed Black men being shot to death by police, “our fight is not against the police.”
“It would be foolish for us to take up an armed campaign against the police or injustice. We would be slaughtered overnight. If you watch the way our God works, there is no weapon more powerful than our unity.”
Youth members of Teens With A Purpose (TWP) entertained the Attucks audience with song.