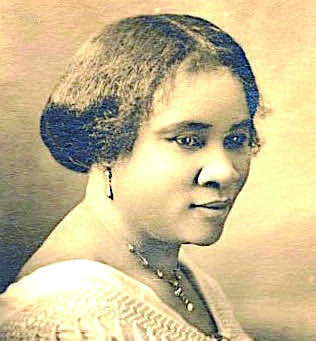 Madame C.J. Walker launched her hair-care line in 1905 with about $2 and a dream.

“A big Black man appeared to me and told me what to mix up for my hair,” Walker said, according to several historical accounts. “Some of the remedy was grown in Africa, but I sent for it, put it on my scalp, and in a few weeks my hair was coming in faster than it had ever fallen out.”

Walker was the first-female-self-made millionaire to appear in the Guinness Book of World Records. And she highlights the 2018 Women’s History Month theme, “Nevertheless, She Persisted: Honoring Women Who Fight All Forms of Discrimination against Women.”

“There is no royal flower-strewn path to success,” said Walker who washed laundry before she launched her own business. “And if there is, I have not found it. For if I have accomplished anything in life it is because I have been willing to work hard.”

Walker experimented with home remedies to create a healthier scalp. She developed Vegetable Shampoo, Wonderful Hair Grower, Vanishing Cream, and other beauty products for women of color. She famously said, “I got a start by giving myself a start.”

She spent the first year and a half promoting her product, according to the website Madame C.J. Walker.com by A’Lelia Bundles. In 1908, she temporarily moved her base to Pittsburgh where she opened Lelia College to train Walker hair “culturists.”

“Don’t sit and wait for the opportunities to come,” Walker once said. “Get up and make them.”

Two years later Walker was living in Indianapolis. There, she built a factory, hair and manicure salon and another training school.

Three years later, in 1913, Walker expanded her business to Central America and the Caribbean. “Her daughter A’Lelia, moved into a fabulous new Harlem townhouse and Walker Salon, designed by Black architect, Vertner Tandy. “There is nothing to equal it,” Walker wrote to her attorney, F.B. Ransom. “Not even on Fifth Avenue.”

In Harlem, Walker quickly became involved in Harlem’s social and political life, taking special interest in the NAACP’s anti-lynching movement to which she contributed $5,000. “My object in life is not simply to make money for myself, I love to use a part of what I make to help others.”

In July 1917, she traveled to the White House with a group of Harlem leaders to advocate federal anti-lynching legislation after a white mob murdered more than three dozen Blacks in East St. Louis, Ill.

Meanwhile, Walker persisted as an entrepreneur. In 1917, she hosted the first national meeting for businesswomen in Philadelphia. The meeting not only rewarded successful agents but encouraged political activism as well, her website noted.

“This is the greatest country under the sun,” she told her sales staff at the 1917 meeting. “But we must not let our love of country, our patriotic loyalty cause us to abate one whit in our protest against wrong and injustice. We should protest until the American sense of justice is so aroused that such affairs as the East St. Louis riot be forever impossible.”

After Walker built her mansion, Villa Lewaro, in New York’s Hudson Valley a century ago, she wrote to her attorney, F.B. Ransom, “Do not fail to mention in the article for Negro History Magazine that the Irvington home, after my death, will be left to some cause that will be beneficial to the race, a sort of monument.”