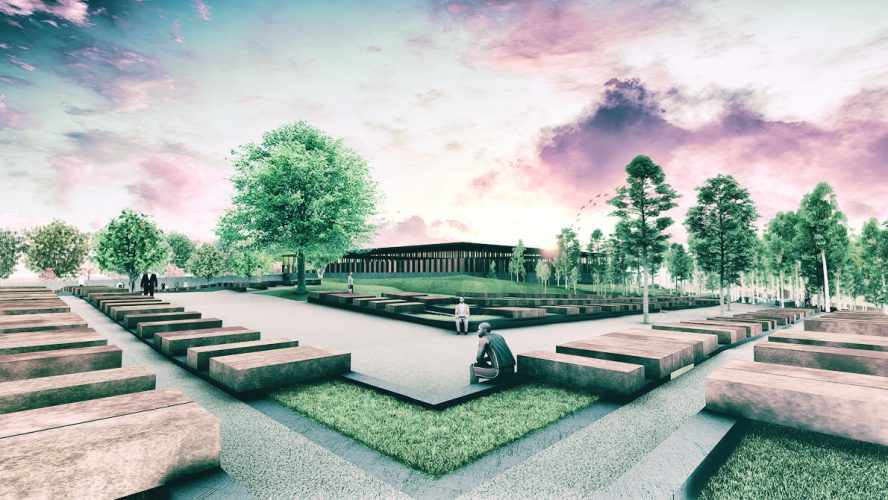 The Equal Justice Initiative (EJI) will open two unique Black history sites here on April 26. One is a memorial; the other, a few blocks away, is a museum. Both highlight historic racial injustice of Blacks in America.

The EJI’s new National Memorial for Peace and Justice is America’s first national memorial dedicated to victims of lynching. It will acknowledge an era of racial terror in the United States when thousands of African-Americans were lynched and publicly tortured, sometimes in the presence of thousands of people.

Set on a six-acre site, the memorial uses sculpture, art, and design to contextualize racial terror. The site includes a memorial square with 800 six-foot monuments to symbolize thousands of racial terror lynching victims in the United States and the counties and states where this terrorism took place.

A few blocks away from the memorial, EJI will open The Legacy Museum: From Enslavement to Mass Incarceration, which explores slavery, lynching, segregation, and mass incarceration in America on land where enslaved people were once warehoused. The new museum is located steps away from what was once one of the most prominent slave markets in America, and from a port and rail station that trafficked thousands of enslaved Black people in the mid-19th century.

EJI was founded in 1989 by Bryan Stevenson, its director, a widely acclaimed public interest lawyer and best-selling author of Just Mercy. It is a private, nonprofit organization that works with communities marginalized by poverty and discouraged by unequal treatment. EJI provides legal assistance to innocent death row prisoners, confronts abuse of the incarcerated and the mentally ill, and aids children prosecuted as adults.

Stevenson said the new museum and memorial are part of EJI’s work to advance truth and reconciliation around race in America and to more honestly confront the legacy of slavery, lynching, and segregation.

“Our nation’s history of racial injustice casts a shadow across the American landscape,” he said. “This shadow cannot be lifted until we shine the light of truth on the destructive violence that shaped our nation, traumatized people of color, and compromised our commitment to the rule of law and to equal justice.”

The memorial is designed with hundreds of six-foot, corten steel monuments aligned in a structure that sits above the city of Montgomery. It features new sculptures from African and African-American artists that explore slavery, segregation, and contemporary issues of racial inequality. The spacious park holding the memorial includes a monument for every county in America where a racial terror lynching took place that can be claimed by community groups and installed locally.

The Legacy Museum: From Enslavement to Mass Incarceration, which explores slavery, lynching, segregation, and mass incarceration in America is located on a site where enslaved people were once warehoused. Sculpture, fine art, and technology are combined with original research and multi-media presentations to create a unique cultural experience.

The April 26 opening will be accompanied by several days of educational panels and presentations from leading national figures, performances and concerts from acclaimed recording artists, and a large opening ceremony, featuring Congressman John Lewis. From April 26-29, EJI is expecting thousands of visitors to travel to Montgomery to celebrate the launch of these important new American institutions.

Work on the memorial began in 2010 when EJI staff began investigating thousands of racial terror lynchings in the American South, many of which had never been documented. EJI was interested not only in lynching incidents, but in understanding the terror and trauma this sanctioned violence against the Black community created. Six million Black people fled the South as refugees and exiles as a result of these “racial terror lynchings.”

EJI staff have also embarked on a project to memorialize this history by visiting hundreds of lynching sites, collecting soil, and erecting public markers.

The Memorial for Peace and Justice was conceived with the hope of creating a sober, meaningful site where people can gather and reflect on America’s history of racial inequality, said Stevenson.

More information and tickets for admission to the museum and the memorial are now available at museumandmemorial.eji.org.