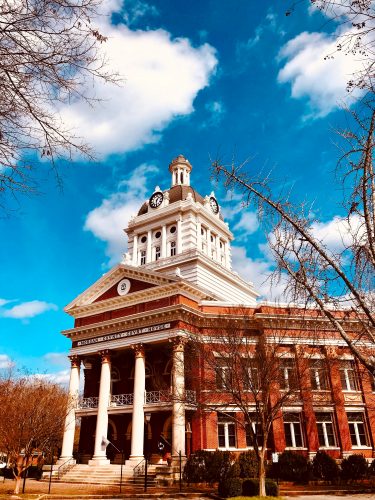 After the Atlanta suburb of Griffin, Ga. declared April as Confederate History Month, a former white elected official walked to the microphone and began to hurl the N-word at a public meeting.

The tense exchange occurred during the public comments portion of a recent meeting that is on the city’s website. Larry Johnson, a former white member of the board in the 1990s, stood at the podium and turned his attention to Rodney McCord, one of three officials of color. According to the video on the city’s website, Johnson stood at the podium publicly recalling the time he said they’d reminisced over race as beginning city officials.

Publicly reminding McCord of the conversation he said they had once had about race, Johnson said speaking at the podium, “I told you at that time that there were white folks, and there were Black folks when I was growing up. There was white trash – my family – and there was N––town. I lived next to N––town.”

The comment immediately caught McCord off guard, while the other board members sat quietly.

“You lived next to what town?” McCord asked Johnson.

“Hold on a second,” McCord interrupted.

In the next few minutes, as shown in a public video of the meeting, an agitated McCord tried to express his frustration, while the board’s chair, Douglas Hollberg, stopped him so Johnson could keep talking.

“Mr. McCord, please let him get to the point so we can move on,” Hollberg said.

McCord added, “Now if y’all want to clap and think that that’s okay for this gentleman to stand, in 2018, and get here at the board of city commission meeting – 2018 – the Civil War is over and he is using the N-word not once, not twice – three times! And he just continues to say it with not one word about who it offends.”

At that point, Hollberg asked Johnson to refrain from using the racial slur.

Johnson then went on to talk about the Confederacy, why he supports the Confederate flag, the Civil War, and his Scottish heritage.

“My skin is white, my neck is red, and I was born in Southern bed,” he said. “Nothing wrong with that. I hope that doesn’t offend anybody.”

He also apologized to McCord, and before leaving the podium, reiterated an earlier argument that the Civil War wasn’t fought over slavery.

Referring to the use of the offensive slur, the next speaker who addressed the board said the lack of respect she had just witnessed did not represent the city she made her home just a year ago.

“So I propose that we have a list of words that can and cannot be used here at the commission meeting,” Bonnie Moret told the board. “Because if I stood up here and used a four-letter word that began with an “f” and ended with a “k,” everybody would be offended. So I think there should be a decorum from everyone … just respect other people. Thank you.”

In 1861, Georgia seceded from the Union and joined the Confederacy, which the declaration described as a fight for “states’ rights, individual freedom, and local government control.” Georgia became the last Confederate state to be readmitted to the Union in 1870, several years after the Civil War ended.

McCord was critical of the proclamation. He said it sends a message that the city is “willing to offend” its Black residents to “make other people feel good.”

“A proclamation to these very anti-Americans who did not want to be a part of America and now were are going to celebrate – that is the most un-American thing that I’ve ever heard,” he said.

Those who supported the proclamation said the objections were based on misinformation and argued that the Confederacy was about heritage, not about racism, slavery, or hate. But many historians reject the notion that the war had nothing to do with slavery.