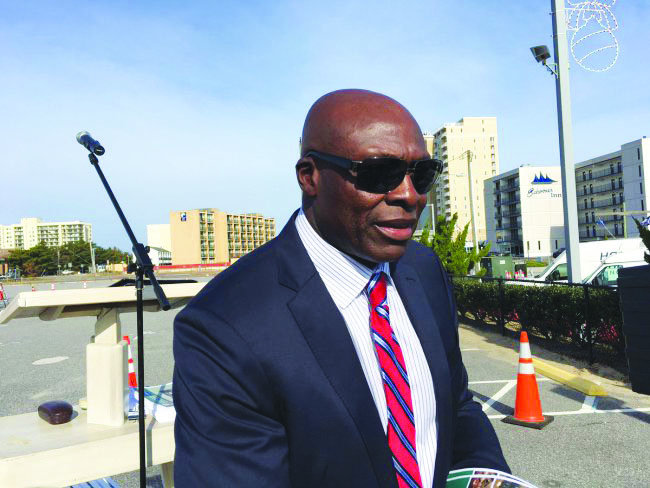 Norfolk native and Booker T. Washington High School product, Bruce Smith had a stellar career in the NFL, highlighted by four trips to the Super Bowl as a Defensive Linemen with the Buffalo Bills. After his career ended in 2003, he turned in his NFL uniform, formed Bruce Smith Enterprises, LLC and instead of chasing elusive QBs, he pursued real estate development opportunities.

Over the years Smith has built an enviable reputation as a partner or direct investor in various projects. But he has not achieved any meaningful development projects on the Virginia Beach Oceanfront which attracts thousands of tourists and generates millions for the city. Smith said it may be because he is an African-American.

Smith expressed his dismay in a letter on November 18 to Virginia Beach Mayor Will Sessoms which caught the Mayor’s attention.

That’s not the case at all, responded Sessoms a day later which led Smith to hold a press conference on November 28 at Rudee Loop, one of the areas he wanted to help develop, but the city turn him down. Smith stood behind a lectern and addressed about 30 supporters and print and broadcast media, taking an aim at the mayor for refusing to commit to doing a disparity study to determine if indeed Virginia Beach policies deter Blacks and other minorities from securing city contracts.

In his November 18 letter to Sessoms, and sent to members of city council, the governor, 24 members of the House of Delegates and 10 Senators, representing portions of the Beach and other parts of the region, Smith spelled out his stand on the matter of his inability to develop property at the Oceanfront.

“I have endeavored for 10 years to do business as a real estate developer in the Virginia Beach Oceanfront,” Smith wrote in the three-page letter.

“With the business relations and contacts I have fostered through my 19-year NFL career, I have been able to partner with Fortune 500 and 100 companies to create world class projects that would undoubtedly be a boon for the city of Virginia Beach.

“Yet despite my efforts and the inherent merits of these projects that would generate thousands of jobs and revenue for the city, I have been met with unwarranted opposition,”

Smith said when he has asked why, “I have received only the most evasive and nonsensical of answers in response … such as ‚we don‘t want a cookie cutter project or a chain restaurant…we are not ready to develop that site or someone else has a better project.”

Smith wrote that he noted even the local media has pointed out that he may be ‘the wrong Bruce,” a reference to Beach Developer Bruce Thompson, who has been awarded some $18 million in city funds to rehabilitate the old Cavalier Hotel.

“At the stage of the process, with all the qualifications I have brought to the table as a developer, it is certainly not unfounded that I would point out the possibility that I am being unfairly marginalized and excused on the basis of race.”

Smith asked if the city was still applying the “implicit mandates of the old Jim Crow South which would require that economic empowerment and enfranchisement be reserved for whites.”
“Is the Virginia Beach establishment safely guarding its gates to ensure that its most hallowed and exclusive club remains forever closed to minorities?”

Smith noted in the letter that city leaders call Virginia Beach the “greatest city in the country.”

But, Smith said, the city will “not achieve that greatness which is within its grasp if it does lead with inclusion and racial diversity.”

Smith requested that the city conduct a disparity study to define the reasons why minority developers have not been allowed to participate fully in the city’s procurement system.

Mayor Sessoms responded to Smith’s letter the following day and denied that race plays a part in why he has failed to secure a meaningful development deal in the city.

Sessoms said that during his seven year tenure as mayor, he has focused on increasing city contracts with minority businesses.

“I welcome with open arms Bruce Smith doing business in the city of Virginia Beach,” he said.

During his press conference at the Rudee Loop, Smith said if the city has been unable to reach its minority contracting goal of 10 percent in the eight years Sessoms has been mayor, “this is a very serious problem.”

Blacks represent about 30 percent of the city’s population.

Smith has reported that he has a stake in the Hyatt Place Hotel at the Oceanfront and previously was a partner in the Cosmopolitan apartments at the city’s Towne Center. Smith honed his developing skills working with the Armada Hoffler Development Corporation. He has three development projects in D.C.

According to his business resume, he was the main developer in a project in Blacksburg where he built a Hilton Garden Inn and the Smith Landing Apartments. Smith has sought some input into the development of the Beach Dome site and the Rudee Loop, which the city is developing with housing and commercial outlets.

For the past several years, according the 200 Plus Men of Hampton Roads, its leaders have urged all of Hampton Roads’ cities to conduct a disparity study to determine the level of minority participation in each city’s procurement system.

But only the school board of Portsmouth and the city of Hampton have undertaken any studies.

Bruce Williams, who chairs the 200 Plus Men’s Economic Justice Committee and is the owner of a P.R. firm at the Beach, has spearheaded the effort to get area locales to do the studies
Williams said the studies would shed light on the lack of traction that minorities, especially Blacks, have been able to make to compete for city contracts.

The mayor said last week that instead of a study, the city should invest in expanding the minority procurement program and build better ties with minority businesses.

In 2008, the Virginia Beach City Council established a business target of 10 percent of Small Minority and Women-owned (SWAM) goods and services; construction; and architectural and engineering services. This past year, it had achieved 6.5 percent of its SWAM contract goals. But Black leaders at the Beach say that if you single out Black businesses, the figure stands at less than 2 percent.

“If you look at what he has done, in other places on other projects, his resources, his connections and career in the NFL, the question is why not?” said Bruce Williams about Smith. “Why can’t he be a viable developer at the Beach? How many chances did they give the guys who proposed to redevelop the Dome area?”

Williams continued, “Other people, it seems, are encouraged to do so and their proposals are vetted. Why not Bruce Smith? If this were in D.C., Atlanta or New York, this would not be a question. People smile at you and shake your hands, but that has not gone anywhere. I think enough is enough.”

“I am not sure what his proposals were for the Dome site or the Rudee Loop projects,” said Miles. “But he has a proven reputation as a developer. He could go to Buffalo where he played in the NFL or D.C. but he wants to invest here at the Beach.” Smith lives in Virginia Beach.

George Minns is the President of the Historic Seatack community’s Civic League and is seeking re-election to the Beach’s NAACP Presidency.

Minns, who is known to challenge the city on various policies and issues affecting the African-American community, said based on his research and personal experience, contrary to Mayor Sessoms’ declaration, he believes Smith’s claim.

“I have had personal experiences with the racist traditions and policies toward Black people in this city of Virginia Beach,” said Minns. “The city of Chesapeake, created the same year the Beach was, Norfolk, Portsmouth and other cities have resolved many of their racial issues, but it seems the Beach has not.

“This city generates thousands of tourists, including Blacks who also spend dollars at the Oceanfront, where the money stays to pay for various projects,” said Minns. “But this has not translated into any economic progress for Blacks down there.

“We are 28 percent of the city’s population, but we represent just 1 percent participation in procurement,” he said. “There are 30 Black police officers, few Black fire fighters, no Black circuit court judges and soon, no African-Americans on city council. This city wants to project a progressive and diverse image to lure tourists here. But it has not lived up to it.”

Gary McCollum recently ran for the state senate and fell short. He was a long time Executive with Cox Communications of Hampton Roads.

“In 2008 the city promised to expand its Small Women and Minority-owned (SWAM) representation for procurement contracts to 10 percent” he said. “The last number I saw was at 1 percent. Something is not right.

“They say Virginia Beach is the greatest city in the world,” said McCollum. “But for some and not all, it seems.”