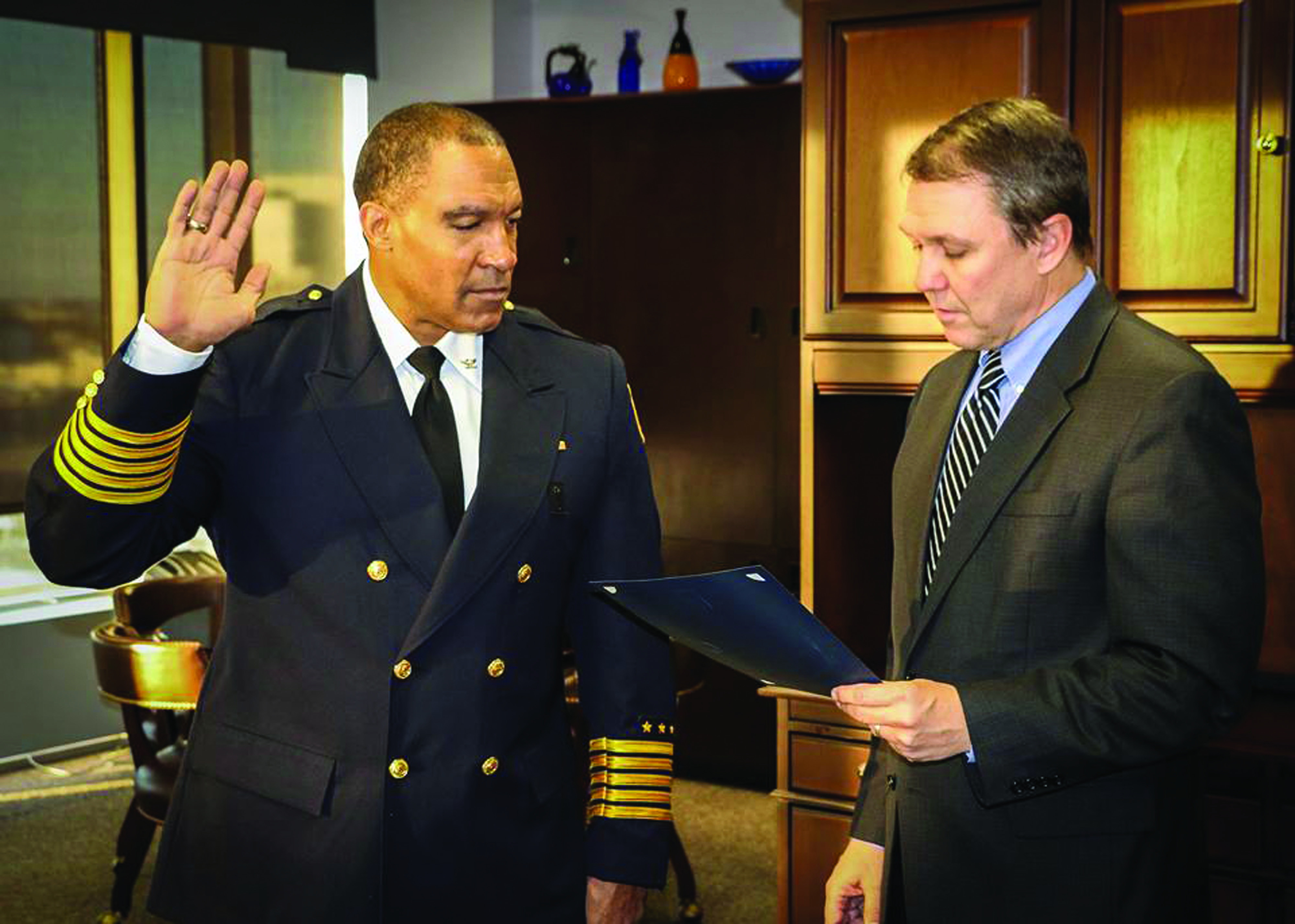 Boone, a native of New Brunswick, New Jersey, replaced Michael Goldsmith, who like Boone, worked in a myriad of assignments as each migrated up the ranks of the NPD.

On December 2, the day after he took command, Boone sat down with the New Journal and Guide to talk about his new role as Norfolk’s top cop. Also, about his responsibility in directing the resources and ensuring quality service from the personnel of one of the largest police units in Virginia.

He is the third African-American named to that post in 22 years, and he now leads a police department in a city where Blacks are almost half of the population.

Currently, there are 126 Black and 43 Hispanic officers sworn to protect and serve the city’s people and property out of department of 706 sworn officers.

Chief Boone cites this disparity as one of the most notable areas for improvement in the department. Several years ago he was tasked to lead a special unit to recruit more minorities to the NPD, a goal which has been frustrating.

“I have been working on recruiting more African-Americans and we need to move the needle,” said Boone.

“Also, we have to show there is opportunity,” he said. Boone said NPD can do that because the department has an African-American chief, captains, sergeants and corporals.
He said increasing the number of minorities in uniform is closely tied to the history of policing across the nation.

Starting with the high profile police shooting of Michael Brown in Ferguson, Missouri in 2014, the issue of African-American men, especially, being gunned down by the police officers has been highlighted in traditional and social media.

Incidents like the one in North Charleston, South Carolina, where a White officer, Michael Slager, was recently freed by a hung jury for shooting a fleeing Black man, Walter Scott, continue to add to the tensions and distrust.

Last year, according to the website Killedbypolice.net, in 2015, 1,210 civilians were killed by the police and thus far this year, 1070 have, for varying reasons, been shot and killed by officers.

Chief Boone cited two policies he believes could help to abate such tragedies and the mistrust citizens harbor toward the police, regardless of race and income.

“We will start with community policing,” he said, then adding, “but we use that phrase so much it has gotten stale…we just check the box.

“I want authentic communicating, policing and communication. People know when you are just pretending … and being gamed. You have to be authentic and build relationships, because it’s not what you say but what you do.”

“(S)o far as community outreach, over 60 officers are in those Title I schools; for a lot of these kids they have had a time to sit with a police officer.”

Chief Boone said he plans to continue to expand the community outreach to civic leagues, schools and churches and to be visible and interactive, as he said Chief Goldsmith and his staff did.

Boone was assigned the department’s Community Outreach Officer two years ago when he was named Assistant Chief. He said he has been a tutor at Jacox Elementary School for the past three years, a task he has enjoyed; but, his new job may deter him from continuing on a regular basis.

Boone said while growing up in New Jersey, he and his friends had a disdain for the police who patrolled the streets of his neighborhood. It is a view he said he and others in the NPD have worked to change among Norfolk’s young African-Americans.

“Where I am from, the police did not care,” said Boone. “They did not care about community outreach. We (NPD) are head and shoulders above that. If you care about a particular neighborhood, you have to go beyond the norm.”

Chief Boone said the NPD’s biggest strength is the high level of training all of its officers receive. He said his department has adopted many of the guidelines laid out by the Obama Administration’s 21st Century Policing Policy Initiative. It is designed to update training, technology and other advanced ways to arrest tensions between police and citizens, especially in communities of color.

“Based on that and the various conferences I have attended and the National Academy, I have talked to other departments and have recognized some of their disadvantages and what they should and should not be doing,” he said.

“Norfolk’s Department is nationally accredited. If you look across the country, a lot of major departments are not.” He mentioned the San Francisco Police Department which is under a dissent decree imposed by the Department of Justice.

In February of 2015 NPD announced a policy to equip its officers with body cameras.

Boone said all of NPD’s patrol officers must wear them and they are required to turn them on once they engage a citizen upon responding to a call or after engaging a citizen based on reasonable suspicions.

“Our complaint ratio has gone down,” he said. “Use of force … gone down. It has been an invaluable tool so far as alleviating complaints that were not true. If they (officers) do not turn them on, they are disciplined. We have disciplined about three officers for not doing so.”

Earlier this year, Boone’s predecessor came under criticism by Norfolk’s political leaders and civil rights activists for failing to release the images captured by police body cameras during the fatal shooting of Willie James, a Black man.

The police body-cam video captured the June 2 shooting in a unit of Tidewater Gardens.

Boone did not take issue with Chief Goldsmith’s decision to eventually allow James’ family and members of the media to view it, which showed James’ wielding a knife, prompting the police shooting.

“Our philosophy gives as much information related to the incident) as you can without compromising the (rights) of the victim, the victim’s family and the investigation, as well as the Commonwealth’s Attorney’s role,” said Boone. “You must make a conscious effort to advise the community that when more information is available it will be released.

“Also, you hope that the relations you have built (with the community) will give you some benefit of the doubt that you are trustworthy and do what you say you will do.”

Recently, NPD decided to allow the Virginia State Police to investigate incidents where civilians are shot by the police. Boone called that decision a viable one.

“It’s one of the President’s 21st Century Policing Initiatives, and it proves the theory that it’s good to have a third party involved in the investigation,” said Boone. “Considering the national optics, people are not always very trusting of the police departments.”

One criticism often hurled at police departments is that officers are more prone to use deadly force when confronting a tense situation involving an African-American.

For Chief Boone, whether there is absolute truth to the claim or not, his answer is based on his experiences patrolling the streets.

“After the encounter, I would ask ‘why were you shaking,’” said Boone. “I came away (with the idea that) there was a true sense of fear.”

From his observations, he called the police shootings of Black civilians this year in Minnesota, Tulsa and Baton Rouge examples of overreacting, based on fear “and to the point where they could no longer think critically.”

“We put the officers through procedural justice training, another 21st century recommendation, where officers treat someone the way you want to be treated,” Boone said. “We want officers to tell people why you are stopped and tell them what they are going to do. This gives the person a chance to explain their position, and it makes people feel they were treated fairly, even if they are arrested.”

Boone said NPD officers are being trained to avoid escalating tensions. There are instances where force must be used, he said, but “many times it’s not necessary.”

As an example, he cited the Baton Rouge fatal shooting of a Black man who was selling CDs and was rushed and tackled by the police. “I did not see anything to require that,” said Boone.
Because of a federal court ruling related to the abuse use of tasers, Boone said has reduced its reliance on them to subdue non-compliant suspects.

Boone said his background and experiences over the past two decades at NPD have allowed him to craft a heightened insight to race and diversity,
“I recall the meeting I had with Chief Goldsmith two years ago in his office and we were looking at a list of candidates for a program,” recalls Boone.

Boone said he noted the lack of diversity in the number of Black males and females and other minorities on the list and expressed his displeasure.

He said that diversity based on race and gender is not only important so far as personnel and advancements; but also, gender preferences, ideas and others aspects of NPD’s operations.

Boone said he fully appreciates how busy former Chief Goldsmith was during his tenure. Now that he is Chief, he will continue to be visible to his officers at morning roll calls and on the streets to observe the quality of their work and how they interact with citizens during the day and into the wee hours of the morning.

Although he said he could not gauge the level of confidence that his troops have for him at the present time, he realizes that the “trust and confidence of the troops” can be lost by not being courage “You need to be courageous, honest and straight forward.”

He continued, “Police are very clever; they know when you are playing politics,” he said. “You have to create an environment to say what you will do and be fair and transparent.”