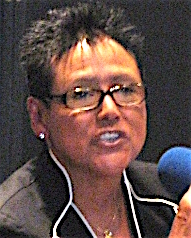 OAKLAND, CA
A former Chairwoman of the Black Panther Party will receive a $2.2 million settlement from the city of Oakland, Calif., to settle a 2015 case in which she was physically attacked by Oakland City Council member Desley Brooks.

The settlement, equivalent to the salaries of about 30 entry-level police officers, consists of $1.2 million in damages for Elaine Brown and a similar fee for her lawyers. Oakland’s city council recently approved the settlement without debate, according to The San Francisco Chronicle.

As a Panther, Brown also ran twice for a position on the City Council of Oakland, California. Since the 1970s she has been active in prison and education reform and juvenile justice.

The settlement comes on the heels of more than two years of legal battles that included the city rejecting the ex-Black Panther leader’s request for $1 million following her confrontation with Brooks, the city council member.

Alex Katz, a spokesperson for City Attorney Barbara Parker, said Oakland’s insurance would not cover the award, so it will come from a city fund. The confrontation between Brown Brooks occurred Oct. 30, 2015, at Everett and Jones Barbeque in Jack London Square.