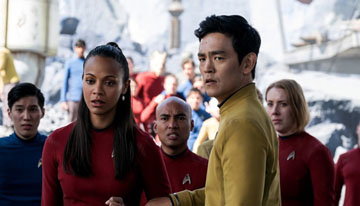 The big debate shouldn’t be if this is the best Star Trek film ever. The more interesting conversation is about whether Star Trek Beyond is a better sci-fi space adventure film than 2015’s Star Wars: The Force Awakens. On most levels, the answer is yes. Visually, the film is eye candy, scene-to-scene. The pleasing colors (Salim Alrazouk, art director), amazingly crystal-clear and perfectly lit cinematography (Stephen F. Windon, Fast & Furious 6) and wondrous sets (Thomas E. Sanders, product designer, Lin MacDonald set decorator) give the footage a fresh new look.

The costumes (Sanja Milkovic Hays) have a hip futuristic style. The music (Michael Giacchino, “Dawn of the Planet of the Apes”) takes explosive scenes to higher levels with choirs and orchestras blaring. Essentially the tech credits are exemplary on every level and overshadow those from the last Star Wars episode. At the hands of scribes Simon Pegg (an actor/writer who also plays Scotty in the film) and Doug Jung, the storyline bursts with danger, humor and strong relationships. It’s easy enough to comprehend without an advanced degree in astrophysics, yet complex enough to hold your attention for 120 minutes.

Much of the far-reaching themes of this long-lasting, space age phenomenon, which started on TV 50 years ago, are still relevant in a multicultural, borderless world that grows more interdependent and intertwined every day. That yearning to achieve great things as a team, for the good of everyone, is a constant. Spock, “Find hope in the impossible.” The new addition of the Jaylah character introduces a younger fighter to the mix. Let it be known, “Star Trek Beyond” bolts out of the gate at warp speed. Read more movie reviews at DwightBrownInk.com.