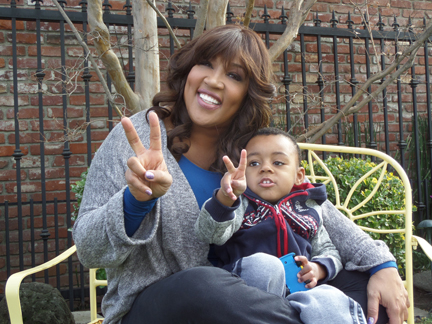 Los Angeles, California
“Hi Veronica this is Kym Whitley.” Yes, the phenomenal Kym Whitley. Adults may know her from her first TV role as the “wisecracking” secretary on “Sparks”, or as the co-host of her BET talk show “Oh Drama!” Our children may know her from Disney’s “That’s So Raven”. Kym has recently reintroduced herself to families as Joshua’s mom, on OWN’s “Raising Whitley” and currently you can see her starring as “Yolanda” on Freeform’s (Formerly ABC/Family) “Young & Hungry”. She has been seen in many different television shows and feature films, including the upcoming movie “Fist Fight”, not to mention her career as a comedian. Kym is currently on a 30 city U.S. tour performing her Stand-up comedy show, “He Said, She Said”, with comedian David Arnold. Ultimately, it is her role as a mother that is most rewarding.

“Raising Whitley” is a docu-series that takes us inside the home of Kym Whitley who was called and told “Your baby is ready to be picked up” by a complete stranger and within a span of 2 hours, Kym Whitley was an instant, new Mom. “I was given Joshua, a newborn son, something that I didn’t know I needed. I was given, looking back on it, something that I can’t imagine my life without now. Joshua gave me a new life.” Ms. Whitely was raised by two wonderful parents, her mom and dad. Kym revealed that she knows what it is like to be raised by a village. Kym remembers Ms. Weaver, who was an important person in her life and childhood and part of her neighborhood village. Kym decided since she was an instant mother that she would reach out to her friends to help her form her own “Village” to help raise Joshua.

What none of us expected was that for some viewers, the show would be a template for many mothers, who have become instant moms, and new first-time moms and dads. Case in point, a compliment was given to a young father who was at a convenience store one afternoon, he was out with his infant child who was in the stroller, that he was pushing proudly. “Hey young man, I am very proud of you for stepping up with your son. We need to see more father’s stepping up and doing what you’re doing.” The young man responded by saying, “Thank Kym Whitley.” Ms. Whitley, she responded, “No way. . . I gotta hear this story one more time.”

On “Raising Whitley” viewers have watched Ms. Whitley’s “It takes a village” mothering. In examining the average African-American village, we find a blended family made up of friends, family and “fictive kin”. It is in these scenarios that we see a significant amount of dysfunction whereby everyone wants to be the “Chief” or the primary decision maker for the family as a whole. This has been a main contributor to intergenerational confusion among the African-American family. When we see Ms. Whitley’s village on screen, there are six villagers at the table wanting to reign as “Chief”.

Ms. Whitley clearly states that what the viewers see on screen is true to life. She contributes keeping her village in order, is a major factor, in being a successful mother with an extended family. Dysfunction is something that she does not tolerate, but she has a unique way of eradicating it on a case by case basis. “If you start everything in love and
based in love and truth and you don’t get ratchet, especially when you’re in the middle. I can join in that bad synergy or I can make a decision to be the neutralizer. If you talk to everyone like they are in a crazy house, you don’t scream and yell. You talk very calm. I guess what I have learned is that when someone is escalated, I respond completely opposite. If I talk calm they seem to talk calm, then they seem to get it. . . The common denominator is Joshua and if you say that it’s about Joshua then it has nothing to do with you or me. If you are trying to raise a King that is not how you do it. [referring to being ratchet]”

It is this method that she practices to help the Villagers see that they are all working towards the common good for Joshua. What’s more important, it keeps her in the “Chief” role of Joshua. Watching the show, one can see decisions are made out of love for Joshua and not for the benefit of one person, which has brought them closer together as a family unit. Having a cohesive “Village” ultimately pays off in that it will develop a well- rounded child, because they are standing in the “gap” carrying out your parenting doctrine.

Being a working-single parent means you are a professional juggler, in that, you are rotating child(ren), job, bills and relationships (if it exists). Ms. Whitley confesses that at times she feels guilty because she is unable to spend more time with Joshua. This is a common response among many working single parents. Ms. Whitley relies heavily upon her village instead of nannies. “It is difficult because I work so much and I see how other mothers feel guilty. We as mothers feel guilty because we think we’re not spending enough time with our children.” I have put in place great people who love doing activities with Joshua, who read to him, who help me teach him, people who have traveled the world and have worldly perspectives. Joshua has met so many people from all walks of life. I feel he’s had a hands-on education, even before he learned to read, so I don’t feel as guilty. I had to realize, if I stayed with my son all the time I would not make any money to take care of him and secondly, he would not get the invaluable education from other people.” By having confidence in her “Villagers” Ms. Whitley is able to rest her heart in knowing that her son is in good hands and receiving good care and learning from different perspectives.

Ms. Whitley says having a solid “Village” provides many benefits to her son Joshua. Such as his being around so many diverse people that he has become more independent. “When he was starting pre-school he didn’t cry, he threw up the peace sign and ran [on into the school]. . . He’s been around so many people that his vocabulary is so big. Sometimes I hear him say a word and I say, ‘What word did he just use? He didn’t get that from me.’ The village is not just for babysitting, it’s for raising and pouring additional knowledge into him. Sometimes, I take my son with me on the set of Young & Hungry. While I’m working, I see the cameramen teach him things, the cast members talk to him, and he’s always around good people. Joshua is always in a loving environment, I make sure of that.

Back in the day, there use to be a public announcement that ran that gave the time and asked, “Do you know where your child is?” Ms. Whitley’s parenting doctrine has an addendum that covers outside play. “I live in a nice neighborhood and I think about when I was a child and how I was free to go outside with my friends and play. But nowadays, nope you can’t be as free with letting your child(ren) go out by themselves and play because you are worried about people snatching your kids. I stand right out on the porch and watch him play. If I am going to cook dinner then someone else has to be outside with him.”

Her addendum also, includes watching out for Joshua’s food allergies. While researching online, I found that Ms. Whitley has a foundation, “Don’t Feed Me” which is dedicated to bringing attention and awareness to food allergies. Kym has created a T-shirt that shows what a child is allergic to. This is perfect for children who are entering school for the first time, going to a new school, going on a field trip or even going to family and friends homes. You can check the box right on the front of the T-shirt which informs anyone, what the child is allergic to. The T-shirt comes in different colors and sizes from infants to adults.

She also has a “Don’t Feed Me” bag that can be used to carry allergy medicines, etc. The bag also includes a refrigerator sticker that “Nanny Joe” of the ABC TV show “Supernanny”, endorses so that Babysitters or “Villagers” will be informed in the absence of parents or caregivers of what the child is allergic to. Visit www.dontfeedme.org for more information.
Ms. Whitley’s show, “Raising Whitley” on the OWN Network has run for four seasons since 2013, sadly there are reports of the show not returning. In the mist of all the unrest, this is one program that is needed to give positive entertainment and show positive parenting and where you can laugh-out-loud. I do not believe that this is the last that we will see of Ms. Whitley, Joshua and the “Village”. One thing is for sure, in a little more than a decade we can expect to see Joshua as a whole man, with family values from different perspectives and not a lost man.

Facebook Question given by Mary D. of Hampton: We’ve always seen her in all these roles where she is the sassy, funny character. Will she continue to play comedic roles or will she play a serious role?
I have filmed some dramatic roles. . . .Drama is exhausting. It is not light, it is heavy. You have to focus more. You have to go deep within the pains in your own life to bring out what is needed for the character. I remember I did a movie with Vanessa Bell Calloway. It was my first dramatic role, it was for a BET movie [A Private Affair], I played her best friend and I had to cry, I was like ‘oh God’ and once I started crying, I couldn’t stop. I remember Vanessa said, ‘Kym this is supposed to be a TV cry, not a real cry.’ I had snot hanging down my face. I remember filming that movie, I was exhausted every day after I left the set.

“I also did a TV show called “Stand Off” where I had to play the hostage negotiator. Once again, I was exhausted. Dramatic roles are a challenge. Drama is good. People love drama, I love watching drama and I love watching comedy. Surprisingly, I won the ISA (Independent Spirit Award) this year, for Best Guest Actress in a Drama for my role as “Big Candi” on the web series, “The Bay”. But if I can effect change with reality, talk shows or just being Kym Whitley, comedy is much easier for me. Because I like to be a light in the world and bring laughter. There is so much darkness and drama already. Does Kym Whitley need to change? Do people really want her to go there? I think that people want to see that, but would they want me to stay there? For updates on Kym Whitley, please follow her on Twitter, Facebook and Instagram @kymwhitley or go to www.iamkymwhitley.com.

Next column Greenleaf Star Lamman Rucker. Do you have a question for him? Send me a friend request on Facebook so that I can get your question.