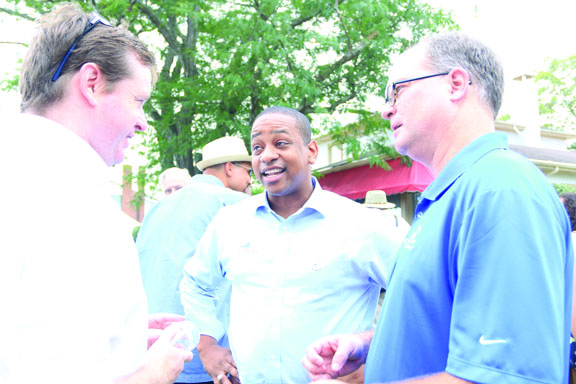 Three years ago, then political novice Justin Fairfax lost the Democratic Party’s primary race for Attorney General (AG) to Mark Herring to determine who would be the party’s nominee.
The Democrats eventually captured the top three political offices in the state. Now Fairfax is running for state-wide office again, this time for Lt. Governor. While the primary race to determine the General Election candidates for 2017 is months away, Fairfax was the first this year to throw his hat into the ring for Lt. Governor.

Joining him thus far, in the race is Democrat Gene Rossie of Fairfax and others may follow suit. Fairfax has been using his early entry to crisscross the state, reminding people of who he is, the issues he is concerned about and building support ahead of the race next year. He says he has a short, but critical list of “lessons learned” about that failed race for AG, which he is applying in his race for Lt. Governor this time.

“I wanted to start early this time and get out among the people,” said Fairfax, 37, and a former federal prosecutor. “I wanted to travel about and keep my network of support going.”
“Secondly, after the 2013 campaign I stayed involved. I chaired the coordinated campaign for Democrats in 2014 and was Mark Warner’s co-campaign chair. So I believe my network support and enthusiasm for my candidacy has grown.”

While Fairfax and Rossi have announced their interest in the AG’s job, the Republican field is growing. Thus far, State Senators Bryce Reeves of Spotsylvania, and Jill Vogel of Fauquier, and Del. Glenn Davis of Virginia Beach have entered the race. Fairfax, who runs a small dental office business in Fairfax County, is the father of two. Fairfax said he has traveled more than 5,000 miles over every region of the state to cultivate support for his campaign.

During recent weekends, Fairfax has been seen at various high profile events in Hampton Roads, including African Arrival Day in Hampton, the Africana Festival in Virginia Beach, the Virginia Legislative Black Caucus reception in Norfolk, and last weekend, he was among the hundreds attending Congressman Bobby Scott’s 40th Annual Labor Day Picnic in Newport News.
He thinks his early investment in the race will help him build on the level of support he received three years ago.

Fairfax pulled in 48 percent of the overall vote against Herring three years ago. He said he was close in the locales he lost, receiving more votes than his rival in eight of the state’s 12 most populous cities. He swept most of the major cities in Hampton Roads, he said. Fairfax said he feels optimistic about winning large swatches of votes in the Democratic-voter rich Urban Crescent which includes Eastern Northern Virginia, the Richmond area and Hampton Roads.

Most politicians who seek the office of Lt. Governor use it as a springboard to Governor or higher positions. Lt. Governors are mostly visible when the General Assembly is in session because he or she presides over the Senate. Recently with the Republicans having a 21 to 19 seat majority, Democratic Lt.. Governor Ralph Northam was able to break a tie vote when a Republican voted with the opposition. Such action gives Democrats an opportunity to control the Senate agenda.

Fairfax says he wants to promote issues which benefit all Virginians and will support his party’s policy priorities to meet that goal. He said that with the growing economic anxiety among working and middle class Virginians, promoting education and job growth is important. He said millennials are fearful that they will not do as well as their parents. And with the growing job employment insecurity, they are delaying having families, buying a home or starting a small business and other economic benefits which “allow them to realize the American Dream.”

Fairfax said he is concerned about the growing debt college students are accruing after school which is delaying their economic and personal choices as well. “My wife and I started a small business (dental office) and it was risky,” said Fairfax. “But we were not burdened with the college debt. We are hoping other Virginians can do this as well.” Fairfax said he supports reforming the state’s criminal justice system “because we are spending a massive amount of resources incarcerating teens and we have to find a smarter way. I prosecuted a lot of cases and we cannot incarcerate ourselves out of this situation.”

Fairfax said he is concerned that Virginia is at the top of the list of states where Black students are being referred to police for bad behavior in pubic schools. “Why are kids getting misdemeanors in junior high school,” asked Fairfax. “We must devise a better way of dealing with this issue.” Recently some Norfolk City Council members mentioned they would consider some avenue toward decriminalizing the use of marijuana, because of the cost of incarcerating offenders and the effect such arrests have on their lives in the long run.

“Let the communities have that discussion and debate. I am not advocating that kids use illicit drugs. I want them to steer clear of it,” said Fairfax. “But people who are arrested for a small amount of marijuana are having their lives ruined. Do we want to continue to throw away millions of dollars incarcerating people?” Fairfax said the state is experiencing an epidemic of Opioid addiction related to heroin and pain killer addiction. He said this issue must be addressed using clinical rehabilitation and treatment.

As an African-American, running for a statewide office, he said he reached out and sought advice from mentor L. Douglas Wilder, the first and only African-American to be elected Lt. Governor in Virginia in 1989. Wilder went on to become the state’s Governor. He called Wilder “one of the great people to talk to on public service because of his campaign in 1989 where he blazed a trial,” said Fairfax. “He defied he odds with his diverse message and he proved he could do the job once in office.

“I like emulating the qualities of a lot of the people I respect and admire,” he said. “They are selfless in their service. A special example is President Obama who has shown class, dignity and discipline despite all of the challenges.” He continued, “Congressman Bobby Scott is a hero of mine who is a fine example of state and national political leadership because of his intellect on the issues and he works hard at serving the people.”