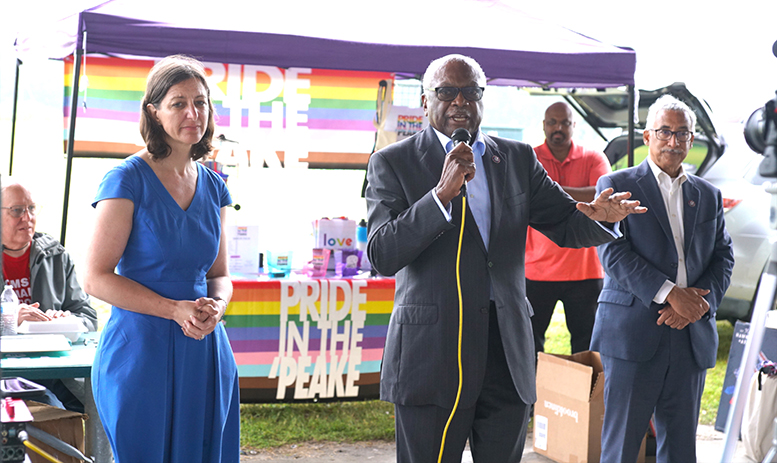 CHESAPEAKE
Democratic House Whip James Clyburn of South Carolina was in Hampton Roads on Sunday, July 10th to spark voting interest in Virginia’s upcoming November midterms. He had a scheduled stop in Suffolk before speaking at the BBQ fundraiser hosted by the Chesapeake Democratic Committee at Chesapeake City Park for its slate of local, state, and congressional candidates in November.

Local activists got a chance to enjoy a plate of BBQ and meet and greet Virginia Congressional incumbents Elaine Luria-D-2nd District and Bobby Scott-D-3rd District, who are running for re-election. City Councilwoman Dr. Ella Ward and Delegate Cliff Hayes were joined by candidates for the Chesapeake School Board and City Council who gave brief remarks.

Congressional candidates Luria and Scott urged attendees to “get out the vote” in order to preserve democratic rights and freedoms for all citizens, which they asserted have been rapidly eroding under Republican leadership and recent Supreme Court decisions. Elaine Luria’s race for the VA’s Second Congressional District has been hotly contested and ruled a political toss-up in recent polls since redistricting removed Norfolk—a reliably Democratic voting block—from Luria’s district and replacing it with parts of Chesapeake, Suffolk, Virginia Beach, Smithfield, Windsor, Franklin, and the Eastern Shore.

U.S. Representatives Elaine Luria, Bobby Scott, and James Clyburn departed and headed to Virginia Beach for a meet and greet with ministers in Virginia Beach. Luria is going to chair the House investigation committee hearing on July14 which has been looking into the January 6 attack on the U.S. Capitol.