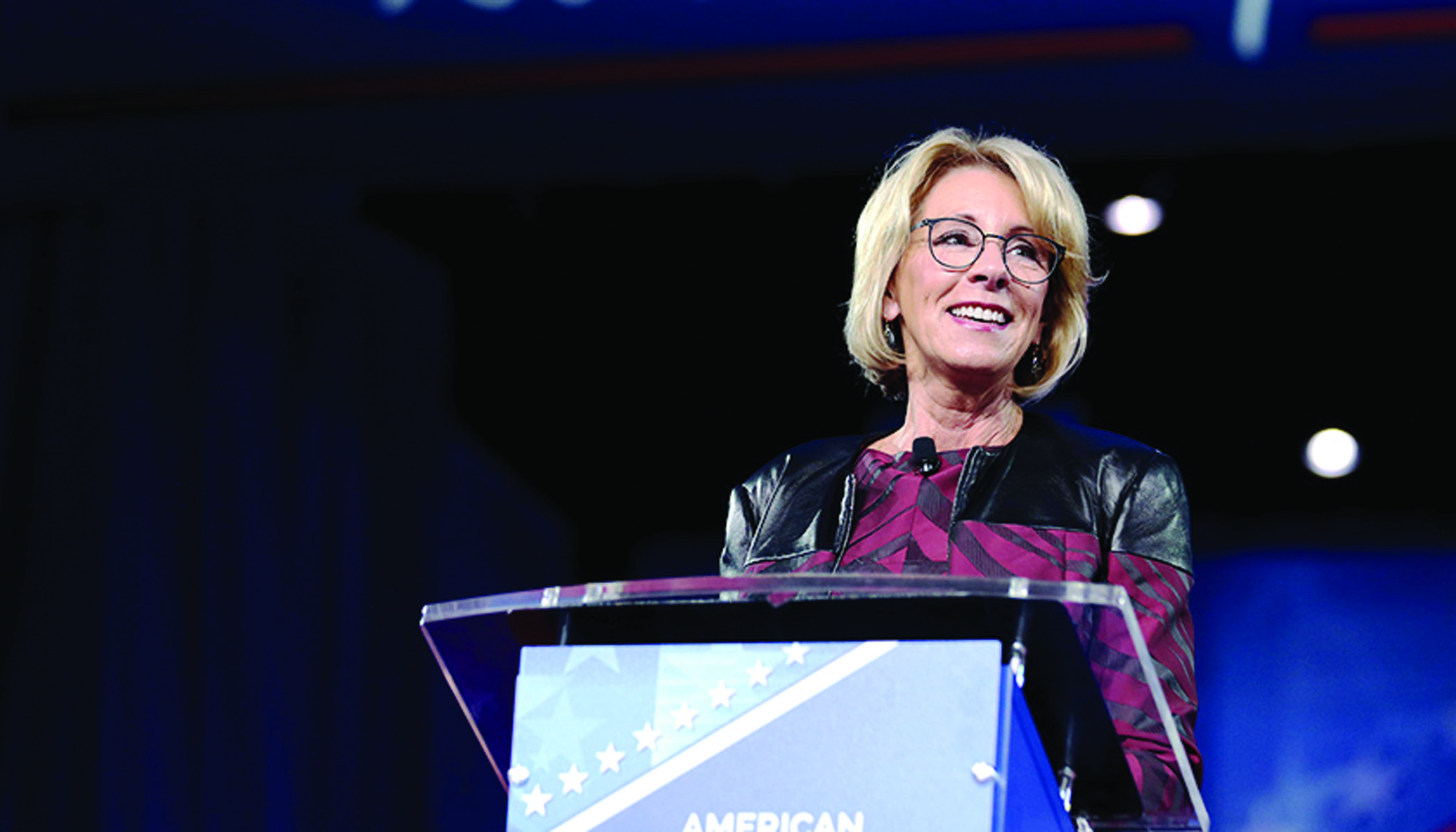 Education Secretary Betsy DeVos will be the keynote speaker for the 2017 commencement ceremony at Bethune-Cookman University. In this photo, DeVos speaks at the 2017 Conservative Political Action Conference (CPAC) in National Harbor, Maryland. (Gage Skidmore/Wikimedia Commons)

The Florida NAACP is calling for the resignation of Bethune Cookman University President Edison O. Jackson, after students booed and turned their backs on U.S. Education Secretary Betsy DeVos, who delivered the keynote address at commencement on May 10.

At one point, Jackson interrupted DeVos to warn protesting students that if they continued to boo, “your degrees will be mailed to you. Choose which way you wanna go.” According to news reports, this is not the first time DeVos has received a negative reception. Back in February, protestors prevented her from entering Jefferson Academy in Washington, D.C.

On the heels of the NAACP’s call for Jackson’s resignation as president, comes a letter of support for the resignation from more than 200 African-American faculty members. Camika Royal, an assistant professor of urban education at Loyola University Maryland and one of three principal authors of the letter, said the message was clear that the students needed support.

“As a graduate of an HBCU, I know how important an education is for an individual, as well as a community,” Royal said, in a recent interview in The Atlanta Journal Constitution. “So, to look at these Bethune-Cookman students have that moment taken away from them and see Betsy DeVos be held up as a speaker, was a slap in the face to them and their families.”

Those who initially rejected DeVos’ visit and later organized the protest against it explained their objections by pointing to clear examples. “This is a person who’s planning to privatize our schools,” said Rachel Gilmer, who works with the Dream Defenders, a Florida-based progressive-leaning youth organization. “They’re planning to gut many of the steps taken to protect student borrowers by Obama … she has made it clear in her words and her actions that she doesn’t care about the futures of Black people.”

The event launched headlines nationwide. And the state branch of the NAACP called for the president’ “to resign effective immediately,” because it had received multiple complaints about the suppression of free speech from students and faculty.

The NAACP said in a recent statement, “Multiple allegations have surfaced including faculty intimidation demanding their silence or risk termination and threats to students by potentially withholding earned degrees and fines for freedom of expression.”

Moreover, the NAACP said it had lawyers who were prepared “to represent faculty and students who peacefully protest (but are) subject to retaliation by the university. Our partners have reviewed the university student code of conduct, and it does not contain any prohibition on peaceful protests and freedom of expression. The NAACP Volusia County Daytona Beach Branch and several attorneys will be on the ground monitoring this situation.”

While DeVos did not directly acknowledge the protesters in her address, she did say the Trump administration would “continue to support” HBCUs.

According to news reports, on May 1 protests began on campus when officials said DeVos would deliver the keynote address at commencement. Some demanded that the invitation be rescinded. Soon an online petition was started by Dominik Whitehead, who is a 2010 graduate of Bethune-Cookman, community organizer and political activist.

“Do not use Bethune-Cookman as a photo op,” Whitehead said, shortly before he delivered the petitions to the administration building. “Come to the table with something that is going to actually do something, in terms of policy, funding.”

The university posted a statement about the situation on its website. According to the statement, 374 students received degrees, 20 students “expressed their freedom of protest during her speech,” and 13 students “were escorted out of the ceremony due to disruption.”

A university spokesperson said, “I am here to celebrate you and all of your achievements. We are all here to applaud your perseverance and to encourage each of you to keep working to reach your full potential.”