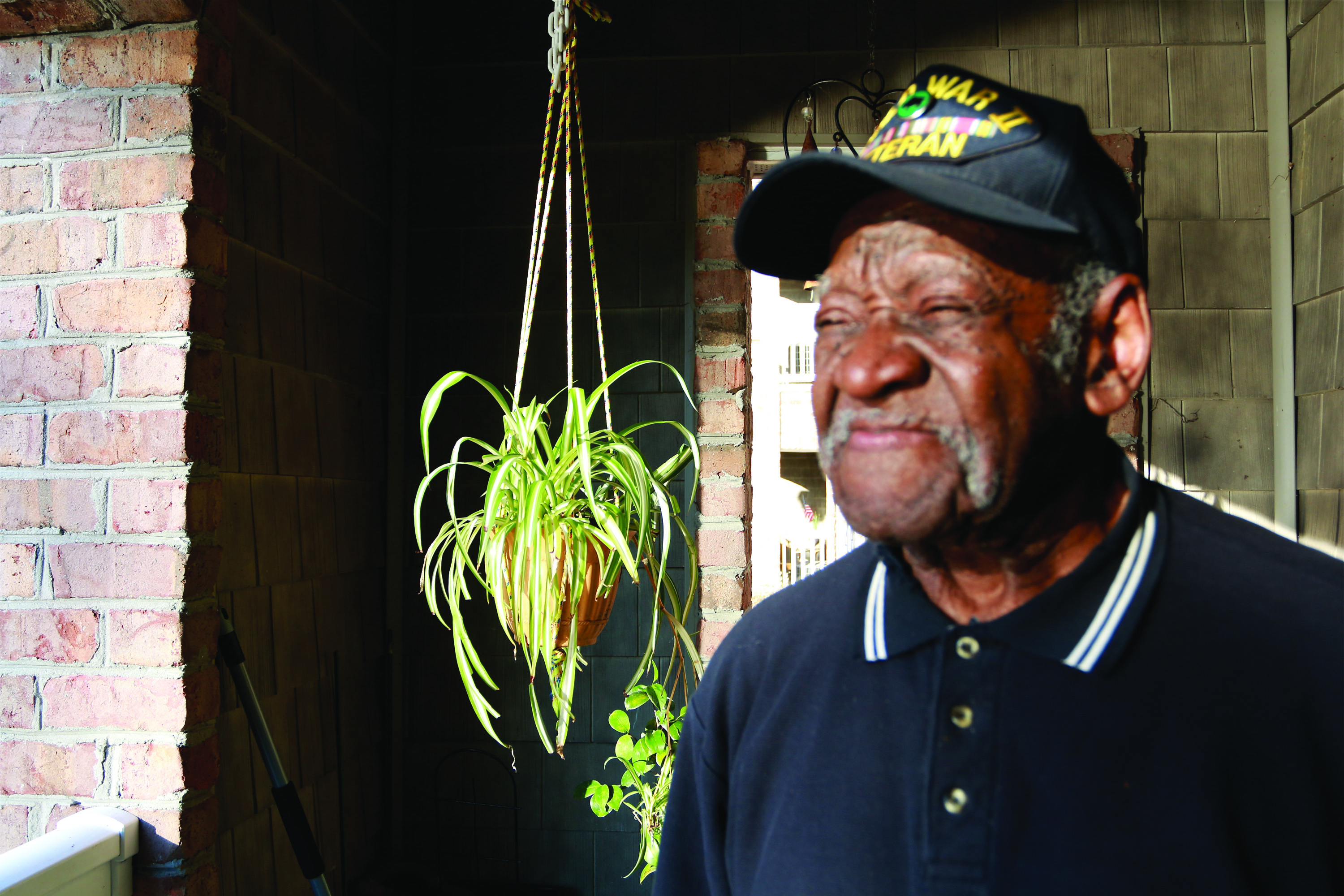 Almost two years after the U.S. entered WWII, Joseph Purvis found himself in the belly of the USS Mitchell bound for North Africa, where he believed he would be fighting for his country against the evil Axis power threatening democracy.

Before he volunteered to enter the Army, the Scotland Neck, North Carolina native had left home and spent time seeking his fortunes in Norfolk and New York.

In Jim Crow, North Carolina, instead of using his first name, an employer just called him “nigger.” In Norfolk and in the Big Apple, he saw a slither of progress, in the form of Black-owned businesses and empowerment.

He volunteered to serve in the U.S. Army in the spring of 1943 while living in New York. In a train bound to basic induction, Blacks, Whites, Italians and Jewish men briefly celebrated their brotherhood together in preparation for war.

But once they reached their destination in Texas, they were reintroduced to Mr. Jim Crow, and thus began a tradition of hostile racial segregation.

In Texas, Purvis was trained to fight like a soldier. From there, he was sent back East to Newport News for departure to the port of Oran, Algeria. There, he found that Uncle Sam had a different assignment for him and other Black warriors.

“I was going to war to fight for my country and I believed we (Blacks) would be treated fairly,” Purvis, now 93, recalled. “But when we arrived at Oran, instead of serving in the 2nd Calvary, we were ordered to unload cargo ships.”

Instead of hurling bullets at German and Italian enemy troops in Northern Africa, Purvis and other Black troops were assigned to the 525 Port Battalion, hurling boxes of bullets and food from cargo ships.

Purvis said many Black or White men would be relieved they did not have to dodge bullets and were relegated to behind the front line duty of unloading cargo.

But he said many Blacks wanted to show White soldiers and officers that they could fight for their country against fascism, just as well as the White boys.

“While sailing to Oran, I was thinking whether I had enough combat training to fight like a good soldier,” Purvis said, during an interview with the Guide. “But we were slaving away in the hot sun, unloading cargo used by the White guys to fight.” His recollections of his time in WWII were collected and written by his daughter, Linda Goss, who submitted them to the Library of Congress, to be saved with those of other soldiers.
Purvis described how Black soldiers were fighting on three fronts.

The first front were the Axis enemy troops; and the second, the White American troops, especially those who hailed from Dixie, and harbored racist views of Black men.

There was a third: people who shared his skin color, but shared the White folks’ view of American Blacks.

“In Oran, the population feared the Black Americans,” Purvis recalled. “… (M)ost of the residents were Black French Africans. I recall Arab kids saddling up to us saying ‘gimme chocolate, Cigarette Joe’ and secretly rubbing our Black hands to see if the color would come off. Those who spoke pidgin English taught to them by White soldiers would say ‘let me see your tail.’”

Purvis said these slights lasted until the Allies launched their invasion of Southern France to begin the advance against the German troops.

Purvis recalls that his unit was transported to the southern French port of St. Tropez in a derelict cargo ship, the Villa De Oran. Every available space was filled with gear his crew would have to unload to be used for the invasion. He recalled, leaving very little for him and his fellow cargo handlers.

Shortly after the ship arrived at the pier, Purvis said two German light aircraft strafed the vessels, and shipboard naval gun crew returned fire.
Many of the troops panicked and jumped in the water, but no one was injured.

The Villa De Oran, Purvis said, returned to Oran, and instead of ammunition and Jeeps, it ferried German Prisoners of War (POWs).

“When we returned (to Oran), it was raining as if the world was washing away,” said Purvis. “The German POWs were taken off the ship by the White soldiers and allowed to seek shelter under the nearby sheds. We Blacks were ordered to continue to slave in that awful storm.”

Purvis recalled that his unit was stationed in a makeshift camp on the outskirts of Oran. At one point he recalled one of his fellow soldiers by the name of “Wild Bill,” a trained sniper, “lost it” and was firing at his comrades before being subdued and hauled off to the guard shack.

At one point a notice was posted for volunteers to serve on the front lines with the 82nd Airborne or the 92nd Division. Purvis and the Black soldiers, who saw a chance to see combat and escape the military-imposed segregated hell of Northern Africa, volunteered to serve in the ranks of the 92nd.

The volunteers were loaded on a U.S. Liberty ship and it set sail for a brief stay in Naples, Italy.

Shortly after, Purvis said he was thrown into combat, something he and fellow Black men had desired since entering the service.

“In August (1944), I joined C Company, 370 Regiment, and started doing what I had (been trained) and volunteered for. No question about it. Fighting in war is hell … crawling through sh’t, shangles and shells is real hell.”

“I can’t recall if I ever killed anyone,” recalled Purvis. “We were trained to just shoot in the direction of the enemy. But I earned my keep as a Buffalo Solider from the Arno River to the Apennine Mountains. I know about Mount Pisano, Lucca, La Spezia and Masa, where we saw battle.

“The Italians welcomed us after we were allowed to stand up and fight like men.

“I remember the spaghetti was white with no sauce,” Purvis recalled. “When they ask if I wanted more, I said the wrong Italian word for ‘no’ and they kept putting spaghetti on my plate. They treated us like we were humans and shared their meager food with us.”

Purvis recalled that his outfit fought its way to Carserta, Italy, along with various all-White units. After days of fighting German and the remainder of the Italian forces, Purvis said he and other Black troops had fights with their “comrades in arms,” the Whites who tried to keep Black troops from entering eateries and movie theaters.

Purvis said his days as a front time Buffalo soldier ended fighting “side by side” with the 442nd Nise which was composed of Japanese Americans, another group of brave souls that White soldiers deemed as outliers.

The war ended, operationally for the U.S. Allies in May of 1945. In December, Purvis boarded a liberty ship at Naples bound for home.

Until the vessel hit an Atlantic storm, many of the 500 soldiers were celebrating the victory and the fact they survived.

Purvis recalled being elated returning to the states and hoped his sacrifices overseas would spawn freedom over here at home.

“I was in my new uniform with all my medals and badges, back at Camp Pickett, Virginia and I went to the U.S.O. club for a drink and to listen to the latest music,” he recalled. “I was sitting with a White soldier listening to some music and enjoying myself when three MPs came up to the table.

“‘Boy, don’t you know this is the White folks’ night,’” Purvis said. “They grabbed me and my feet did not touch the floor and dragged me across the floor and threw me out the door. All I had gone through in war – that was the most embarassing moment of my life.”

“After that I decided to leave the military,” said Purvis. “And I did not feel too good about my country. I wondered if we would ever overcome the racism and hatred in this country.”

After the war in Europe, Purvis headed back to New York. There he met his wife Christine, who was easily approachable because she was a “country girl” from Scotland Neck, too.

“New York eventually got to be too much for them so they wanted to move back South,” said Linda Goss. “They did not want to go back to Scotland Neck. So they chose Tidewater because it was close to North Carolina and it provided employment for Dad, who landed a job as truck driver, and Mom was always a housewife.”

The Purvis’ marriage produced three offspring, starting with Ronald in 1948 and then Linda and then Diana, by the time they moved to Norfolk in the early 50s. The couple still lives in Norfolk and are members of Covenant Presbyterian Church.

Mr. Purvis says the pages of the nation’s history book since his wartime duty indicate that his desire for a post-racial world will never come in his lifetime.

But, as the Civil Rights Movement sprang to life in the mid-1950s and onward, he says there have been signs that the darkness of racism is being replaced with a slither light of progress.

He has witnessed progress, as Blacks have assumed positions of professional, political and social power he could not imagine in pre-war North Carolina.

He has seen the elections of the country’s first Black state governor in Virginia and its president of the United States. “There have been signs that the world is moving ahead and then – we see darkness again, especially these days,” said Purvis. “But I hope we do not go back to those days before I got in the Army. My grandchildren and their children will see racism but not like I did.

“I fought in that war to save democracy and freedom. But I know that the war is not over. We still have a ways to go.”