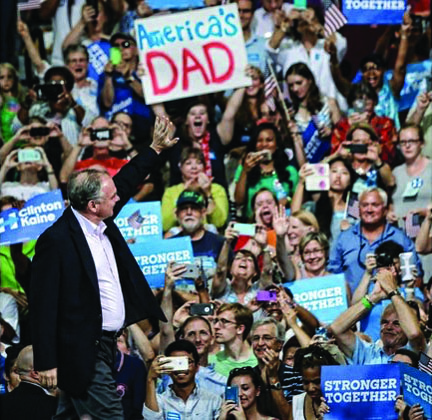 (TriceEdneyWire.com)
Weeks after presidential candidate Hillary Clinton named him her running mate, Sen. Kaine appears comfortable and confident in the national spotlight. However, the former Richmond mayor and ex-Virginia governor acknowledges he’s still getting used to the quirks of being elevated to another level in the political universe. For one thing, the 58-year-old said he was surprised to find himself “described as the dorky dad” in the deluge of Twitter comments after he accepted the party’s vice presidential nomination.

“That’s different,” he said from any of his past experiences on the campaign trail. And as recognizable as he is already, it has become far harder for him and wife Anne Holton to move around without attracting notice. When he ran for Richmond and statewide offices, Sen. Kaine and Ms. Holton – the daughter of a former Virginia Republican governor, a former legal aid lawyer, a former juvenile court judge, a former Virginia first lady and former state secretary of education – used to be able to breeze almost unnoticed into their Laburnum Park neighborhood in North Side.

Now they’re learning to live with a detail of Secret Service agents and Black government SUVs conspicuously parked outside the house on Confederate Avenue where they’ve lived for 32 years, though the couple rarely expects to be there during the next 90-plus days of this whirlwind campaign. It has been an adjustment, Sen. Kaine said in an interview with the Free Press following a celebratory homecoming rally at Huguenot High School (August 1), where at least 3,500 prospective voters turned out to hear him.

“I don’t think she will mind me telling you that she burst into tears when we got home last night,” Sen. Kaine said of his wife. “Maybe it was exhaustion and everything that has been going on, but she also was concerned about the impact we’re having on our neighbors. They’re telling me they don’t mind. One neighbor told me, ‘We now live on the safest street Richmond.’”

The bulk of Sen. Kaine’s speech (August 1) reprised remarks he has made since joining Mrs. Clinton as her running mate – praise for Mrs. Clinton and salutes to her vision for the country, coupled with stiff attacks on Republican candidate Donald J. Trump as a trash talker unfit for the nation’s highest office. For more than 20 minutes, he took a personal verbal detour from the campaign to speak of how he has grown from “an incredibly naïve member of City Council” to a seasoned politician.

Sen. Kaine, who has spent most of the past 22 years in public office, beginning with his initial election to Richmond City Council in 1994 that he won in a squeaker, told the crowd that “what I know about public service, you have taught me.” Born in Minnesota and raised in Kansas City, Mo., he said he “grew up in a very, very nonpolitical household. Politics was something in the newspaper, like Hollywood and baseball. We never knew anybody who did that. So everything I know, everything I’ve learned … I’ve learned from you.”

He talked about the people he and his wife have worshipped with at St. Elizabeth’s Catholic Church, the small, mostly African-American parish in Highland Park where he and his wife were married and their children were baptized. “Every time we interact with somebody, we come to know something about the greater good and greater power in the world. And I learned that through these wonderful parishioners and through my neighbors, and then in my civil rights practice of 17 years, through my clients and through the lawyers I worked with, and through the lawyers on the other side of the cases.”

Among the things, he said learned: “We’ve got to have the right leadership in this country.” He said the challenge ahead is to win. “We have a great candidate who’s going to be a great president, and Virginia is right at the center of this thing,” he said.