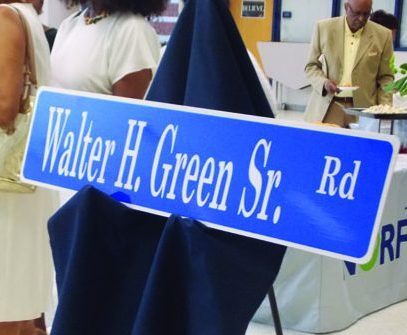 Last Thursday the City of Norfolk wrapped its arms around the memory of the late Walter H. Green Sr. by renaming Philpotts Road in his honor. It was a warm embrace. Although the official name of the street remains Philpotts Road, signs with the honorary designation will be placed at various corners along the street. The renaming is fitting because of the vital role he played in turning “a country road into a city street.”

Norfolk’s popular new mayor Kenneth C. Alexander presided over the ceremony at the new Norview High School. Although 175 individuals returned RSVPs for the ceremony, the audience in the auditorium numbered over 200 including dignitaries U.S. Rep. Bobby Scott, House of Delegates member Daun Hester, Norfolk Councilwoman Angela Williams Graves, Chairman of the School Board Rodney Jordan, New Journal and Guide Publisher Brenda Andrews and scores of other Walter Green admirers. Walt’s wife of 57 years Alveta and his three children Alveta, Darlene and Walter Jr. scanned the filled auditorium with opened eyes and wide smiles. She gave Norfolk’s mayor high marks for his work. Even before the ceremony began, Walt’s daughter Darlene raced around the auditorium taking photographs.

“I’m taking everyone’s picture today – that’s what my dad would have wanted,” she explained Walt’s son Walter H. Green Jr. was the first speaker and the audience hung on his every word. “He’s the spitting image of his father,” more than one attendee commented. “The girls are as pretty as their mother.” Like Walter Sr., his wife Alveta has given a lifetime of service to Norfolk. She is a career teacher, published children’s author, school board member and two-time city councilwoman.

“We moved to Philpotts Road in 1960 with three toddlers,” she began. “My husband absolutely loved Philpotts Road.” She concluded her remarks by reading “The Bridge Builder,” a poem about a man who builds a bridge, not for himself, but for the next generation. It could have been written about Walter H. Green Sr. The audience rose to its feet with a standing ovation.

That evening WAVY-TV anchor Tom Schaad hailed Walter H. Green Sr. as a “pioneer of change” during his on-air report on the ceremony. Walt and Alveta met at Booker T. Washington High School in chemistry class. Walt was the captain of the basketball team and Alveta was the class beauty. The couple didn’t have their first date until Walt was enrolled at North Carolina Central College in Durham, NC. They went to a football game between the Norfolk Division of Virginia State (now Norfolk State University) and Virginia Union College at the old Community Field.

When the driver of their Broadway Cab made a sharp turn, Walter stole his first kiss from Alveta. That kiss led to their wedding on July 20, 1957 at St. Joseph’s Catholic Church near Cumberland and Freemason streets. Walt was a bridge builder in so many ways – in the community, in the schools and in the city. Everybody at the ceremony had their own special Walt Green story.

The late Johnny Brown, his principal at Granby High School, credited Walt with the “smooth desegregation” of the high school in the early 70s. “Walt was so comfortable in his own skin that he made us comfortable in our skins,” Brown recounted in a 2012 interview. “He was simply charming. I guess that’s the only way he could have gotten such a beautiful wife,” Brown added with a wink.

After the ceremony, U.S. Congressman Bobby Scott said of Walter H. Green Sr.: “The city is a better place for all of his work.” Life wasn’t always easy for Walt and Alveta. They attended segregated schools. A cross was burned in the field next to their home. Their car was overturned in their driveway. However, they forgave and always looked to the future. Rather than divide, they brought people together. Walt and Alveta were a team of bridge builders. Walter H. Green Sr. Street, the memory of Walt and the Honorable Alveta L. Green will continue to bring people together. That’s their legacy.