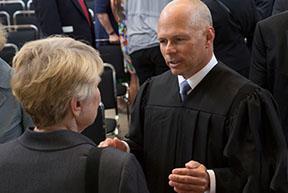 On July 29, a federal court in Wisconsin joined Texas and North Carolina in striking down voter suppression efforts. The recent ruling in Wisconsin blocked several restrictions including requirements that each city have only one polling place for early voting, an extended residency requirement for city wards, and strict rules governing what can be used as voter ID, according to the Milwaukee-Wisconsin Journal Sentinel.

In a 119-page ruling, federal judge James Peterson also turned back other election laws Republicans have put in place in recent years. Peterson said the state legislature enacted strict voter-ID laws as “an overreaction to the perceived threat” of “a preoccupation with mostly phantom election fraud.” Peterson, who was appointed by President Barack Obama in 2014, concluded many of the election laws violate the First Amendment right to free speech, the Fourteenth Amendment guarantee of equal protection under the law and the Fifteenth Amendment protection of the right to vote.

“The ruling will not change any of the rules for the Aug. 9 primary,” the Milwaukee-Wisconsin Journal Sentinel noted. “But – if kept in place – it will reshape how the Nov. 8 general election is run.” Last week, a federal judge in Milwaukee determined voters in November could cast ballots without showing ID if they submitted statements at polling places saying they could not easily get a state-issued ID card.

Black and Hispanic voters, meanwhile, were clear targets, according to a ruling on July 20 in Texas. There, nine of the 15 appellate judges who heard the case in the Fifth Circuit Court of Appeals said Texas’s voter-ID law had a racially discriminatory effect. Of the ruling in Texas, the Washington Post reported, “The 5th Circuit, one of the most conservative in the country, declined to strike down the law completely but said provisions must be made to allow those who lack the specific ID the law requires to be able to cast a vote.” Black, Hispanic and poor voters were most likely to be affected, the court found.

Chad Dunn, a lawyer for some of the Texas plaintiffs said of the ruling in The Washington Post, “It is a watershed day in the protection of voters in Texas who have recently been under attack by state leaders.” In North Carolina, in another federal court case, the Fourth Circuit ruled hours before the Wisconsin ruling: Black voters were clearly targeted “with almost surgical precision.”

In North Carolina, a sweeping 83-page decision by a panel of the United States Court of Appeals for the Fourth Circuit upended voting procedures in that state, which is a battleground state about three months before Election Day. According to The New York Times, “The North Carolina ruling tossed out the state’s requirement that voters present photo identification at the polls and restored voters’ ability to register on Election Day, to register before reaching the 18-year-old voting age, and to cast early ballots, provisions the law had fully or partly eliminated.”

The North Carolina ruling also held that the ballots of people who had mistakenly voted at the wrong polling stations should be deemed valid. The Advancement Project, a national multi-racial civil rights organization among the groups that brought suit challenging the N.C. law, said that voters in North Carolina “have been held hostage” since the law was enacted almost three years ago. “We are gratified that the 4th Circuit Court of Appeals recognized that North Carolina’s monster voter suppression law violates the Voting Rights Act and the United States Constitution,” said Denise Lieberman, Senior Attorney with Advancement Project.