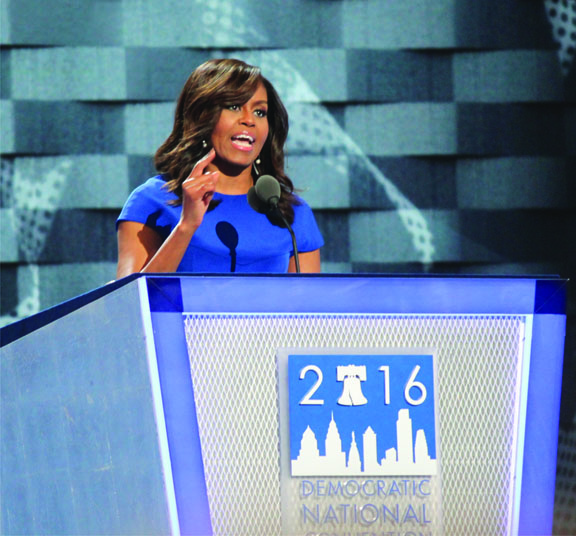 PHILADELPHIA, Pa.
(TriceEdneyWire.com)
First Lady Michelle Obama was once again the star of the recent Democratic National Convention with her delivery of an electrifying speech that wowed a convention audience – which was still divided between Hillary Clinton and independent Bernie Sanders when it began on Monday. In a speech punctuated with repeated applause and cheers, the first lady sought to convince a hostile audience – in the arena – and the millions watching by television and Internet, to unite behind former Secretary of State Hillary Clinton as the person that must lead America to its next level – instead of her opponent Republican Donald Trump.

“I want a President who will teach our children that everyone in this country matters – a President who truly believes in the vision that our founders put forth all those years ago: That we are all created equal, each a beloved part of the great American story,” she said. She sought to describe the difference between Clinton and Trump, known for his name-calling and vitriolic expressions of prejudices. “And when crisis hits, we don’t turn against each other – no, we listen to each other. We lean on each other. Because we are always stronger together.”

She continued, “And I am here tonight because I know that is the kind of president that Hillary Clinton will be. And that’s why, in this election, ‘I’m with her,’” she said to applause as she quoted the popular motto on the thousands of placards, T-shirts and political paraphernalia in the room. She alluded to Clinton’s well-known affinity for public policies that improve the lives of children; praised her choice of former Virginia Gov. Tim Kaine as vice president; and compared her to the people who lined up to give blood for the victims of the Orlando terrorist attack.

She also credited her as a woman presidential candidate for “putting those cracks in that highest and hardest glass ceiling until she finally breaks through, lifting all of us along with her.” Michelle Obama then dropped the portion of the speech that drew the most vigorous applause of the night:

“That is the story of this country, the story that has brought me to this stage tonight, the story of generations of people who felt the lash of bondage, the shame of servitude, the sting of segregation, but who kept on striving and hoping and doing what needed to be done so that today, I wake up every morning in a house that was built by slaves and I watch my daughters – two beautiful, intelligent, Black young women – playing with their dogs on the White House lawn. And because of Hillary Clinton, my daughters – and all our sons and daughters – now take for granted that a woman can be President of the United States.”

A meeting of Unity 16, a coalition of Black-led organizations, met during the convention, where dozens of leaders sought answers to the possible backlash of non-voters. Daniel C. Bradley, Black Youth Vote national coordinator, says he is having to work hard to change minds as he organizes young people. “There’s a big disconnection with this generation between the understanding the power of their vote because they are feeling like their vote doesn’t matter and doesn’t count. And so, why vote at all?” he said. “And so the work that we’re doing now is to make sure they know that their vote not only matters and does count, but also making them understanding they [they] are by not voting still voting. You’re voting for another candidate.”

He continued, saying the key is to explain the significance and strategy behind the act of voting. “And so we’ve been asking people what kind of American do you really want?” He said at Black Youth Vote, which is under the National Coalition on Black Civic Participation, “we try to make them understand that all politics is local. That it’s not only important to vote in their presidential election, but voting the whole ticket and being engaged in the whole ticket.”

He said they explain to young people that they can make a difference in criminal justice for voting for their choice of a state’s attorney and in the educational system by voting for a school board representative … If you want to see components of your life change, that’s how you do it. You vote.” With a regular election record of at least 90 percent Black support for the Democratic Party, the leaders are apparently taking nothing for granted. First Lady Michelle Obama, who also rendered a spellbinding speech in the 2012 convention for the re-election of her husband was clear this year on what the election of Hillary Clinton will take:

“In this election, we cannot sit back and hope that everything works out for the best. We cannot afford to be tired, or frustrated, or cynical,” she said. “Hear me. Between now and November, we need to do what we did eight years ago and four years ago: We need to knock on every door. We need to get out every vote. “We need to pour every last ounce of our passion and our strength and our love for this country into electing Hillary Clinton as President of the United States of America. Let’s get to work.”