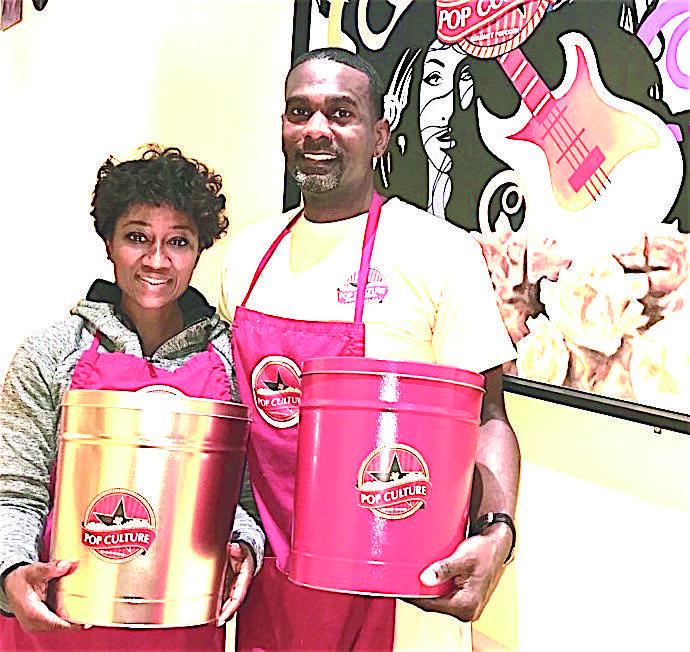 For over 20 years, until last spring, Omar K. Hasan served as an enlisted man and then a commissioned officer in the U.S. Navy protecting his nation from foes far and near.

But today the Flint, Michigan native is an entrepreneur, serving 32 varieties, and expanding, of tasty popcorn in downtown Norfolk.

Hasan’s newest duty station is called Pop Culture in Suite 100 at 112 Granby Street, one of the busiest patches of enterprise in the city’s downtown business district.

His wife, Navy Commander Charleese Sampa is his business partner. She is second commander of a military unit at Dam Neck.

Hasan said the duo chose Granby Street because of the presence of the restaurants, shops and other businesses along the historic thoroughfare, which has made downtown a commercial and entertainment destination for not only Norfolk residents but people from other areas.

Pop Culture sits several doors down from the new Main Hotel, and just blocks away from the revised Waterside Festival Market Place and MacArthur Mall.

Hasan opened his shop after several months of outfitting his suite with the equipment needed to cook, prepare and store his product.

After investing about $40,000 of his family’s money into the enterprise, Pop Culture open in June. Foot traffic has been relatively good.

He is developing a variety of promotional ideas using traditional and social media to spread the word about his offerings.

Right now he is the only retail popcorn vendor in downtown Norfolk; one of two in the region.

“I want to be the popcorn king of Norfolk and Hampton Roads,” he said. “But that will take time and we are optimistic. We think we have a great location and great product.”

Recently during the local and national observance of the contributions of the Navy, Hasan prepared a special ‘patriotic’ mix of tins of popcorn for gift packages for veterans and current military personnel.