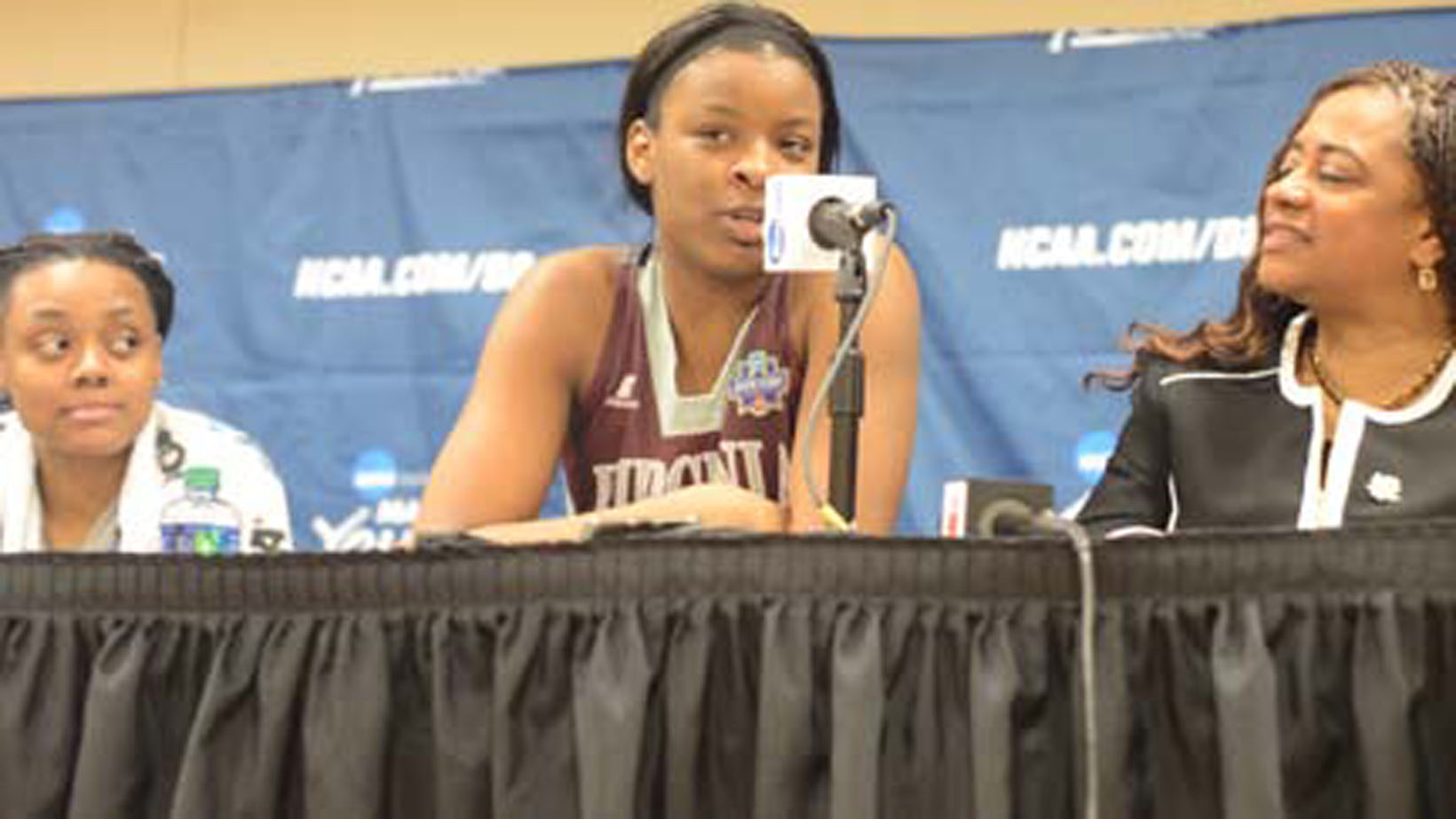 Virginia Union senior center Lady Walker (c.) is flanked by junior forward Alexis Johnson (l.) and Lady Panthers head coach AnnMarie Gilbert (r.) as they address the media after VUU fell to Ashland 93-77 in the NCAA Div. II women's national championship game Friday in Columbus, Ohio. Walker had 19 points and 12 rebounds while Johnson led VUU with a gamehigh 28 points. Both Walker and Johnson were named to the all-tournament team. Gilbert has led the Lady Panthers to backto- back Elite Eight appearances. VUU fell in the national quarterfinals a year ago.

COLUMBUS, Ohio
The ladies of Virginia Union University, who staged second half comebacks to knock off second and third seeds and get to Friday’s NCAA Div. II national basketball championship game, could not pull it off a third time as they fell to top seed and undefeated Ashland University, 93-77.

“It’s just tough to kind of figure out how to slow down this Ashland team,” said second-year VUU coach AnnMarie Gilbert.

“It’s a team that plays a different style that any team that we’ve faced. It’s not so much that they are fast afoot, they are extremely efficient. They’re hard-nosed and don’t take a play off. They’re just a well-oiled machine. Kudos to them on an outstanding season.”

But VUU did not go down without a fight. Though never leading at the end of any quarter, the Lady Panthers battled and took leads in the first and second quarters and never trailed
by double digits until the last play of the third quarter when AU’s Maddie Dackin’s made two free throws to send the Lady Eagles into the final quarter up 68-58.

Between the last 1:34 of the third quarter and first 2:21 of the fourth, VUU went scoreless until Alexis Johnson’s 3-pointer cut the lead to 75-61. The 11-3 Ashland run all but ended the Lady Panthers’ chances.

The game was played before a raucous capacity crowd of 2,200, about 2,000 of them rabid Ashland fans who filled the arena at Ohio Dominican University just 82 miles from the school’s Ashland, Ohio campus.

VUU’s undoing was its inability to slow down the Eagles, a bevy of misses in close on the offensive end and a 5-of-15 performance at the charity stripe. “All the little things we did for us to get here, we just failed in some of those areas today,” said Gilbert.

Johnson, a talented 6-foot junior forward, led VUU with a game-high 28 points canning 12 of 24 shots from the field including 3 of 4 from behind the arc. Six-two senior center Lady
Walker scored 19 points and had a game-high 12 rebounds in her last game in a VUU uniform. Both Johnson and Walker were named to the all tournament team.

“The ball just wasn’t going into the basket,” said Johnson. “Those are easy shots we usually make but tonight they just weren’t falling.”

Ashland evenly distributed minutes between eight players and had five score in double figures led by 19 points from freshman Jodi Johnson. Junior Laina Snyder, named the tournament’s
most valuable player, added 17 points. After posting a 21-18 rebounding edge in the first half, VUU was out-rebounded 37-34 for the game.

“We played come-from-behind in the two previous games but I just knew we couldn’t get down to Ashland,” said Gilbert.

The Eagles, champions of the Great Lakes Intercollegiate Athletic Conference and Midwest Region, won each of its three games in the Elite Eight by double-digits and had not trailed prior to meeting the Lady Panthers.

“But we fought,” said Gilbert. “We were never really in it but never totally out of it. I’m just proud of the statement we made.”

After losing in the CIAA Tournament’s semifinal round, the Lady Panthers regrouped and took the Atlantic Region title for the second straight year to earn a return trip to the Elite Eight.

“I’d also really like to say how proud I am of our young ladies,” said Gilbert. “Our goal was to make it to the Elite Eight and see how far we could go from there. I’m just so proud of the run and the journey it took to get here.

“People know about Virginia Union. We are a program on the rise. We’re rebuilding. We’re a program that won a national championship in 1983. We’re back!”

“We weren’t that good my first two seasons,” said Walker. “It took for us to get coach G (Gilbert), one of the best coaches in the country, for us to get back here. Since she set foot on the campus of Virginia Union University that’s been her mindset.”

“It was a learning experience,” said Johnson. “We’re just going to come back stronger and learn from our mistakes.”