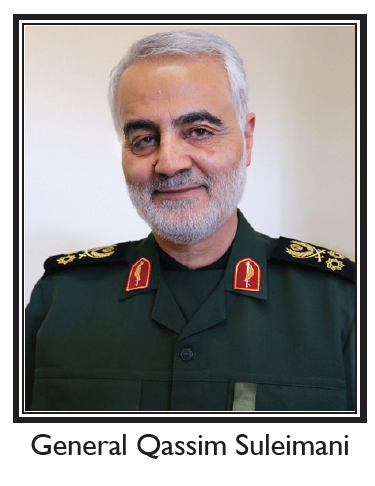 It has come to this. An impeached president — still pending trial in the Senate — orders the assassination of a leading Iranian general as he is meeting with the leader of Iraq, a supposed ally. He does so without consultation, much less approval, of Congress. Besieged at home, he lashes out abroad.

This president ran on the promise to end the “endless wars” in the Middle East. Earlier, he ordered and then wisely called off bombing strikes on Iran, saying that he did not want a war. Now he claims that he has acted to stop a war, not start one.

He is either deliberately misleading the American people or deluding himself. Assassination of a foreign official is not the road to peace; violence almost inevitably begets violence. He has acted on what his own officials call “razor-thin” evidence, shocking his own military advisers. U.S. presidents now claim the right – and have the capability – to target and assassinate anyone in any place, foreigner or citizen, if they decide – on the basis of secret and often scanty intelligence – that the person may be considering an attack on U.S. allies or soldiers or representatives in the future. They call this potential threat evidence of an “imminent attack,” to pay mock respect to the international law that they are trampling.

General Qassim Suleimani is portrayed as a terrorist with American blood on his hands. But he was not a stateless terrorist. He was a high official in a foreign government with which we are not at war. Assassinating him is an act of war. Ironically, Iran and the Shiite militias in Iraq that Suliemani guided were leading, if unacknowledged, allies in the fight against ISIS, who are largely Sunnis.

Similarly, those who attacked the U.S. on 9/11 were Sunnis, almost all from Saudi Arabia, funded largely by Saudi money. Taliban in Afghanistan are Sunni. The attack on Yemen was led by Saudi Arabia, which is Sunni. Iran fought against ISIS in Iraq and Syria. Yet, somehow, it has become Trump’s leading target.

The road to this escalating conflict can be traced back to Trump’s perverse hatred of all things achieved by former President Barack Obama. One of Trump’s first acts was to pull the U.S. out of the Iran nuclear pact, over the objections of our allies and his own military advisers.

He ramped up sanctions on Iran, seeking to force them to surrender to a “better deal.” The result has been escalating tension and violence, as Iran has demonstrated – in attacks on Saudi oil facilities and on tankers in the Persian Gulf – that it has the capacity to strike back. Now, after the assassination, the entire region girds itself for the retaliation that has already been promised. This is utter folly.

Under George Bush, the U.S. destabilized this region by invading Iraq. That calamity has fostered escalating violence. Obama added to the mess seeking regime change in Syria and in Libya, spreading the chaos. Trump was right when he said it was time for the U.S. to get out of the Middle East.

We have no stake in the spreading conflict between Sunnis and Shiites. We have no desire to send the hundreds of thousands of troops needed to win a war or enforce a peace. All we are doing is squandering American lives and resources in an armed presence that simply adds to the violence without leading to a resolution. Why has Trump abandoned his campaign promise? Why did he abandon his wise decision not to strike Iran earlier? The only thing that has changed is that he has been impeached. Is he ramping up violence abroad to distract from the overwhelming evidence of his offenses? Is he using the U.S. military as a political campaign prop?

Congress needs to pass a renewed war powers resolution instructing the president to bring the troops home, not send more of them to the region. If Congress cannot curb a rogue president, then this republic is in deep trouble. And the American people and its soldiers are headed deeper into wars without victory and without end.