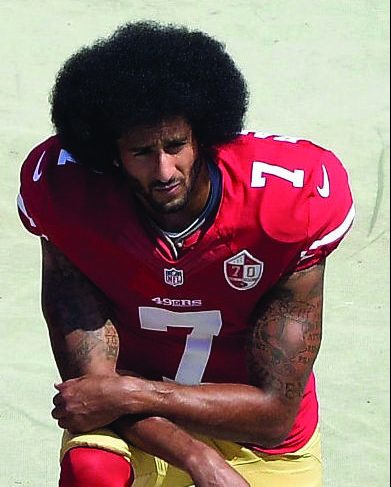 Instead of focusing on how more people are supporting former San Francisco 49ers football quarterback Colin Kaepernick because he can’t seem to get a job in the National Football League for kneeling during the playing of the national anthem in August 2016 – focus on the eulogies that Muhammad Ali received at his funeral on June 3, 2016.

In other words, racial discrimination is still a tired, sad, and largely useless story that goes something like this. Kaepernick said he knelt at a 2016 football game to protest racial injustice and police brutality against minorities. Ali spoke along the same lines when he protested the Vietnam War in the 1960s. But that is not the end of the tale. Recently a white NFL player, Seth DeValve, a tight-end for the Cleveland Browns, said he knelt while the American national anthem was being played because of the recent white supremacy protests in Charlottesville. A white supremacist drove a car through a group of people on the streets, killing one and injuring 19.

The point is racial discrimination is still a sick old sad tale. It goes something like this. Muhammed Ali was barred from boxing in 1967 for refusing to fight in the Vietnam War. Yes, Ali declared himself a conscientious objector. Yes, Ali’s decision transformed him from a world heavyweight champion into an unemployed boxer. No, Ali could not land a gig as a prizefighter, like Kaepernick cannot get a gig as a quarterback in the NFL, which will begin its regular season on Sept. 7.

In other words, Ali and Kaepernick heard the familiar-sounding yes or no that some offer to justify racial bigotry. But Ali’s impact is crystal clear. Ali died at age 74 and was eulogized in Louisville in June 2016. This means while many are still trying to define the impact that Kaepernick’s protest will have on social injustice, Ali’s impact on the Vietnam War is crystal clear.

Many well-known personalities lined up to deliver eulogies to “The Greatest.”

Bryant Gumbel said at Ali’s funeral, “What does it say of a man that can go from one of the country‘s most polarized figures to the most celebrated?”

This means Ali ran into a yes here – a no there. But his professional setbacks are historical footnotes – faded headlines – water under the bridge. Because about four years after Ali was legally barred from boxing in 1967 for refusing to fight in the Vietnam War, Ali returned to the ring and won numerous rounds including his 1971 “Fight of the Century” match. While both boxers were guaranteed $2.5 million, Ali lost the match to Joe Frazier but still collected $2.5 million. Later, he beat Joe Frazier but regained his title in January 1974. Ali also won “Thrilla in Manila‘‘ after 14 brutal rounds in 1975. Later, Ali beat Leon Spinks in 1978.

The point is Ali’s impact on the Vietnam War did not hinge and swing on a random yes or a random no from a bigot. Instead, Ali intentionally transformed his defeat into a symbol of freedom and justice during his government-imposed exile from the ring. Ultimately, Ali’s impact on the Vietnam War was evident. He “became a three-time world heavyweight champion, who would sit with presidents and meet with kings,” AOL noted in a 2011 piece titled, Fight of the Century: Muhammad Ali‘s Legacy Grows in Defeat. Ali arguably “became the most recognized man in the world.”

More important, Ali “won over,‘‘ his critics, AOL noted, because he saw his demise as a detour.“ It was a lesson of humility. It served as a genesis for one of his many comeback narratives.”

Is history repeating itself? Kaepernick’s seeming demise has produced an increasing number of supporters. People of all races are supporting Kaepernick, like people of all races supported Ali, who suffered disgrace but became a shining symbol for justice and equality.

News reports show the flags were lowered in Ali’s hometown, Louisville, after he died in June 2016. Ali’s funeral procession stretched out for about 20 miles, according to news reports. And people from all walks of life attended Ali’s funeral at the KFC Yum! Center which began at 3 p.m.

At Ali’s funeral, former U.S. President Bill Clinton said, “I think he decided very young, to write his own life story. . .He decided first to use these stunning gifts: his strength and speed in the ring, his wit and way with words in managing the public … at a fairly young age.”

Of the NFL’s decision to seemingly Blackball Kaepernick, Rev. Jesse Jackson said in recent news reports, “He should have the right to express himself. He’s not burning the flag, he’s not hustling drugs to teammates, he’s not shooting people with guns.”

In plain terms, Kaepernick’s support is growing. A few days before Jackson and NYPD officers spoke out, the NAACP sent a formal letter of support to NFL Commissioner Roger Goodell, requesting a meeting. Meanwhile, a steady stream of NFL players are challenging the league including players with the Philadelphia Eagles, Los Angeles Rams, Oakland Raiders, Seattle Seahawks, and Tennessee Titans, according to ABC News. Meanwhile, film producer Spike Lee continues to send out supportive tweets.

More important, Shad Khan, the owner of the Jacksonville Jaguars recently said he is open to signing Kaepernick. But Khan said the decision to hire Kaepernick would ultimately be made by top football executive Tom Coughlin, who has thus far shown no known interest in pursuing Kaepernick or any other free-agent passer.

But, try to focus on the facts. Ali found a job in the late 1960s. So Kaepernick can survive his demise by thinking like Ali, who received knockout eulogies from many including a priest, an imam, a rabbi and a monk, a former United States president and a famous comedian.

Specifically, the Vietnam War ran from Nov. 1, 1955 to April 30, 1975. The very first protests against the Vietnam War started in 1945, when US Merchant Marine sailors condemned the U.S. government for using ships to transport French troops to “subjugate the native population” of Vietnam. During the next two decades, protestors demonstrated on many campuses including Yale, Berkley, Kent State, and West Point. Twelve young men in New York burned their draft cards in 1964.

This means Ali joined a wildly popular movement back in the day like Kaepernick. His supporters continue to increase and include The Justice League NYC and Color of Change. Both groups recently supported Kaepernick by holding protests at NFL headquarters, according to news reports.

But Ali lived in an era when everybody saw everything in terms of Black and white, including the family TV. That’s over. Kaepernick lives in an age, where an Instagram or Facebook post, or a tweet can deliver a mean punch to the eye or a helpful shot of adrenalin.

Since the Bible says there is nothing new under the sun: consider this. It is impossible to measure Kaepernick’s impact on racial injustice and police brutality in 2017. But Ali’s eulogies prove he helped to end the Vietnam War. Specifically, the Vietnam War ended on April 30, 1975.