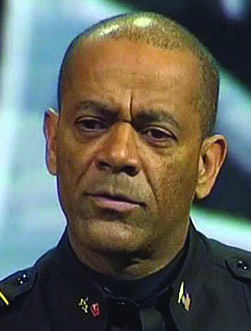 MILWAUKEE, WI
On the surface it looks like Milwaukee County Sheriff David Clarke may accept a position in the Department of Homeland Security since he recently resigned from his post.

But that is unlikely, according to recent news reports and social media feedback. Clarke, 61, may not land a Senate-confirmed job for several reasons. First many lawmakers from both sides of the aisle will probably oppose his confirmation. Second, he has been criticized for his harsh treatment of inmates including one who died of dehydration because jail guards turned off the water to his cell. Third, his decision to retire comes just weeks after a grand jury recommended criminal charges against several staff members at his jail. Fourth, Clarke is suspected of plagiarizing his 2013 master’s thesis.

According to news reports, Clarke announced his retirement shortly after he released his resignation letter to local media. In plain terms, this means the 15-year, four-term sheriff resigned. Moments later, he announced his retirement more than a year before his fourth term as sheriff is scheduled to expire. In other words, he submitted both letters while fresh criminal charges are pending against several employees in the jail he headed and while he is mulling over his reelection prospects.

A White House spokesperson said of Clarke’s resignation in a recent text to Politico, “We have no announcement at this time. Will talk about future plans next week.”

Earlier this year, Clarke was considered for a post with DHS. And he even announced plans to join the administration in May but he never landed the DHS job.

A well-known figure in conservative circles, Clarke said of his resignation in a recent statement, “After almost forty years serving the great people of Milwaukee County, I have chosen to retire to pursue other opportunities. I will have news about my next steps in the very near future.”

The sheriff who wears a cowboy hat on Fox News and frequently criticized President Barack Obama during his tenure, as well as the Black Lives Matter movement, attracted a steady stream of comments on social media including one from the Milwaukee Journal Sentinel. The newspaper said the governor had the chance to appoint a respected sheriff. “Clarke. . . lost that with his bullying ways and intemperate language in recent years. . .His departure will be good for the county.”

In addition, Clarke’s resignation has launched many negative posts on social media including one from Wisconsin State Senator Leana C. Taylor who said in a recent press release, “I want to thank Sheriff Clarke for his decision to step down. After years of abuse at his hands, the people of Wisconsin can sleep soundly tonight.”