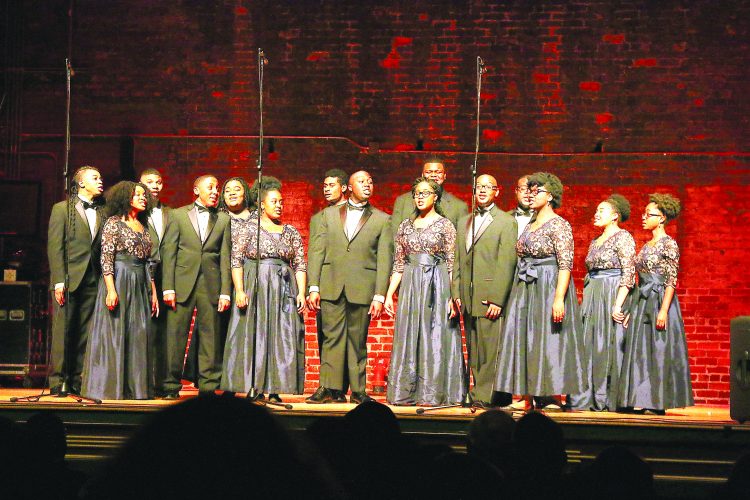 The Virginia Arts Festival presented the renown Fisk Jubilee Singers at the Historic Attucks Theatre located in downtown Norfolk. This outstanding singing ensemble adorned the stage of the famed Attucks Theatre which was designed, built and operated by African-Americans and opened in 1919. It was known as “The Apollo of the South” because many of the known African-American entertainers performed on this stage. In 1977, the Attucks Theatre was officially designated a National Historic Landmark by the United States Congress.

Under the direction of George White, on October 6, 1871, a nine member musical ensemble which included singers and a pianist left Nashville, Tennessee and began their historic tours of the United States (performing at the White House) and abroad. Their mission was to raise funds to help preserve and sustain their institution of higher education – FISK UNIVERSITY.
Because of the belief of these nine students, in their mission, to fundraise to help sustain the University, the students left Fisk to continue these endeavors. President Walter J. Leonard, during his tenure, awarded posthumously each one of the nine an honorary degree from Fisk.

In an effort to encourage the group and give them hope after they witnessed devastation caused by the Chicago fire, director White named the performers “THE JUBILEE SINGER” which referenced the year of Jubilee in the Book of Leviticus/Chapter 25. Since the group began touring on October 6 and had been named The Jubilee Singers, OCTOBER 6 is CELEBRATED EACH YEAR as “JUBILEE DAY” by the Fisk University Family.

As other outstanding performers before them, The Fisk University Jubilee Singers took center stage at the Attucks. After a brief introduction and an announcement about a few changes in the program, the Musical Director, Dr. Paul T. Kwami a former Jubilee Singer (’85), left these extremely disciplined and talented young people to perform. Their pitch, quality and tone was magnificent.

The harmony of this a cappella ensemble was unbelievable. Their repertoire consisted, as in the beginning, mainly of traditional spirituals. The songs that the Jubilee Singers sang were arranged by outstanding musicians such as John W. Work, III, Moses Hogan, William Dawson and others.

They sang, to the delight of the audience, spirituals that included Done Made My Vow, Steal Away to Jesus, God’s Gifted Hands, and There is a Balm in Gilead. The audience became involved, by clapping, when the singer sang Old Time Religion. During Intermission, Dr. Kwami asked other Fisk Alumni to stand and be recognized and paid special recognition to an alum who is 93 years old.

“The Band of Angels,” a phrase coined by the first director George White, returned to the stage and continued to sing and use their voices, in song, as White said, “as prayers, a conversation between them and God.” They began with I Thank You Jesus. Other great spirituals sung by these wonderfully talented young people were I know I’ve Been Changed, Listen to the Lambs and Our Father.

Two nontraditional songs, still performed in that quiet melodious voice, were Mr. Banjo and, Tshotsholoza an African song sung by the men. This tremendous concert, which left many in the audience wanting more, ended with the Jubilee Singers singing the FISK UNIVERSITY ALMA MATER – THE MAJESTIC DEAR OLD GOLD and BLUE!!

A free Financial Forum was held at the Indian River Library Branch (Chesapeake) by the Chesapeake-Virginia Beach Alumnae Chapter of Delta Sigma Theta Sorority, Inc. and First Genesis of Virginia.

The President and CEO of First Genesis, Kenneth J. Royster, presented information on insurances and student loans to the audience. The philosophy of First Genesis, which has never changed throughout the history of the organization, is to “help individuals and with planning for financial freedom and pursuing their financial future.”

The attendees received in depth information about the “intricacies of life insurance and the value of maintaining policies.” Royster also informed those present about the variety or different types of insurances including long term care and short-term disability insurance.

For those looking toward finding money for college, Kenneth Royster explained the many options provided through various student loans. Members of the audience left the workshop with a wealth of knowledge about how to plan for future financial endeavors.

For information on other events sponsored by the Chesapeake-Virginia Beach Alumnae Chapter of Delta. Check/visit www.chesvbdst.com.