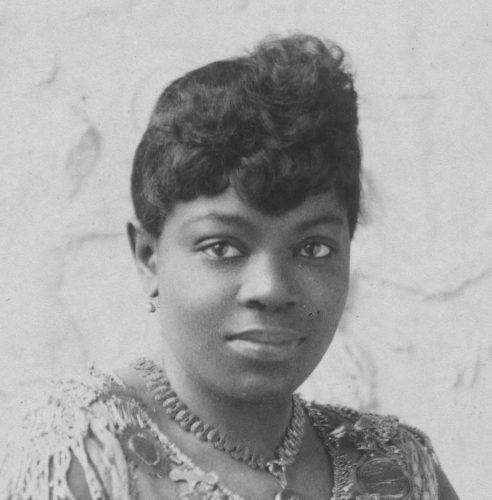 Sissieretta (Joyner) Jones was born in Portsmouth, Virginia in 1868, but, after she retired from stage, she lived the rest of her life in Providence, Rhode Island until she died in 1933.

Before she was laid to rest next to her mother, Sissieretta dazzled audiences in the late nineteenth and early twentieth centuries with her beautiful soprano voice.

Maureen Lee, who lives in Providence, wrote Jones’s bio: “Sissieretta Jones: “The Greatest Singer of Her Race,” 1868-1933, (2012, the University of South Carolina Press). Lee said Jones was described as a remarkable vocalist. During her career, the media dubbed her the “Black Patti,” (a comparison to opera diva Adelina Patti).

Lee, who was born in Providence, retired from Clemson University 15 years ago. She discovered Jones at an exhibit displaying the legacy of unknown Providence residents, called Rhode Island Treasurers and little known facts related to city history.

“The fact no one really knew about her really intrigued me,” said Lee, “The little I did read … she achieved so much at a time when people did not expect Black people to be recognized for their contributions to the arts. She was a pioneer who pave the way for Leontyne Price and Marian Anderson.”

A striking National Archives picture of Jones, wearing all of the medals she received during her career, also struck Lee’s fancy.

Lee, who currently lives in Columbia, South Carolina, has spent time In Portsmouth talking to locals about the famous resident.

Now, according to Mae Breckenridge-Haywood of the African-American Historical Society of Portsmouth, Lee is soliciting local support to help erect a protected headstone forJones’ unmarked grave in Providence.

“Sissieretta left Portsmouth when she was six-years-old,” said Breckenridge-Haywood.

“And although she moved to Rhode Island, she still has connection, family here in Portsmouth. I am hoping that everyone who respects her legacy and this city’s history will make some form of contribution.”

Sissieretta Jones overcame substantial obstacles of racial bias to build a successful and lucrative 28-year career performing in hundreds of opera houses and theaters throughout North America and Europe.

As a concert singer, she performed ballads, operatic pieces and classic art songs. In 1896 she continued singing these selections as star of an all-Black troupe, the Black Patti Troubadours (1896-1908), and later the Black Patti Musical Comedy Company (1909-1914).

But when she died 85 years ago, Jones was destitute. A longtime friend and benefactor, William P. H. Freeman, had helped her financially over the years.

After her death, Freeman, a realtor and past president of the local NAACP chapter, saw to it that Sissieretta was not buried in a pauper’s grave, but instead placed next to her mother, Henrietta Crenshaw, at the Grace Church Cemetery in Providence.

Her remains lie in an unmarked grave in this historic cemetery. Lee launched the fundraising effort to raise $6,250 to erect a protected headstone for Jones’ unmarked grave. Right now, thanks to donations via a GoFundMe account, she said she has raised $1,065.

Her goal to raise the money by May 5, 2018 so the headstone can be unveiled at a public ceremony as the final event of a four-day celebration in Providence, June 7-10, 2018, to commemorate the 150th anniversary of Sissieretta Jones’ birth.

For more information or to donate, go to https://www.gofundme.com/HonorSissieretta. The fundraisers ask that you share news about this campaign on social media sites. Also you can read a review of Lee’s book at www.sissierettajones.com.