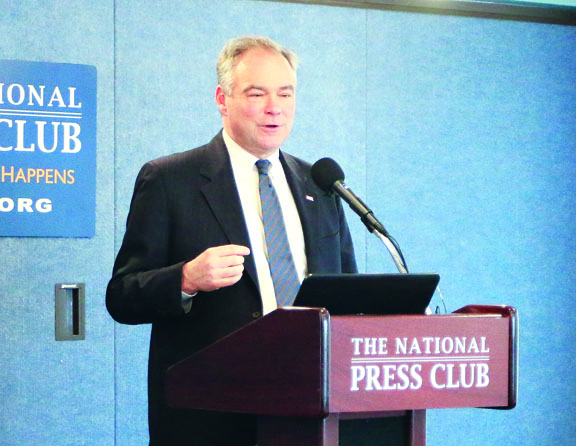 WASHINGTON, D.C.
Virginia U.S. Senator Tim Kaine highlighted a luncheon at the National Press Club on March 10 attended by member publishers of the National Association of Hispanic Publications (NAHP) and the National Newspaper Publishers Association (NNPA).
Kaine spoke candidly on lingering racism, the value of immigration and diversity, and he tackled the fear surrounding the browning of America that is contributing to backlash from the election of President Barack Obama.

“So to the fear that so many are feeling out there, about “I was in the majority, now I may not be,” I offer this counter: let me tell you about a state [Virginia] where the majority was clear and had everything and the state wasn’t doing well, and moving to a position where now there’s huge diversity in our state and we are doing well.
“That’s our story, and frankly, when we’re at our best as Americans, it’s our story as Americans. Certainly this reinvigoration and transfusion of the bloodstream by successive waves of immigration that bring new ideas and new energy is part of the reason why we can always kind of reinvent ourselves and reach a new plateau.”

The newspaper publishers represented the nation’s Hispanic and Black-owned publications, and were in the nation’s capital for business related to their individual associations. At the same time, they came together to forge a coalition to garner more advertising, especially from the federal government, for their member papers.
The NNPA represents 205 African-American-owned community newspapers nationally, and NAHP, also a non-partisan trade advocacy organization, represents America’s largest Spanish language publications. Both have a combined reach of 43 million readers each week across the United States.