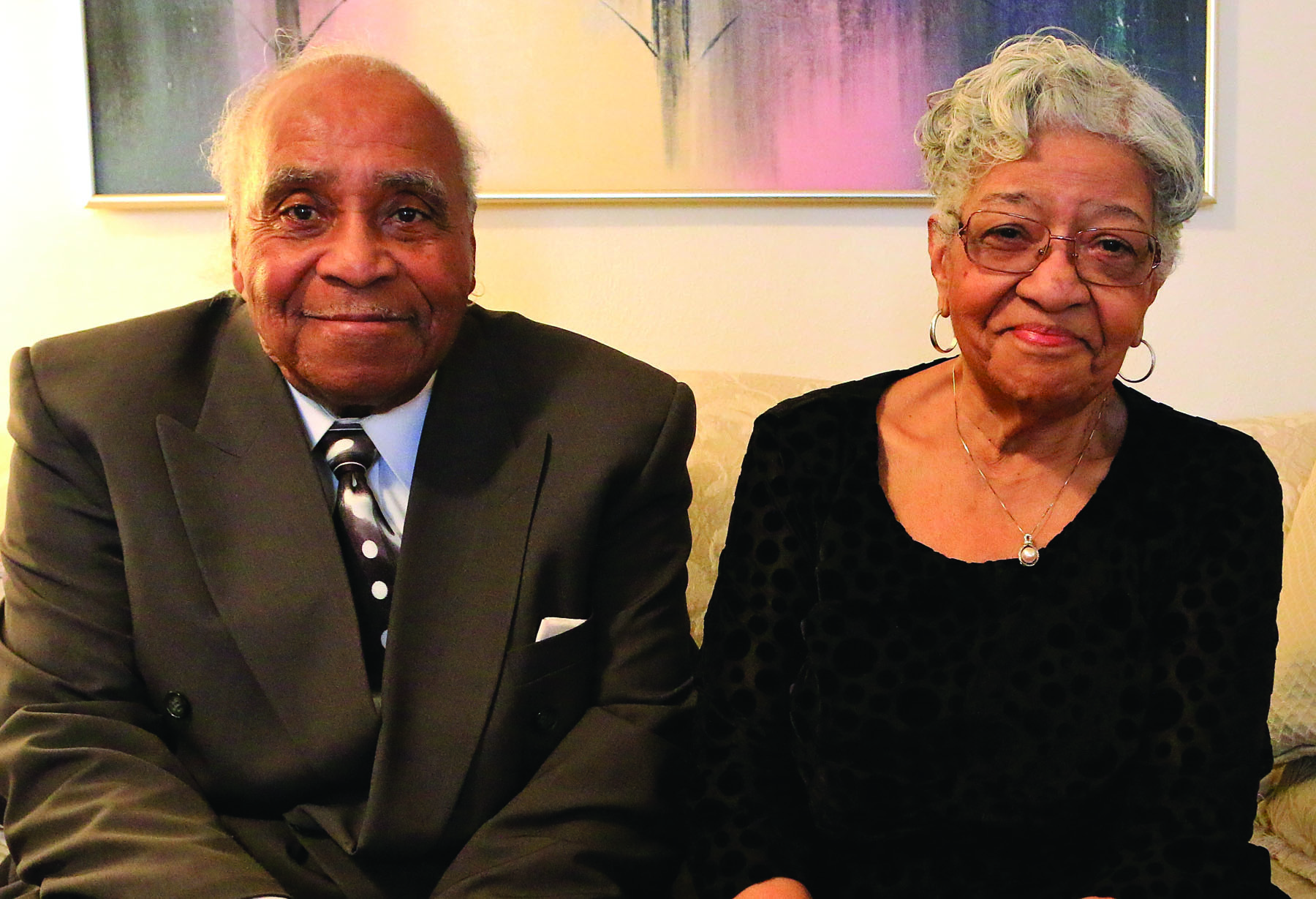 For the past two decades African-Americans have had control of the Portsmouth City Council and other important city boards and commissions. This expansion of Black political power has taken place as Whites have left the city.

The city has an African-American Mayor and Black majority on council, school board and other important panels.
This has translated into Blacks being named heads of the Fire and Police Departments and other important positions. Instead of allowing the city to succumb to a slow death, Black political and civic leaders have worked to keep moving toward viability.

A Black electoral majority and a strong civic, church and community cohesion and activism are key to such gains, in the region’s largest Black majority positions.
But such fortunes have not always existed, according to Mrs. Helen Davis and Mr. Vernon Crump, who were long time activists as leaders of the now defunct, Central Civic Forum (CCF).

The organization was made up of representatives from each of the civic leagues in the Black community and church and civic leaders.
During its heyday, it was seen as the best example of Black political and civic unity and activism for change, because it helped organize the community to desegregate the city’s public facilities and boost racial and gender inclusion in the city’s government apparatus.
Both Davis and Crump admit that the success of the CCF during the 50s, 60s and 70s may have put them out of a job.

The Forum had helped to overcome many of the fiercest barriers laid before them by Jim Crow racism.
But challenges still exist they say, even in 2016, with a Black U.S. President, fewer laws barring Blacks from voting, and greater educational and economic options.

According to Crump, the CCF was given birth in the late 1940s when the Young Men’s League which was formed by Rev. Harvey Johnson, Sr., the senior pastor of Ebenezer A.M.E. Church and the trained architect who designed the Attucks Theater in Norfolk.
Many of the young men were fresh from serving in WWII. Many had experienced the duty of fighting fascism overseas and some social freedom in Europe. But they returned home, ironically, to Jim Crow.

“When the Forum started in the mid-1950s, we were still trying to get on council, get voting rights and adequate services from the city,” said Crump, who worked in the Naval Ship Yard and Supply Center. “The government jobs we had were mostly labor-oriented. But Black people were able to secure a middle class income, educate their children and contribute to the city. But were still treated like second class citizens. We wanted change.”
Crump and his wife were enterprising, owning a strip mall which had a barbershop and his wife’s beauty parlor, among other businesses catering to Blacks.

The civic leagues of Brighton, Mt. Herman and the then new Cavalier Manor were some of the most organized Black communities in the city and were filled with middle income Blacks who agreed with Crump’s sentiment.
Crump became President of the CCF in 1957.

“There were representatives from each of the Black civic leagues and they brought their issues to the table to share with everyone,” said Crump. “Not only were we concerned about city services, but we knew we had to educate our people about political action, organizing and using our vote. But we had obstacles. Whites wanted to hold onto controlling the city government and everything else.”

According to Davis, her primary role in the CCF was secretary. She attended most of the meetings and knew what “was going on.”
“It was hard to get women, especially, involved in civic affairs,” she said. “They were afraid, not interested or too busy with family. But eventually women got involved and we played very important roles running and organizing the forum. There was some reservations, but most of the men welcomed us.”
Davis said among her other duties, she kept a book with all of the names of Blacks in the city who were registered to vote
“This was before the Voting Rights Act (VRA) was passed,” said Davis. “So we were still dealing with the $3.00 poll tax and other barriers which kept Black people from voting and having a voice on council.”

Another barrier, Davis recalled, was the White voter registrar’s demand that a Black person, applying to vote, must fill out personal information on a blank sheet of paper.
“They had to write down their name, address, city, and other personal information in order and correctly,” she recalled. “If they made one mistake, the registrar would tear it up right in the face.

“The forum selected me to hold classes to teach people how to fill out that blank sheet,” she recalled.
“So the Black voter rolls increased. We also had White candidates who came to ask for our vote. Some of them would follow through on their promise to look after our issues. Others got our vote and did not.”
Davis recalled when I.C. Norcom students held sit-ins at Woolsworth and other downtown stores in 1961. When they resisted segregation, the principal threatened to expel them.

“We did not want the kids expelled. We wanted the pressure of protest to continue,” said Davis. “So the adults from the forum would stage the protests while the kids were in school. When school let out, the kids came down and continued their work.”
Nancy Wheeler, who owned a funeral home and helped bankroll many of the CCF’s efforts, helped organize this effort.

Both Holley and Overton filed suits seeking desegregation of the city public facilities, such as the library where they succeeded, and the Bide a Wee Golf Course which did not occur until the 1990s.
Both Crump and Davis recalled that Owens and others ran unsuccessfully for mayor, city council, or the House of Delegates but the shortage of Black voters and disposal of ballots cast by Blacks posed a problem.

“I recall an election in the mid 1960s when Hugo Owens was running for council and James Overton was running for the House of Delegates,” she recalled.
“Overton lost his bid. We had to have poll watchers at each of the precincts to make sure they did not destroy ballots cast by Black people. Well, on this occasion, one of our poll watchers left his post before the precinct closed and the votes could be counted. We know they destroyed ballots because Owens lost by eight votes.”

By the next election the CCF, the NAACP and other groups involved in the Black community’s coalition of political activity, had the Voting Rights Act and an energized Black community powering their effort in 1968.
“We were educating and registering a lot of people,” said Davis. “Organization, educating the voter, and planning were key. So was secrecy, because we were aware that we had spies going back to Whites telling what we were doing so they could counter our moves.”

“We also had three candidates running, James Holley, Raymond “Big Boy” Turner, and Solomon Carey, and we were afraid Blacks would split the vote and we would not get on the council. It was my job to go talk to (the candidates) and convince one to drop out, but they refused.”
According to Crump and Davis, Holley and Turner won. For the first time since Reconstruction, Blacks sat on the Portsmouth City Council.
“That’s when we started seeing a change,” said Crump. “Holley and Turner began to get Blacks on important boards and commissions. We also had somebody on council to handle other issues relative to city services.”

Davis said the CCF was so effective in subsequent elections, that some of its members were invited to conduct workshops for Black political groups in other cities.
“Everybody wanted to know our secret… what we did to get Black people involved and united,” said Davis, who was born in Pennsylvania. “Portsmouth was different from other cities in Tidewater because we knew how to organize and get things done. We also chose leaders like Holley and Overton who were shrewd and knew how to negotiate from strength, not giving in all the time.”

Now the CCF’s work is being carried out by the Martin Luther King Steering Committee which has been in vocal support of the leaders of the city government, such as Mayor Kenneth Wright, now that Blacks have control of the levers of power of city government.
Two years ago Davis, Crump and the late Harvey Johnson, Jr. tried to revive the CCF, but there was little interest.

“We owe a lot to the Central Civic Forum and its work,” said Costella Williams, a leader in the MLK Steering Committee. “We are still supporting leaders, educating people on the issues and standing firm for our community on local issues. Times have changed but struggle has not. So we have to work and have our voice heard.”

“After 1968 and until we got the majority on council, we had to work hard against people who did not want to make the transition or see change,” said Crump. “Back then it was the city council working to keep the status quo. Today it’s the Tea Party and other groups who resist the change. We just have to remain organized and unified.”