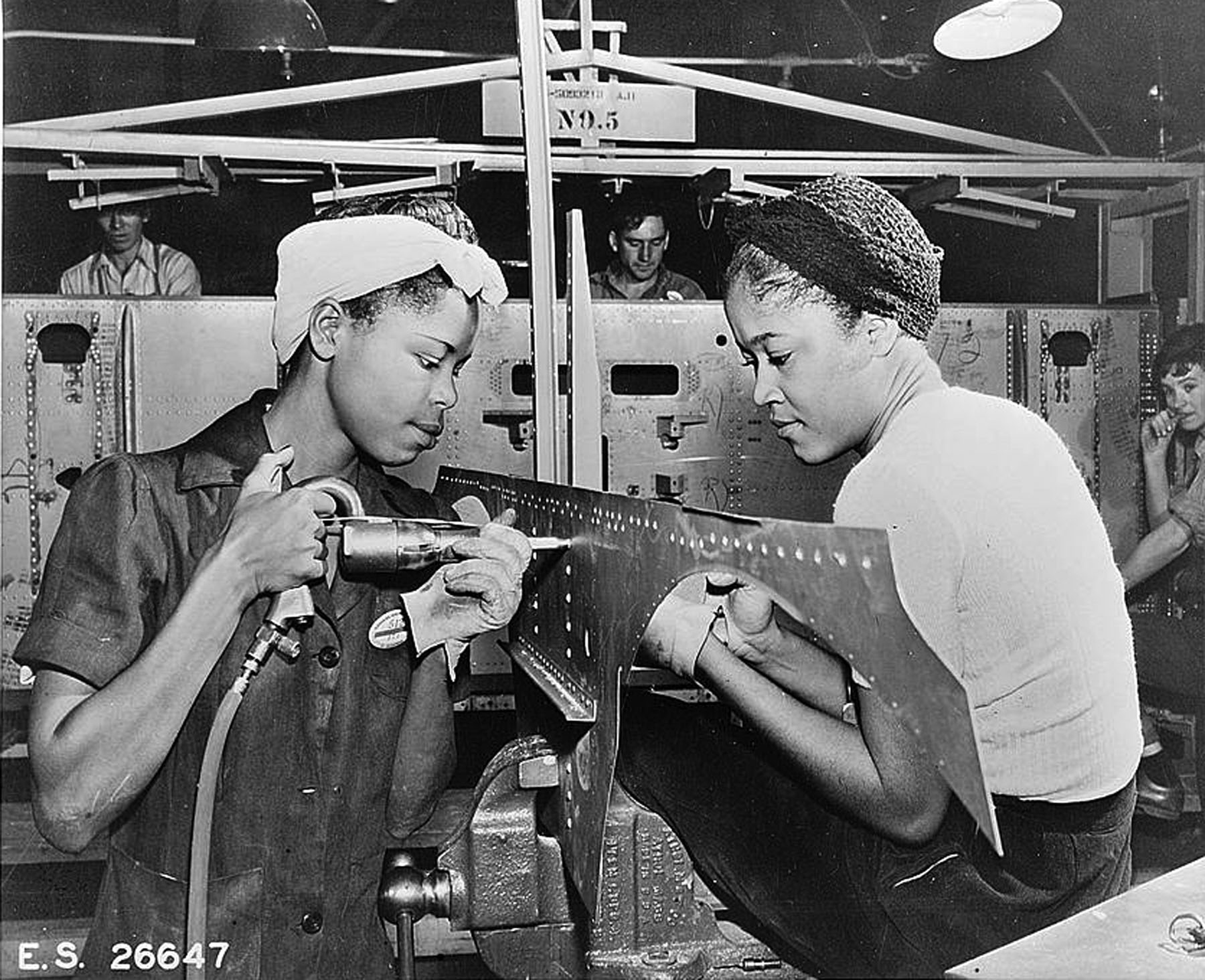 More than 16 million men fought to contain and dismantle the German, Japanese and Italian war machines during World War II, to save the world from being dominated by fascism.

But while millions of men were “over there” fighting in North Africa, Europe and the South Pacific, women were at home working in jobs men had to abandon, to produce the weapons and other materials the fighting men needed to achieve their mission.
During World War II, more than 600,000 African-American women left their jobs as domestics and sharecroppers to work in factories, shipyards and munitions plants – helping to build America’s “arsenal of democracy.”

Thousands more seized the newfound opportunities brought on by the war to work as clerks and typists in government offices, mostly in Washington, D.C. Black women were part of a 20 million female workforce force known as “Rosie, the Riveters.”

A Drexel University Professor, Gregory S. Cooke, is working on a documentary entitled “Invisible Warriors” to help “fill in the gaps” in American history as regards Black women workers during WWII. Wartime recruitment posters and media have featured images exclusively of White women workers,completely ignoring the existence of African-American “Rosies.”

Cooke’s late mother, Ethel “Becky” Cooke, is part of his inspiration for telling the story of Black women workers during WWII. During the war, his mother rode on her suitcase from Norfolk, Virginia to Washington, D.C. to get her first job as a clerk typist in the U.S. Patent Office; most of the clerical positions were held by White males prior to the war.

Philadelphia resident, Ruth Wilson, 93, was a “Rosie” who initially worked in the laundry service at the Philadelphia Navy Yard after quitting her job as a domestic for a White family.

“They wanted us to work constantly … even during our lunch break, so I told them I was leaving,” she recalled. Wilson considered returning to domestic work or exploring a career as a beautician, which she did pursue after the war. But leaving her wartime job never happened.
“They offered me the opportunity to go to school to be trained as a sheet metal worker,” she said. Wilson seized the opportunity and entered a Defense Training School at Bok Technical High School in Philadelphia.

During her six-week training, Wilson was taught how to cut, fit and install sheet metal that was used on the bulkheads and walls of ships.
After completing her training, Wilson returned to the Navy Yard and helped build the aircraft carrier, USS Valley Forge. At 5’3” and weighing 127 pounds, her size worked to her advantage.

“We were down in the hole every day, and I was small enough to work in areas where men couldn’t.”
The experience changed her life. “The money was better than working in the laundry,” she recalled. “It was exciting and I did something I never thought I would be doing as a woman.”

Wilson is a member of an ever-dwindling sorority of sisters who share her wartime experiences in Cooke’s forthcoming landmark documentary “Invisible Warriors: African-American Women in World War II.”

Many Rosies did not talk about their pioneering experiences, and in many instances their family members had no knowledge of their wartime exploits, according to Cooke. Prior to filming “Invisible Warriors,” “most of the Black Rosies had to be convinced that their wartime jobs were historically significant.”

“Invisible Warriors” also features other wartime activities of African-American women. There were thousands of Black women who ran sorority-sponsored day care centers, conducted war bond drives and managed segregated United Service Organization (USO) canteens that entertained Black servicemen.
“Black women demonstrated a level of patriotism and commitment on the home front that was unparalleled because they rallied to America’s defense, all while fighting against deeply entrenched gender discrimination, sexual harassment, racism and Jim Crow,” according to Cooke.

“Lena Horne, the most visible Hollywood actress of the time and a pin-up girl for Black GIs, confronted racism head-on. In 1943 at Fort Reilly, Kansas, Horne refused to perform because African-American soldiers were forced to sit behind German POWs.
Horne was removed from the USO Tour by MGM, her studio, but continued to travel around America entertaining Black troops – all at her own expense. Horne was a darling of the Tuskegee Airmen, and after the war, they made her an “honorary airman.”

In addition to the documentary, Cooke has launched an online petition drive to get President Obama to honor the 600,000 African-American women at a White House ceremony; more than 39,000 people from around the world have signed on. You can lend your support at: www.thepetitionsite.com/takeaction/734/744/127/

Cooke is the Producer and Director and has been working on “Invisible Warriors” for more than six years. Progress has been slowed because of a lack of funding and finding the “right people with the right intentions” to work on the project.

Cooke said that help has arrived from Reverend W. Lynette Taylor of Mother Bethel A.M.E. Church,
Philadelphia, who is now the project management strategist for “Invisible Warriors.” Rev. Taylor has been instrumental in creating a team with extensive experience in website design.