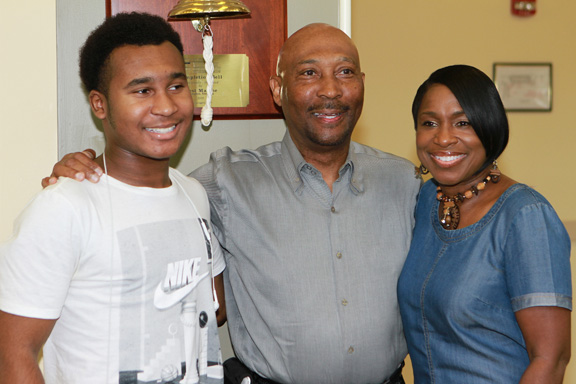 One of the most well-known people in Hampton Roads is Kelvin Oliver, who is often see at major or minor events capturing the event via still photography or video. But recently Oliver has taken on another role as missionary not to recruit souls to the church, but talking to African-American men, especially, to schedule annual preventative check ups which could detect prostate cancer and other life threatening diseases.

Just recently, Oliver was honored as the 1600th patient to undergo Proton-Cancer Therapy and add his name to the list of Prostate Cancer Survivors. According to Oliver, 61, doctors discovered the deadly cancer early and his treatment has provided him with a new lease on life and triggered his missionary work to help others. Apart from the treatment at Hampton University’s Proton Therapy Institute (HUPTI), Oliver said a support system led by his wife, Tammy, and friends, his faith, calming sense of humor and positive outlook helped him confront and fight a disease which kills thousands of Black men each year.

Oliver’s path to the role of cancer survivor and missionary advocate started in July of 2015, when he was undergoing his annual physical health screening. He was told that the prostate-specific antigen (PSA) level in his blood was high. A normal PSA, which detects the level of cancer causing agents in the blood is 3.0 and below. A 4.0 raises a red flag in the screening process. Oliver’s was 6.4.

So his physician directed him to undergo a biopsy and the hated digital (finger) exam of the rectum. Both detected signs of cancerous polyps. Another test indicated that he had a high Gleason Score, which determines the levels of cancer in the body based upon its microscopic appearance. “After all the tests, the doctor called me and Tammy in to give us the results,” Oliver recalled. He said, “Mr. Oliver, you have cancer.”

“Other than ‘your mother or father has died,’ those are the words you never want to hear,” said Oliver. “Because you think you have taken care of yourself … and it could never happen to you. Cancer? No one does. When I saw those tears in my wife’s eyes I knew it was true. We had something on our hands.” But the cancer was diagnosed early and the Olivers were told that his chances of surviving treatment would be better than if he were at another stage.

In many instances because men, especially, forgo medical checkups, the cancer is at a stage where treatment will be ineffective when they are diagnosed. Although most of the cancer was treatable and dormant, Oliver said the doctors detected a menacing “free radical” cancer body, roaming about which could have begun multiplying and raising the level of danger. But the early diagnosis would counter and deter its activity via treatment.

The next stage Oliver said was selecting the procedure to combat the enemy within his body. There was radiation and the invasive robotic surgery to remove the cancerous polyps.
Both had their side effects including nausea and weakness. “But the robotic one was the most disturbing because I was told my ability to function erotically would end,” said Oliver. “So we began researching other options.”

Their research directed them to Proton Therapy, and Oliver applied for treatment at the Hampton University Proton Therapy Institute, which opened in 2010. After the completion of various pre-screening procedures, the Institute accepted their case. “The doctors at the Institute confirmed all of the diagnosis,” said Oliver. “They said I was a perfect candidate because my cancer had been detected early.

“This is a very expensive procedure and a lot of insurance companies do not want to pay for it because it costs them so much,” said Oliver. “We applied three times with my family’s insurance plan and each time we were denied. But you know we believed when man denies you, God always provides a way.” Oliver said that on the first application attempt, the billing administrator submitted the claim using a different code and it was accepted.

Proton Therapy periods vary. Oliver’s was 44 days. He was outfitted with a special body cast to make sure the proton rays attacked each of the cancerous areas directly to insure the best results. He said he did not experience any nausea. “I had my fears, But it turned out great. I was impressed with the professionalism of the doctors…they were caring and informed me about everything they did,” said Oliver. “The staff…from the nurses to the janitors made me feel comfortable.”

“Also, we met other families who were experiencing the same fears and concerns,” he continued. “We all got to know each other and it’s like we were a family. It was like going to a family reunion.” Today, the cancerous agents have been eradicated and he receives hormones every six months to bolster his body against further invasion by the deadly cancer.
“I get hot flashes, and find myself fanning myself to say cool,” Oliver said with a chuckle. “But this has been both a frightening and rewarding experience.”

“Black men, especially, have a phobia about going and getting a check-up and getting screened for cancer and other diseases,.” said Oliver. “We spend more time taking care of our cars than taking care of our health. We fear having something inserted into our bodies. But when you die, they will be doing the same and you wont be able say a thing about it. “We are just being selfish,” he continued. “It’s not all about you. You are not only ignoring your health, you are ignoring the impact on your loved ones. “It’s not all about you. I have a loving wife, and a son. I am glad I got checked out and had this experience. I am still here for them.”