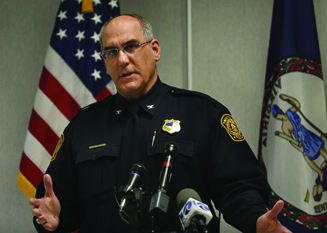 In an effort to advance policy alignment with national best practices and improve transparency, the Norfolk Police Department has updated its procedure regarding officer-involved shootings. In an email to the New Journal and Guide on Tuesday (August 9), Chief Michael Goldsmith said, “The procedural change is a result of extensive discussions by executive-level leaders within the Norfolk Police Department, local police agencies, Virginia State Police, and the Norfolk community.”

Effective immediately, all fatal officer-involved shootings will now be investigated by the Virginia State Police, according to the Chief. The Norfolk Police Department will ensure the Virginia State Police has total access to information and resources needed to complete a thorough investigation. Once the investigations are finalized, the Norfolk Commonwealth’s Attorney’s Office will conduct a legal review and recommendation.

Goldsmith also said, “As remains standard departmental procedure, any officer involved in a fatal shooting will be placed on administrative duty pending the outcome of the criminal investigation and legal review.” Once the criminal case has been finalized, according to the Chief, the Norfolk Police Department will conduct an administrative review to ensure the officer or officers involved followed proper policy and procedure.

This policy parallels the guidelines contained in the President’s Task Force on 21st Century Policing, which recommends independent investigations into officer-involved shootings. “While I have absolute confidence in my department’s ability to deliver fair and impartial investigations,” said Chief Goldsmith, “I also support the decision to advance our policies, which closely aligns the department with national best practices. As a result of these extensive discussions, we determined this is a better fit for our community.”

Since January 1, the officers in the Norfolk Police Department (NPD) have shot seven civilians; two of them have died. In each case, NPD officers have been assigned the task of investigating the activities of their colleagues in these incidents. Norfolk new mayor, Mayor Kenneth Alexander recently initiated the discussion about enlisting the services of the Virginia State Police to investigate all cases where Norfolk Police officers shoot civilians.

Mayor Alexander said last week a policy he set in place with Chief Goldsmith would be developed and streamlined and he also wanted other council members to have a say in how the new policy would be devised. Alexander said he believes that the new policy of having an outside agency investigate police shootings of civilians will create greater transparency. Also he said it will arrest concerns and distrust by the public, especially from the Black community since most of the victims of the police shootings are African Americans.

“I want to see what other council members have to add to this policy,” said Alexander. “I think it would be good if the state police investigate all of the cases. Just because they do not die shouldn’t that be investigated too? What if the incident causes a crippling injury? There is also the issue of the emotional trauma for the families.” Up to this point, investigations of police shootings of civilians have been done by homicide detectives and members of NPD internal affairs department, which is a source of concerns among city civil rights activist.

“I think it is a great idea for the mayor to pioneer this policy with the Police Chief,” said Joe Dillard, the President of the Norfolk NAACP. “I do not think this would have happened if it were not for the election of this mayor. Also it happened so quickly … within 60 days after he took office. I think this signals a policy of transparency.” Another police related issue Alexander is seeking to tackle early in his administration is related to releasing the images gathered by police body cameras of incidents involving civilians.

The one which is creating the most tension involves the Norfolk Police shooting of Willie James in early June. Police were summoned to a housing unit in the Tidewater Gardens community because James was creating a disturbance involving his family. When officers tried to talk James into leaving the house with them, they claim he lunged at them with a knife. But his family members and other witnesses told the New Journal and Guide and civic activists that the police were not telling the truth.

Dillard and other NAACP leaders were allowed to see the video from the police body cameras. But it has not been released yet because Chief Goldsmith said the incident is being investigated. Dillard said “it makes no sense for the city to spend all this money on the cameras and store the information it captures, if we cannot see the images they capture.” Alexander said that although he has called for the release of the video footage of James’ shooting, there is no policy at this point which determine how images from video cameras are to be released during an ongoing investigation. It is another issue on which he intends to gather consensus among fellow council members. “I want it released, but the delay is due to the fact that we have no policy on how it is to be done and when,” said Alexander. “We need a policy to establish criteria on how it is to be done.”