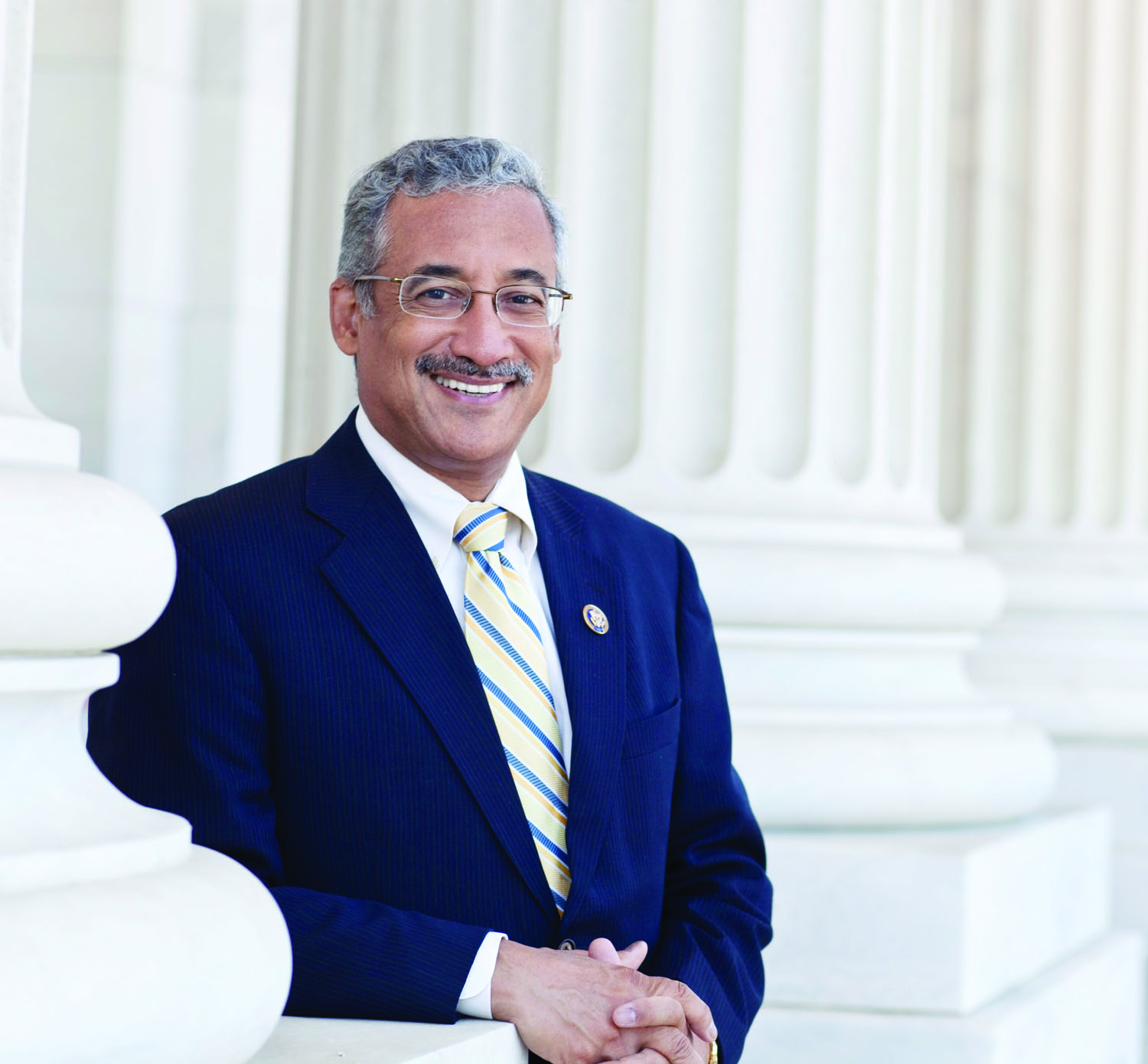 On November 8. Virginia’s Congressman Robert “Bobby” Scott may be running his last race to retain his seat in the U.S. House of Representatives. Scott is not ending his long political career where he has represented the Third District for over two decades. If Hillary Clinton should win the general election on November 8, Scott could be selected by Virginia’s Governor to replace her running mate, Senator Tim Kaine, in the U.S. Senate. Scott would make history as the first African American U.S. Senator from the Old Dominion. He made history when he became the first African-American elected to the U.S. Congress – post Reconstruction.

But the first order of business, according to Scott, is to beat Republican Marty Williams, who is challenging him again for the Third District seat in the November 8 election.
Scott has been running an intense campaign, showing up at forums and debates against Williams, defending his record and countering his opponent’s often false assertions about his work in the national legislature.

Recently during a long and free wheeling interview with the New Journal and Guide, Scott discussed a myriad of issues, including the tone of the Congressional race he is waging, police-community relations, military spending and his pending race to retain the Senate seat in Virginia for Democrats. Scott says that one of the biggest challenges he is facing during this race is reacquainting with voters he has not represented in 20 years in Chesapeake, Franklin and Isle of Wight.

All or parts of these communities were reinserted into the Third District when it was reconfigured recently due to a court challenge claiming the district was designed to pack Blacks into it to make surrounding districts safer for Republicans. Thus, challengers said this was depriving Blacks of their right to select candidates of their choice. Now the Third Congressional District has a lower number of Blacks, but party strategists believe there are enough Democratic leaning-Whites, Independents and Black voters to assure him of victory.

Scott has been making his rounds at various events through the region, talking to voters about issues and building support for his candidacy. During recent debates, Scott said Williams was off the mark when he said Scott has a weak record on military and veterans affairs. “Remember (former Virginia Senator) Jim Webb’s G.I. Bill … who introduced it in the House of Representatives?,” said Scott, about his legislative record.

Scott knocked down Williams’ claim that he did nothing on judicial reform. Scott introduced a bill of his own in the U.S. House to eliminate mandatory minimum sentencing for federal drugs charges, at the same time one was introduced in the Senate. That bill was passed and President Obama signed it. “He (Williams) does not know my record,” said Scott. “I was the lead of the 435 members in the House on that issue.” Scott said that the mandatory minimums for low level and nonviolent drug offenders is the main “culprit” for the high level of incarceration in this nation, especially of Black and Hispanic men.

He is a strong supporter of President Obama’s commutation of thousands of individuals currently serving long periods of time for non-violent drugs offenses, many of whom received sentences equal to one imposed on murderers. He used the case of Kemba Smith, who had been an undergraduate at Hampton University when she became caught up in her boyfriend’s drug ring. Though the judge said she had no meaningful role in the operation, she was sentenced to 24 and half years.

President Bill Clinton granted her clemency after she had served six years of the sentence. During that time she gave birth to her son. Congressman Scott currently serves as the ranking member on the Committee on Education and the Workforce, a committee he has served on since his arrival to Congress in 1993. In his capacity as the most senior Democrat on that House Committee, he is leading the fight for access to quality early, secondary and higher education for all of America’s children with an emphasis on solving the growing problem of student debt, closing the achievement gap and dismantling the School-to-Prison Pipeline. In 2015, he was one of the four primary negotiators of the Every Student Succeeds Act, which reauthorized the Elementary and Secondary Education Act for the first time in 13 years replacing the No Child Left Behind Act.

Additionally, he is focused on ensuring that millions of Americans have the opportunity to go to work every day and know that they will be treated fairly, paid a decent and living wage, given a safe environment in which do their jobs and provided access to affordable health care. From the beginning of his tenure in Congress, Congressman Scott has led efforts to pass comprehensive juvenile justice reform and crime prevention legislation. Towards that end, he introduced the Youth PROMISE Act, which would provide resources to state and local governments for evidence-based strategies and programs to prevent juvenile crime. And, as a part of his effort to provide universal health care for all, prior to the passage of the Affordable Care Act, Congressman Scott sponsored the All Healthy Children Act which sought to ensure that millions of uninsured children in the United States have access to a comprehensive set of health care services.

On the tensions between police and residents of African-American communities Scott said that improved training of officers and reduction in racial profiling should be emphasized by local police departments. Scott said “democracy” and the residents’ use of the election system could be used to arrest such tensions as well. Scott said that before Michael Brown was shot and killed by a White police officer in 2014 in Ferguson, Missouri, most of that small city’s council was White and so was the police chief and prosecutor. Ferguson is a majority Black community.

That changed after the unrest, when calls for reforms in that city, driven by local and national protest, fostered the creation of the Black Lives Matter (BLM) movement. Now, Scott pointed out, those protests and reforms attributed to the ouster of the mayor, police chief and White prosecutors who held office before Brown’s death. “One reason why we have not had mass explosions in this area is because democracy is working,” Scott said. “Have you noticed that in Hampton, Newport News, Norfolk, and Portsmouth, the Commonwealth’s Attorneys are Black.”

Scott said that not only are these officials willing to work to use the judicial system to make police who shoot unarmed Black residents accountable for actions, there are Black judges and Black, White and female police chiefs in the region who are cooperating with that effort. Recently Terrence Cunningham, the President of the International Association of Chiefs of Police, issued an apology for the “dark periods” when police officers were used to oppress residents of poor and Black communities. Scott said it was “a step in the right direction.”

But Scott said the Police Chief of the City of Indianapolis, Indiana, equated the tensions between Blacks and police departments to an explosion caused by the mix of gas and fire. Once the explosion begins “it is too late” and good police-community relations must be established before it occurs. Although there has been a high level of support for Scott to be named to replace Senator Kaine, if he should win the Vice Presidency, there are questions about Scott’s ability to win a state-wide election and raise the more than $20 million needed to do so.

If Scott is appointed by Gov. Terry McAuliffe, he would have to run in and win a special election in 2017 to serve out the remainder of Kaine’s term. Then in 2018 he has to run a campaign to win a six-year term of his own. In 2017, Virginia’s U.S. Senate race will be the only federal race on the ballot, along with contests for Governor, Lt. Governor and Attorney General of this state.

“I have raised enough money to win by at least 38 percentage points in every race I have run ( in the Third Congressional District),” Scott said. “How much more money should I have raised? In a state wide race, I expect to raise the money. No one person can raise the kind of money needed for the first in 2017.” Scott noted that the state and national Democrats would work hard to help him raise the money to keep that seat, especially if the party comes close or wins a majority of seats in the Senate on November 8. He expects help in organizing fundraising events to keep pace with state Republicans who will be fighting to reclaim that seat. He noted that various Progressive Super PACS would possibly pour in dollars to help his party retain the seat.