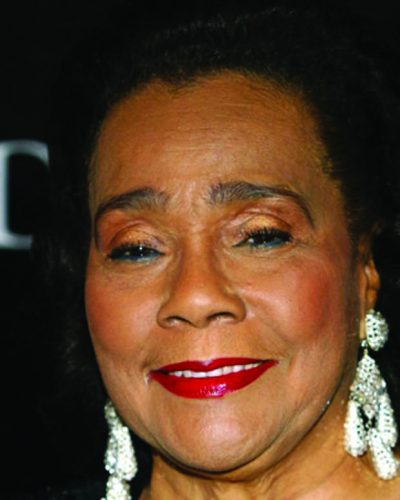 Coretta Scott King had a habit of showing the nation her scars, not her wounds.

For example, after her husband was assassinated on April 4, 1968, she left her husband’s freshly dug grave. Four days later, on April 8 she led an estimated 42,000 people on a silent march through Memphis. A few months later, on June 26, 1968 she launched The Martin Luther King, Jr. Memorial Center in Atlanta, in her basement. Clearly, Mrs. King puts a face on this year’s 2018 Women’s History Month theme, “Nevertheless, She Persisted: Honoring Women Who Fight All Forms of Discrimination Against Women.

Mrs. King was a survivor who was familiar with grief. Still she repeatedly urged others to focus on their scars, not their wounds. “Women, if the soul of the nation is to be saved, I believe that you must become its soul,” she said when she was inducted into the National Women’s Hall of Fame in 2011.

But this is the point. After her husband was murdered, Mrs. King may have accomplished more in three months than some women accomplish in a lifetime. Perhaps it is because women of her ilk can distinguish a wound from a scar. According to Web M.D., “Scars form after a wound is completely healed.”

”Just be what you are,” Mrs. King said in a trademark quote. “I try to be my best self and be what I am … satisfied with that.”

Or put it this way. Discrimination is painful and it can create a wound. But in real life, wounds naturally become scars. Specifically, new collagen from protein in the body transforms a wound into a scar. The body mends the damage, in other words. The wound becomes a scar.

Focusing on the scar, not the wound Mrs. King would spend the next 15 years of her life pushing for a holiday that would honor her husband. Specifically, Congressman John Conyers introduced the first legislation for a federal King Holiday on April 8, which was four days after her husband was assassinated.

This means for nearly two decades, from 1968 until President Ronald Reagan signed the King Holiday Bill into law Nov. 3, 1983, the single mother of four struggled to make the King Holiday a reality. She saw the first state King Holiday Bill (sponsored by then Assemblyman Harold Washington) signed into law in Illinois in 1973, according to the timeline on The King Center website. Other states followed.

How did she juggle so many complexities? Mrs. King said, “When fear rushed in I learned how to hear my heart racing but refused to allow my feelings to sway me. The resilience came from my family. It flowed through our bloodline.”

The next month, on Nov. 3, 1983 – President Ronald Reagan signed the bill that established the third Monday of every January as the Martin Luther King, Jr. National Holiday, beginning in 1986. The next year, Reagan on Aug. 27, 1984 signed legislation providing for the Martin Luther King, Jr. Federal Holiday Commission, to last for a term of five years, with an option to renew for another 5 years.

As if she is walking in her mother’s footsteps, the Rev. Dr. Bernice King has a habit of pointing to her scars, not her wounds.

You probably recall the dizzying array of scenes from her early life. One memorable photo shows her young face pressed to the window of the limousine trailing behind her father’s hearse. Another photo shows her sitting at her father’s funeral in pigtails snuggled next to her mother.

“When King was 16 and away with a church youth group, she saw a documentary about the civil rights movement,” according to Biography.com. “At a mention of her father‘s funeral, she burst into tears and fled outside. For a time she doubted her commitment to God, but at 17 she felt called to the ministry.”

Years later, while she was delivering her mother’s eulogy, the Rev. Bernice King stood in the pulpit and said of her mother, “She has touched so many lives.” Her mother died at age 78 on Jan. 30, 2006. Four presidents and countless dignitaries attended her mother’s memorial service that was held eight days later.

You can watch the eulogy she delivered at her mother’s funeral on You Tube. If you do so, watch closely. Notice her preaching style reminds you of her famous father’s.

At her mother’s funeral, she paused and said of her mother, “One thing that is so critical is that we don’t hold onto our mother as long as we held onto our daddy. Because the way we hold will prohibit and inhibit the destiny that God has inside each and every one of us.”

About a year later, she delivered the eulogy at her older sister, Yolanda King’s funeral on May 24, 2007. Yolanda was the first-born of the four King siblings and noted for her artistic and entertainment endeavors and public speaking. Her early death at age 51 was of heart failure.

She is chief executive officer of the Martin Luther King, Jr. Center for Nonviolent Social Change in Atlanta. She is the only King child who entered the ministry.

A Spelman graduate, she earned both her master’s and doctoral degrees at Emory University. She gave her first sermon at Ebenezer Baptist Church in March 1988, following in the footsteps of her father and grandfather. In 1990, she was ordained at Ebenezer. She soon was serving as a minister at the Greater Rising Star Baptist Church. She became a co-pastor at New Birth Missionary Baptist Church but left in in 2011.

In a sense, the Rev. Dr. Bernice King pointed to both her wounds and scars in a 2013 CNN interview titled, Moving Out Of The Dreamer’s Shadow. “People just don’t know me period,” the Rev. Dr. Bernice King said, in the CNN interview that was held a few days before the 50th anniversary of the March on Washington was held in August 2013. Tens of thousands of people gathered on the National Mall to commemorate the 50th anniversary of Dr. Martin Luther King Jr.‘s 1963 March on Washington

The wounds and the scars surfaced as the Rev. Dr. Bernice King continued the CNN interview. “People just don’t know me period. The first tendency is to make a judgment,” she said. “Part of that has to do with people feeling like I’m stoic, standoffish. Some people feel like I’m arrogant. It’s unfortunate because people don’t know my heart.”

She continued, “I have walls for a reason. When you grow up with the kind of tragedy we’ve grown up with, you’re cautious. I was 5 when he was assassinated. Some of the distrust and walls come up automatically. It kind of comes second nature. That probably bothers me the most.”

She was asked about her siblings demanding a licensing fee from the group that led the successful campaign to build a monument of their father on the Washington Mall. And she was subtly asked if the King children were more concerned about making money off their father’s legacy than extending it.

The Rev. Bernice King said, “Why does that matter? Why does it matter to you, whatever it is? We were deprived of our father. Had he been here, this wouldn’t be an issue. Our father gave a lot to America.’’