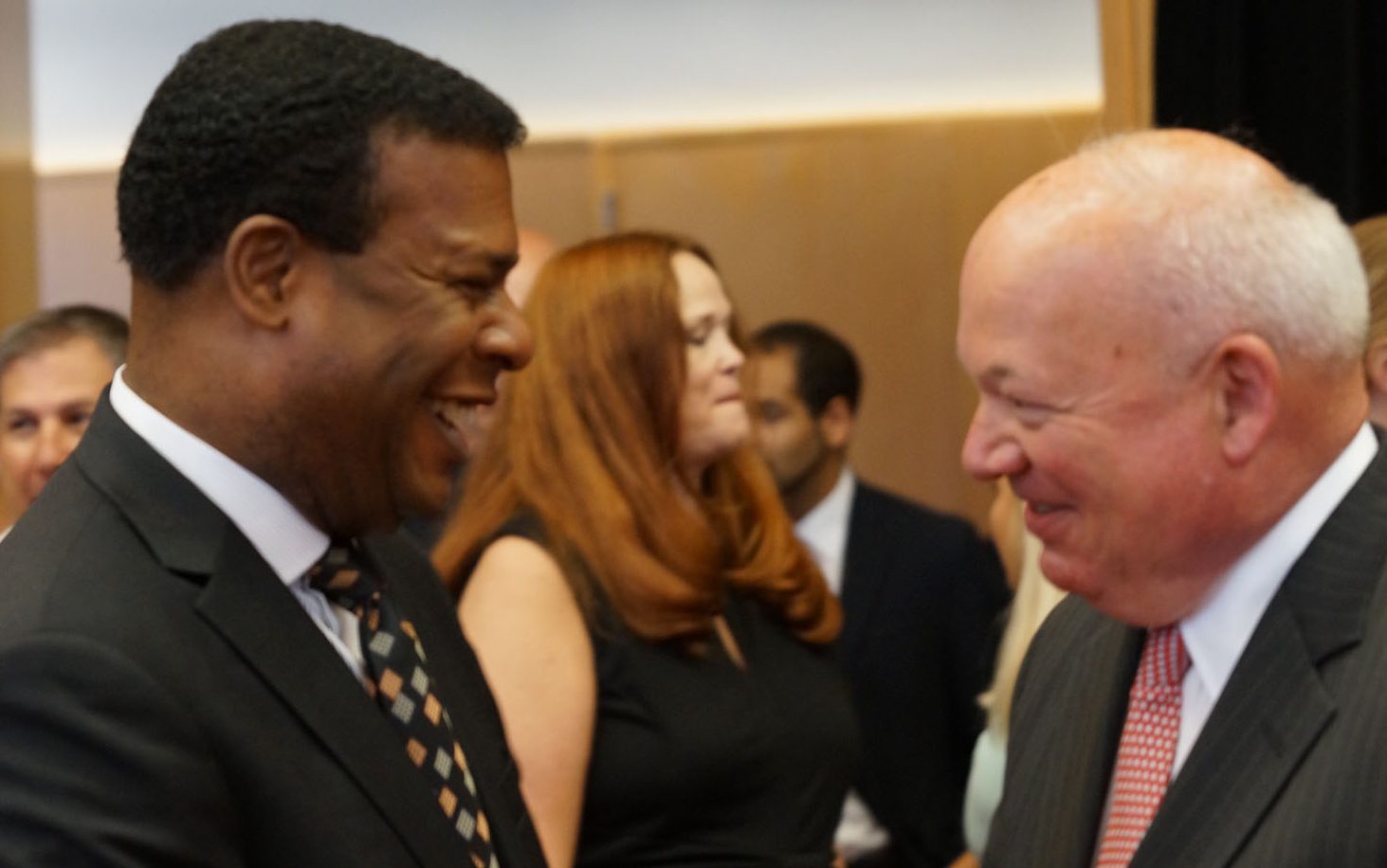 Editor’s Note: This version contains a correction over an earlier post that named James Overton as a councilman. Mr. Overton never served on Chesapeake City Council.

When Kenneth C. Alexander is sworn in on July 1 as Norfolk’s new mayor, he will join a unique and growing club of Black men and women who have risen to the most prominent political position in their community. Virginia Beach, Richmond, Norfolk, Newport News, Chesapeake and Portsmouth are six of the most populous cities in Virginia. Only the Beach has not elected an African-American as mayor. In fact, it is the only major city in Hampton Roads which has not.

Black mayors have been selected from among their colleagues on council, or in the case of Alexander in Norfolk, by popular vote of the people, a policy Norfolk adopted in 2006. To lend a semblance of political inclusion, especially in cities with large Black populations, Blacks are frequently chosen as Vice Mayor. Newport News was the first area city to elect a Black mayor, Jessie Rattley in 1986.

Many locales grant a ceremonial role to the mayor job. Though these mayoral positions are ceremonial, the office holder still has a vote, and with the title, the ability to cultivate and secure a bloc of votes on council to control the agenda and direction of policies. The daily operations of the city, such as the hiring of police and fire chiefs and developing a budget are relegated to the City Manager and staff of most cities for the council’s approval.

Thanks to L. Douglas Wilder, according to Newport News Mayor McKinley Price, Richmond alone adopted a “strong mayor’ form of government, wielding vast powers to operate and control the daily operations of the city. Recently the New Journal and Guide asked a number of individuals who are current and past mayors to extend some advice to Norfolk’s mayor elect from their experiences in navigating the political, administrative, policy and social waters he will encounter once his tenure begins. Former Chesapeake Mayor William Ward was first elected to council in 1978. Twelve years later, he was elected the city’s first Black Mayor of the majority White suburban enclave.
Ward was a History Professor at NSU, helped managed the election campaigns of the first two Blacks to sit on the council, post Reconstruction – Dr. Hugo Owens, Sr. and William Patrick Clark.

“When I was first elected to council, I was perceived as radical … and divisive; they did not know what to think of me,” said Ward. “Over a period of time they got to know who I was … a voice for those neighborhoods which had been long ignored and the city as a whole. That’s how I won their support to be mayor.” Ward said he adopted the leadership and coalition building concepts of political pioneers such as Owens and Overton in Chesapeake and Norfolk’s Joe Jordan, who worked to be an effective member of the city’s political power structure.

“They were able to establish a Black agenda without being abrasive and divisive,” said Ward. “I wanted to work for the city as a whole. But I had to remind my White colleagues that there was another community of tax-paying citizens in the Black community who also voted and expected city services, employment and respect.” Ward and other Black leaders interviewed for this story said one of the first things they did when they became mayor was reach out to business leaders and other power broker to listen to their concerns, their needs and ideas on economic development and job growth, to build support dialogue.

Considering the political sophistication of Mayor-elect Alexander, they all assumed that he has checked this off his “to do list” since his campaign was embraced by a broad range of the city’s business and civic elite. “The job (of Mayor in Chesapeake) is mostly a ceremonial one. But you can build a lot of power influence,” said Ward. “You have to work closely with the city manager and his staff who may be there long after you are gone.

“You have to study and have a working knowledge of their jobs and how they function or they could bypass you by on critical issues and decisions,” said Ward. “More importantly you must get all the facts to make a good decision and not draw conclusions, too quickly, especially. Also, you really have to be careful maintaining the confidence of the public safety people.” In 2010, Kenneth Wright became the second African-American Mayor of Portsmouth. Dr. James Holley, one of his mentors, who served two non-consecutive terms, was the first. Wright has been clashing with White members of council and city officials over the past year over the budget and working to reform city practices neutralizing what he calls a “good ole boys” network of political patronage which has concentrated power in the hands of a few powerful business leaders, many of whom have moved out of the city. He is the target of a recall effort by residents who believe they have “lost confidence in his leadership.”

But Wright said the political infighting is based on the city’s remaining White population’s and business elite’s inability adapt to a Black political majority on council that is controlling the levels of power in the area’s largest majority Black city. “Despite what they say about me, I believe in listening to the voice of the people. I know that not all of them come to the city hall,” said Wright. “So, you have to be accessible. Every Sunday I am in at least four churches, not for political reasons but to listen to people. They do not always have nice things to say about the way we run the city. They have questions and concerns and I want to hear them. I want to work to resolve any issues they have.”

Wright is quick to tout the economic development on display in downtown Portsmouth, such as a new apartments complex and other investments to bolster the city tax base. “Norfolk has twice the population and economic power that we have in Portsmouth,” said Wright. “But all of these communities have the tale of two cities.” “There is one segment of the city which is prosperous and doing well,” said Wright. “Then there are other parts of the city where development and prosperity has driven by them. They are facing the bulk of the crime, poverty and the drop out rates. He (Alexander) has to find a way to effectively address all of these issues which are keeping these communities behind. If not, these problems will impact on the city as a whole.”

Wright said that Mayor-elect Alexander should “lead the way” on promoting economic and municipal regionalism to steer these (Hampton Roads) cities need to work together on these issues,” said Wright. “I look forward to working with him and sharing ideas on issues our city and others have in common.”

Representing the Whaleyville Borough of Suffolk, Curtis R. Milteer, Sr., is currently the longest serving council member in Virginia, first elected in 1980. His colleagues selected him mayor in 2000-2002 to one term and he has also served as Vice Mayor. Suffolk elected it first post- Reconstruction era Black council member in that historic year of 1968: Moses Riddick, a civil rights activist.

Milteer, who is seeking his 10th consecutive term on council, believes “ to be effective, you have to be a team player.” “I think you have to effectively communicate with all of the members of the council and get them to working together to benefit all of the city, not just one segment,” said Milteer, who is 85-years-old. “You have to be honest and straight-forward personally and with policy, because you need to win and maintain confidence, whether you agree on a vote or not.”

Milteer led the council when Suffolk was invested in installing water, sewer and storm drainage systems to many parts of the city’s poor Black section which had long been ignored
Milteer admits that some of his strongest resistance came from African-American members of council and the community which did not always believe he was working in the best interest of the Black community. “Some people want to control your vote and disagree with you,” said Milteer “I’ve always strived to be fair. But I voted for the best interest of all people not just a certain group.”