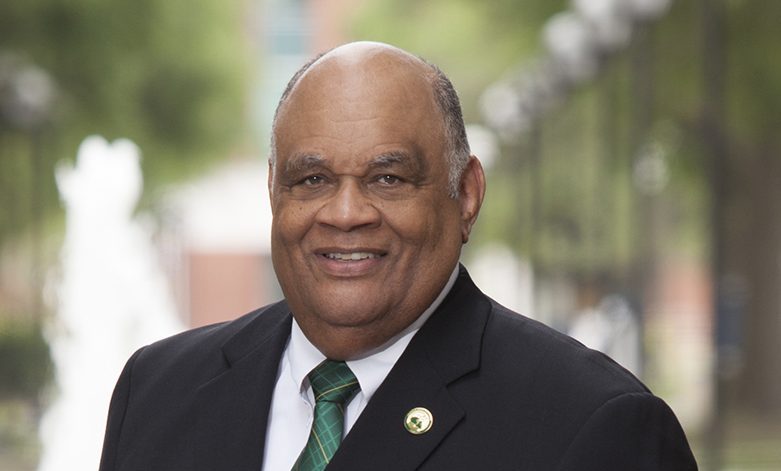 Three years after he was appointed the Interim President of the state’s largest Historically Black University, Eddie N. Moore, Jr. will be inaugurated formally as Norfolk State University’s (NSU) new leader Sept. 16 at 10 a.m. at the L. Douglas Wilder Performing Arts Center. The Investiture Ceremony will culminate a week of activities (Sept. 13-16) which will include the observance of the 81-year-old school’s Founder’s Day.

Moore will become NSU’s sixth President. Given the name “The Fixer,” for his ability to right the operational ship at Virginia State University (VSU) and his expertise in state fiscal policy, Moore arrived at a challenging time for the university. Dr. Tony Atwater, the former President, had been removed from office after a brief stint when the university Board of Visitors was unhappy with his speed in rectifying significant accounting and academic issues. NSU was given a warning by its accrediting agency soon after Moore took office.

During his upcoming address, Moore said he will highlight the challenges his administration has worked to correct, what issues the university is facing now, and what plans he and his leadership team will lay for the future. Moore said if he had to make a comparison with what he found upon his arrival at NSU, it would be similar to what he found at VSU: both are state-supported HBCUs and they have similar student demographics, accounting systems and funding guidelines.

“Some of the same problems,” he said. “It was about 80 percent the same and 20 percent different,” said Moore, who at one time was Virginia’s State Treasurer. “Our (NSU) foundation needed repair and I had to do it without destroying any of the buildings. We had to hold the building up while repairing the foundation.” Moore said implementation of reforms by all of the school’s academic departments, updating its accounting system, and competent fiscal management have put NSU on a sounder economic footing.

Such advances have attributed to NSU’s being removed from the damning list of institutions on probation by the Southern Association of Colleges and Schools Commission on Colleges (SACSCOC). “The main goal that I was brought here for was the accreditation issue,” said Moore. “The biggest achievement was the accreditation to get the school back on level ground. We were first placed on warning. I thought it was a break … less severe.

“The second year, we got probation, which I expected the first year,” he said. “I am glad we got the warning first. You are only allowed to be on probation one year. I want our readers to know … we never lost accreditation … just placed on probationn. ‘We were walking the sidelines and any bump would have knocked us out of bounds,” he continued.

Moore said another accomplishment was placing the school on a strong and viable financial footing. “I think a subset of those goals and most important is the financial stability,” said Moore. “Since the time we were on warning … we lost over $23 million in student revenue. We were still able to stabilize the institution …and keep it in good shape. “Another is starting a culture of accountability. We were not doing all the things we should have been doing, not in preparing our students … the documentation was lacking. We had to do three years of assessment.

“I would had preferred if we had a different accounting software system,” he said. “The staff has overcome that. I would say our accounting staff is as good as any in the Commonwealth. We are really in good shape.” After a period last year when the university saw a shortfall in enrollment because of the reconstitution of its Enrollment Management team, NSU is seeing improved enrollment numbers this year.

“It does appear we’re gonna have a bump this year,” Moore said, knocking on the wood table. “We are not final (on the enrollment census) yet. By all indication, we are running ahead of last year this time. I am pleasantly optimistic. Instead of a 100-student drop we were forecasting this year, we have a 200-student increase which means we are swinging to about 300 and maybe even more.”

Moore said he has noticed improved relations with the community beyond the NSU campus, especially with the civic and faith leaders. He said such pluses have an impact notably on enrollment. With the increasing cost of a college education, Moore said he wants to devise a way to reduce the percentage of the school’s operating budget that is borne by students who are already in a tight squeeze with rising loan debt.

“When I walked in the door, I felt too much of our limited resources were being charged to our students in order to funnel it through to the organization,” said Moore. “More than half of our budget … closer to 60 percent comes from our students. Every dollar I spend anywhere … students are funding 60 percent or a little more. I feel we need a balance … I need to insure for that 60 cents, in many cases, I am asking students to borrow … that we are getting an appropriate return.”

There were community concerns about the future of the Brambleton Community Outreach Center which is owned by NSU and was leased to the City of Norfolk for use by the community for meetings and other activities. Moore said the facility has its future in NSU’s immediate and future plans. The university has spent some $3 million on upgrading it for use by its students. Due to the jump in enrollment and the shortage of dormitory beds, the Brambleton Center will become the temporary home for up to 20 male students this semester. Once the students find beds on campus, Moore said the building will be given to NSU’s Kinesiotherapy Program for labs to continue its mission and retain accreditation.

Moore said NSU is doing well in mining for the recruits along the I-95 corridor toward Northern Virginia and Maryland, Pennsylvania and New York. North Carolina is another source. Out-of-state students, due to the university’s ability to charge them higher tuition fees are considered the “lifeblood” of the HBCU. Moore said Norfolk State is overcoming the negative “perceptions” caused by negative publicity which colored NSU as a failed institution. He said this was due in part to parents and the public not fully understanding the school’s status on “probation” which prompted students to select other institutions.

He said he is seeing an up-tick in transfers, and he wants to enlarge the number of ‘legacy’ students who are the offspring of NSU graduates. NSU is experiencing a building boom with its new library, nursing building, and now the rebuilding of the school’s Historic Brown Hall. Moore said although students want more housing and parking spaces, the cost of which is borne by students and not the state, the university does not want to impose that additional price tag on students at this point.

Moore said many parents are not aware of the high cost associated with going to college and may not be preparing strategically or monetarily to adequately confront it. “By and large universities which have an abundance of first time college students like NSU … are not doing a good job of preparing parents for what it really costs,” he said. “In my case I had two kids in college at the same time. From the time they were born, I did the calculation of how far I would go in the hole.”

Moore said many of the parents of students enrolling at NSU were used to free public education, with an occasional fee for activities. “Then they come to a Norfolk State … and whether they are from New York, Florida or Virginia, they expect it to cost less or be a continuation of fees for education and that’s just not the case.” He said he doubts that half of the students who will enroll at NSU will have annual family incomes of $50,000 and most rely on scholarships or federal and state financial aid packages.

Parents in this income bracket, he said, do not have a large amount of disposal income. Thus the family contribution to the cost of a college education is not there nor can it be covered by the school. He suggested more parents use the state pre-paid funding plans for their children as early as two-years-old so that by the time they are 18, they will have something.

Moore said he would like to stay on until at least 2019 when NSU will be measured again for accreditation. He said his efforts now and in the near future will assure the university is better able to meet all of the requirements and its recent failures will be behind it. “I want to ride off into the sunset down I-64 (to Suffolk where he lives) and leave a university that is stronger in all areas … more stable and recognized as a premier national institution,” said Moore. “Not just a regional one … we owe that to our students who come from out of the state and are carrying the message back. “We’ve got to take that basket off of our candle … and let our candle shine.”