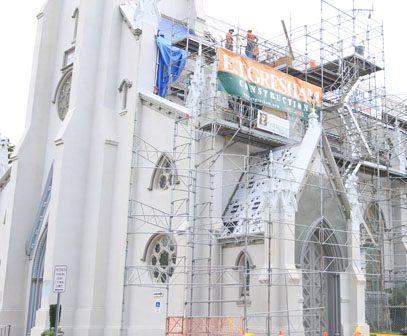 To the naked eye, it looks like the Basilica of Saint Mary of the Immaculate Conception is being restored by several construction workers – but looks can be deceiving.
During a recent tour through the 158-year old edifice, Development Director Racquel Mayner pointed to some of the improvements construction workers have made since the $3.1 million restoration project kicked off in April.

Pointing to the 43 stained-glass windows that were shipped from Munich over a century ago and installed in the edifice, Mayner said craftsmen have restored eight. Pointing to deteriorating columns on the 158-year-old Gothic style building, and rotting wood beams, Mayner said workers are painstakingly restoring the columns and beams. But she didn’t stop there.

“My husband (Jeffrey) and 4-year-old son, Jackson were baptized here on the same day, Easter 2013,” Maynard said pointing to the baptismal font installed in 1991. “It was wonderful. It was an out of body experience, seeing my husband and son being baptized together. It was a monumental moment when my husband chose to join our faith and my son as well. We made the choice for our son. My daughter, Nandi, 15, was baptized here.”

The point is this. The chaos is obvious. Less obvious to the naked eye, are the untold number of lives that are being restored in the parish located at 232 Chapel St. in downtown Norfolk. Restoration is occurring as parishioners slide into pews to celebrate Mass, sing in the choir, teach Sunday school, or serve in the soup kitchen. Renewal is occurring while construction workers strain to scrape paint, revive the stained-glass windows, and the deteriorating wood columns and beams that date back to 1858.

“The Spirit is doing a lot of the work in the church,” Maynard said. “But we still need everybody’s help. Every person can help us reach our goal.” Specifically, the only African-American basilica in the country is trying to raise about $2 million, after receiving about $1.2 million from parishioners in pledges and donations. “The $2 million shortfall is making us reach out to the community,” Maynard said. “We are offering free, scheduled tours on Tuesday, Wednesday and Thursday from 11 a.m. to noon; People can give donations. We are finding there are many who did not know about Catholicism but want to learn more about it.”

While the naked eye may linger on what’s wrong – faded carpet, washed-out paint, rotting beams, and dust bunnies – the chaos does overshadow the overwhelming sense of well-being that streams through the parish. “The church has sustained me through a lot of bad times,” said Oretha Pretlow, who has held several increasingly responsible positions in the parish since 1978 including confirmation catechism coordinator and co-coordinator of the Sunday school. “In the worst times, I could go to a meeting and feel sustained, valued, and loved.”
To Pretlow, it is not idle church talk.

“I am the oldest of eight kids, both of my parents were Catholic,” said Pretlow, 67, who has served as St. Mary’s pastoral associate since 2005. “The relationship between my father and I was a little strained. He just wasn’t present for us. It made for a lot of estrangement. By early 1976, my mother had enough. She left. She came to live with me.” Describing a clear turning point in her life, Pretlow continued, “On Sept. 1, 1976, we were having a Mary Kay party at my sister’s house in the same apartment complex where I lived. My father called and said he wanted to talk to my mother. My instincts told me not to let her go alone.”

Pretlow continued to calmly describe the day that changed her life forever. “He (my father) took out a gun and shot over my head, then turned to my mother once. I took the rest of the bullet. As I was lying on the ground, my mother asked if I was alright. I told her to take care of herself but I didn’t think I would make it. She was injured in her left side.”
After the shooting, Pretlow, who was in her 20s, not only had surgery several times, she also experienced painful flashbacks. “I spent the next three to six months recuperating,” she said. “I seemed to be alright but I would smell gun powder. I would jump whenever a car pulled up beside me.”

Pretlow continued, “After he got out of jail in a few years, he moved to New York (Queens) and lived there until 1989 when my mother died from cancer. He came down for the funeral. I picked him up at the airport. He said to me, ‘We never talked.’ From that point on, we began to talk. One day I told him I forgive you … The day he died (1996), I had just dropped by the house. He was in the bed.”

And this is where St. Mary’s comes in. Straining to repair her life as a young adult, Pretlow returned to the parish and began to teach a Sunday school class. A sense of well-being surfaced. “I had been in church all of my life; but I did it because I was raised that way. You go to church – you know. After the shooting, I felt shame and confusion for a long time. But I walked into the room and began to teach a Sunday school class, although I was nervous and unsure of myself and did not have confidence.”

“Soon a sense of well-being surfaced. “The minute I walked into the classroom and began to teach I realized there was more to me than I knew,” Pretlow said, laughing softly. “To sum it up, I would say I surrendered. ‘Who am I to question why,” I thought. While I used to ask God why did you let me live? I remember He would always say to me, ‘Not yet.’“ Did St. Mary’s restore her sense of well-being? “Yes,” said Pretlow, who earned a degree in French at Norfolk State University in 1971.

Married to Robert Pretlow, a civil engineer, she has a son, Christopher Peace, 45, who lives and works in Chicago. Before she became a pastoral assistant at St. Mary’s in 2005, she owned a shipping business, managed a print shop, and worked for an attorney. “My life is so immersed in the church,” said Pretlow, who works (and volunteers) about 60 hours a week in the parish. “It is hard to separate them. The church has sustained me through a lot of bad times.” Pretlow said Sept. 1 is a watershed moment, one she celebrates each year. “I look at it as the day I was reborn.”
To donate or for more information, please contact: Racquel “Rocki” Mayner, director of development, (757) 351-6332.