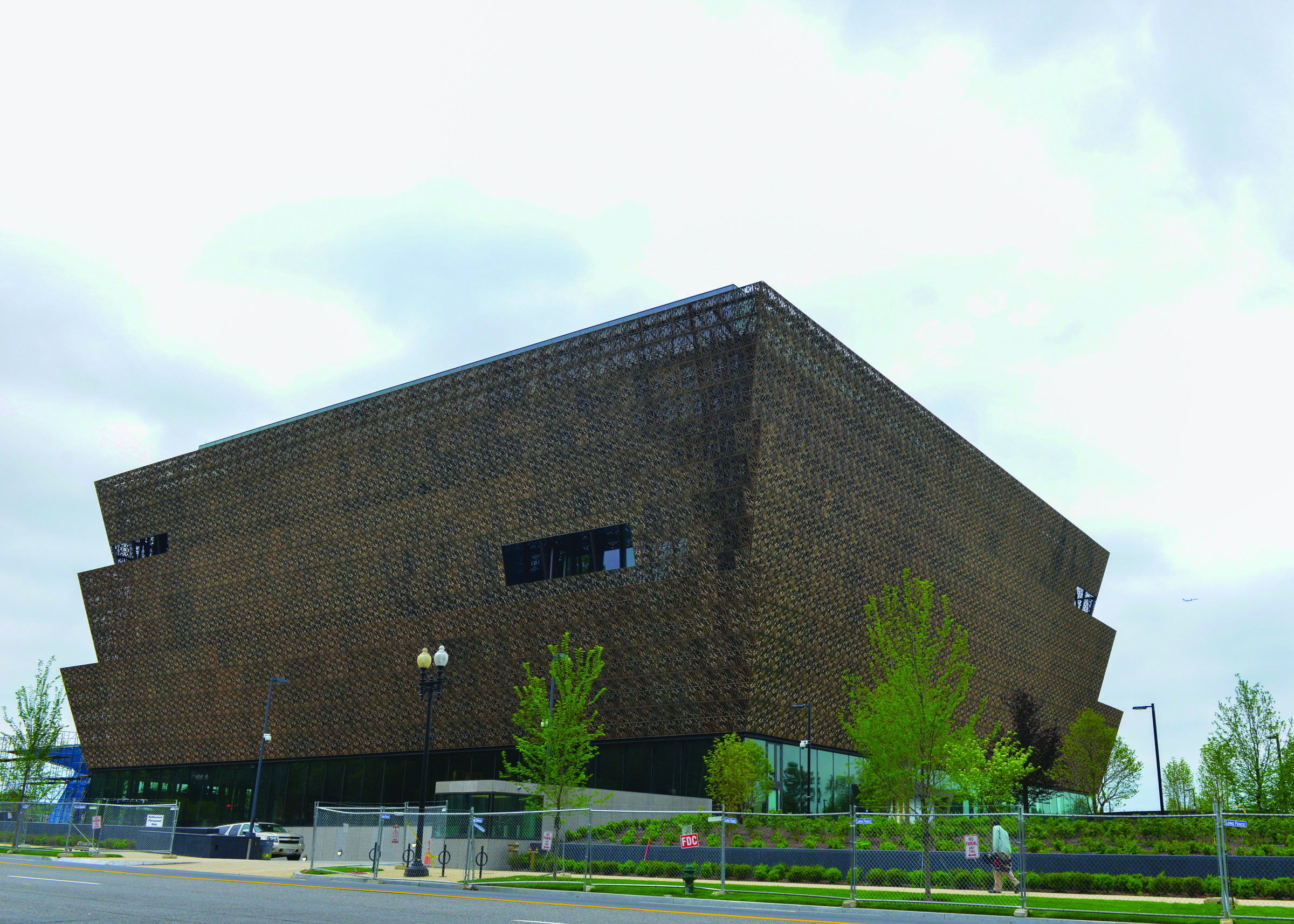 President Barack Obama waves to the crowd during the grand opening ceremony for the National Museum of African American History and Culture on the National Mall in Washington, D.C. (Freddie Allen/AMG/NNPA)

After decades of proposing, planning, fundraising, acquiring over 36,000 artifacts and building hundreds of exhibits illustrating the near 400-year Black experience in this nation, the Smithsonian National Museum of African-American History and Culture was officially opened Sept. 24. The nation’s first Black President Barack H. Obama stood at its front entrance and delivered the keynote address, recognizing this special moment, before he cut a ribbon, with his wife Michelle, and Former President George Bush and his wife Laura.

Thousands of people of all races and creeds then streamed into the building, beginning a weekend-long period of patronage. The President sought to connect the nation’s past and present, to put the importance of the museum in perspective, stating that it offered a place to better understand public unrest after police shot and killed Black men in Tulsa, Oklahoma and Charlotte, North Carolina in separate incidents.

“This museum provides context for the debates of our times,” Obama said. “It illuminates them and gives us some sense of how they evolved, and perhaps keeps them in proportion. Perhaps it can help a White visitor understand the pain and anger of demonstrators in places like Tulsa and Charlotte. “But it can also help Black visitors appreciate the fact that not only is this younger generation carrying on traditions of the past;

but, within the White communities across this nation we see the sincerity of law enforcement officers and officials who, in fits and starts, are struggling to understand, and are trying to do the right thing.” The National Mall, where the new museum is located, is nearby to monuments to George Washington, Thomas Jefferson, Abraham Lincoln, and Dr. Martin Luther King, Jr. A number of residents of Hampton Roads attended the event on Sept. 24 and plan on going back to take a less hectic and tedious tour of the exhibits on hand.

Nikki Lowery Southall, who was raised in Washington, D.C. and now runs a family-owned cleaning business in Norfolk, was accompanied by members of her family to the opening.
She said that on Sept. 24, she and her family toured the bottom floor of the facility where an exhibition on the African slave trade included an auction block where the slaves stood and were inspected by prospective buyers.

“This was a once in a life time event,” she said. “This museum is very important and as president (Obama) said, its contents and meaning should not be separated from other elements of our nation’s history. It must be embraced.” Joe Dillard, the President of the Norfolk Branch of the NAACP, said, “The museum shows the full range of our history. “It was nothing sort of amazing,” said Dillard, who took a four-hour personal tour. “The museum puts our history in perspective from our time in Africa, to slavery to Jim Crow segregation to the Civil Rights Movement to now. It shows that our history did not begin with Jim Crow segregation, but before we arrived on the shores of this nation as slaves.”

Most of the thousands of patrons who visited the site on opening day had to cope not only with large crowds and security, which is ever present in the nation’s capital, but the museum personnel preparing for various special VIP events and putting the finishing touches on the new museum. Most of the patrons needed tickets to enter the facility, and in the case of Wanda Camm of Chesapeake, and a small group of friends accompanying her, their tour of the facility took place at 9 p.m. Sunday night. But the facility was still full with people from all over the country.

“One of the most fascinating exhibits involved a life size statue of President Thomas Jefferson who authored the Declaration of Independence, who was standing near bricks with the names of the slaves he owned, including his Black mistress Sally Hemmings and her children,” said Camm. “Then at the slave ship exhibit,” she recalled, “you enter a dark room initially, but you can see the replica of the ship which transported captured Africans. You could hear a narrative of Africans who described their lives before being forced on a ship, waking up and laying next to someone who had died, or those who jumped ship and drowned rather than face being enslaved in a foreign land.”

Camm and others who visited the museum say that if Whites tour the facility they would know “just how much Black people have endured, sustained themselves and managed to survive to be the people we are today.” “They will fully understand who we are as a people,” said Camm. “I think Donald Trump should take a tour because then he will understand more fully the racial history of the nation and this may change his view of Black people and how he has been speaking to us, seeking to win our vote.”

Fran Taylor, who accompanied Camm to the museum, said the Jefferson slave exhibit and the shackles used to restrain slaves caught her emotionally. “You had shackles for adults and then you could see the ones for the children,” said Taylor. “You could see a letter from Benjamin Banneker (a Black man and one of the designers of Washington, D.C.) to Jefferson, asking how could he write the Declaration of Independence and still own slaves.”

Camm, Taylor and others say, come January, they will hopefully tour the museum and attend the inauguration of the first female president, Hillary Clinton. “And so, this national museum helps to tell a richer and fuller story of who we are,” said Obama. “It helps us better understand the lives, yes, of the President, but also the slave; the industrialist, but also the porter; the keeper of the status quo, but also of the activist seeking to overthrow that status quo; the teacher or the cook, alongside the statesman. And by knowing this other story, we better understand ourselves and each other. It binds us together. It reaffirms that all of us are Americans – that African-American history is not somehow separate from our larger American story; it’s not the underside of the American story, it is central to the American story. Obama continued “That our glory derives not just from our most obvious triumphs, but how we’ve wrested triumph from tragedy, and how we’ve been able to remake ourselves, again and again and again, in accordance with our highest ideals.”