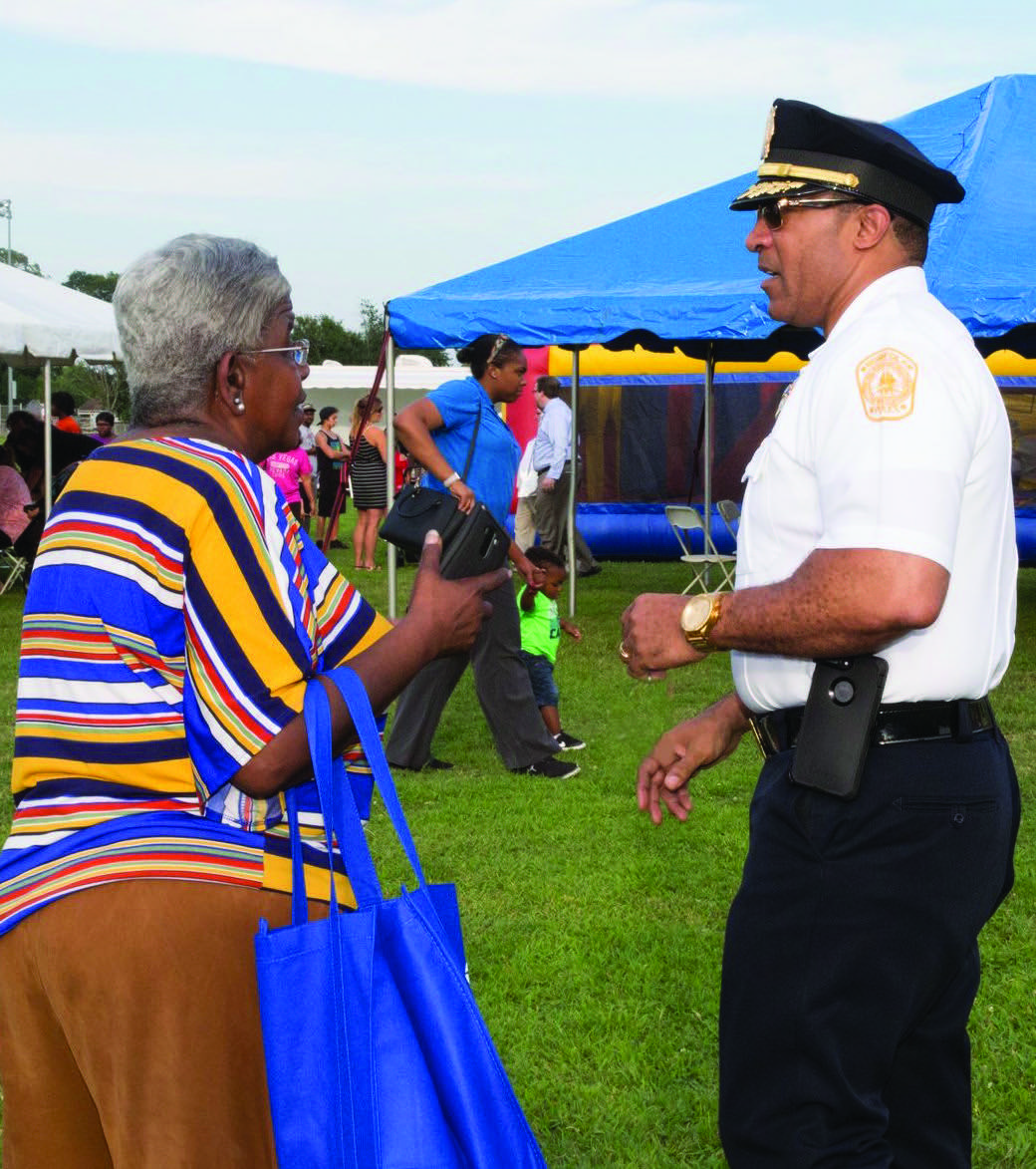 Looking at his resume, one can count at least 10 jobs including Chief, that he has held since leaving the police academy and donning the uniform as a “rookie” out on the streets of Norfolk to serve and protect its citizens. From those various venues, he was able to see how all of the moving parts of one of Virginia’s largest law enforcement agencies worked.

As COP or Chief of Police, now he is looking at the role of law enforcement from the perch. Despite this top view, Boone said he is still “out on the streets” regularly observing how his officers protect Norfolkians, during the day and as they sleep in the wee hours of the morning.

He said he wants to make sure his officers are professionally carrying out the policies put in place to enable them to serve and protect the city’s residents and businesses effectively.
Boone admits his most recent role has “taken a toll,” for he is lucky to get four hours of restorative sleep during a 24-hour period or enjoy other aspects of life with his family. He takes the “buck stops here” posture seriously with the realization that ultimately, good and bad outcomes reflect his leadership. Norfolk’s Mayor Kenneth C. Alexander and the city manager have expressed strong confidence in his leadership.

Structural changes Boone has implemented within the Detective Division have impacted crime throughout the city. Violent crime is down 19 percent, in addition to a 14 percent reduction in property crime.

Boone said he has continued the practice of devoting resources to parts of the city which have the highest incidents of criminal activity. He believes this is a proactive means of abating it.

“I am a huge fan of Chief Boone,” said Mayor Alexander, who was elected the city’s first Black mayor eight months before Boone ascended to Chief. “He is intelligent, compassionate, but tough and transparent.

He worked his way up through the system to become Chief, passing both the professional and personal assessments needed to get to his current status. And he did it the old-fashioned way, he earned it, because no one gave him anything … he earned every stripe.”

Boone said he is proud of the low level of officer-involved shootings which can spur controversy, tensions and distrust between police officers and residents, especially in the Black community.

Beatrice Garvin Thompson, who is the President of the Old Huntersville Civic League, said Boone has fostered a culture which has created a friendlier relationship between his office and residents of one of the city’s oldest historically Black neighborhoods.

“I admire how he was promoted to the ranks to become Chief after 28 years,” she said. “He has created an atmosphere in his department where his officers are working more directly with the citizens, especially the Resource Officers. They are present at our events; they are concerned and attentive to our needs. I think that is reflective of the leadership from Chief Boone and we appreciate it.”

Chief Boone mandated the wearing of white shirts for the rank of Captain and above only. The white shirts, he believes, make a strong statement and provide a means for officers and citizens to readily recognize command/executive personnel within the Department.

Another of his mandates instructs officers to follow his lead in sharing their personal cell phone numbers with the public to breed cooperation and trust.

This has enhanced the candidate pool, provided prospective officers an opportunity to intern along side Norfolk police officers, and it has created an open door for successful interns to enter the police academy.

Chief Boone said he has been working to increase the number of minority officers within the Recruitment Unit, which has resulted in an increase of diverse and qualified applicants, and specifically, minority candidates to police a city which is majority-minority in population.

Officers realize the potential for danger each time they go out on patrol. But Boone said training in deescalating tension-filled encounters between them and citizens has played a significant role in this area.

The Chief said his views of policing have been formed based on his own law enforcement training, experiences behind the wheels of a cruiser, exposure to academic training and being a child of the urban culture.

So he makes his rounds to civic league meetings, funerals and other gatherings to show the uniform and his interest as one of the most important officials in city governance.

Boone has made it a ritual to visit the homes of families which have been visited by triplets of trauma, painful violence and loss.

He makes it a practice to visit youth who have been adversely affected by violence, to impress upon them that he and his officers care.

Boone said he also learns what those youth like, and brings them a cheerful token he knows will make them smile and leave them with a positive memory in the wake of a negative experience.

He said this gives him the chance to see and hear the family in their environment and express his condolences and concerns. Boone said police patrols are not enough to curb crime and foster a sense of safety in all corners of the city.

The Norfolk Police Department has more than 25 community initiatives and partnerships. Under his leadership, Boone has sought to impact the culture of community policing by expanding citizen engagement with creative platforms to foster positive relationships between citizens and officers.

Many of the latest initiatives are unique to Hampton Roads law enforcement agencies, and the state of Virginia, such as the Cops and Curls initiative. This is a yearly formal event to encourage girls 6-13 years of age from underserved communities as part of the back-to-school activities with conversations and movie outings. Boone said several agencies across the country contacted the department to use its model, after a video of the event went viral.

More than 50 officers are involved in the Police Leadership Unveils Success – PLUS – a partnership with the Life Enrichment Center of Norfolk, a faith-based community agency, to improve literacy through weekly tutoring for one hour in Norfolk’s Title 1 public elementary schools.

Another initiative – Five-O and Fades – was developed specifically to provide an opportunity for difficult conversations between men and officers to take place inside of neighborhood barbershops.

“PAL,” the Police Athletic League, provides activities for youth as an alternative to involvement in activities that could lead to criminal conduct or gang involvement. Also, youth camps for boys and girls, 7-16 years of age, run from April through mid-summer.

Several other engaging outreach programs exist to encourage positive relationships between Boone’s department and the community.

Finally, every first and third Thursday morning, citizens can tune in to WGPL-1350 AM from 9-9:30 a.m. to hear police officers address community concerns such as community policing, crime prevention, citizen engagement, and recruitment. Listeners with questions are encouraged to call in.