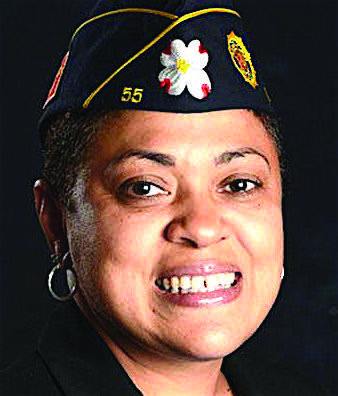 There are more than 22 million Americans who are veterans having served in one of the branches of the nation’s military during peace and war.

Over 2.4 million of them, men and women, belong to the American Legion, which has a mission of organizing commemorative events and providing assistance at Veterans Administration hospitals and clinics.

Four years ago, The American Legion named Verna Jones as its new executive director of the Legion National Headquarters in Washington, D.C., making her the first woman and African-American to be named to that position.

Jones is an attorney and Army veteran who served as a personnel sergeant. It is a mark on her resume which has gone unnoticed by the national media for the most part until recently.

Jones works out of the Washington, D.C. headquarters where she is the policy liaison to the White House, Secretary of Defense and Congress on issues related to veterans. Previously, she had served as the director of the Legion’s veterans affairs and rehabilitation division.

While the American Legion is a nonpartisan and not-for-profit organization, it has great political influence perpetuated by its grass-roots involvement in the legislation process lobby for issues supporting veterans from local districts to the U.S. Capitol Hill.

In a recent interview with the GUIDE, Jones discussed a list of the critical issues facing veterans and provided by the Department of Veterans Affairs, especially health and housing assistance.

Then there are the issues related to PTSD, employment, drug abuse, homelessness and suicide.

Membership is open to veterans who have served from August 1990 – Present. All current active duty military may join.

Jones said the recent controversy over the Veteran’s Administration medical centers struggling to serve the millions of ex-service personnel eligible to use them, was one of the first and complex issues she confronted upon ascending to her job three years ago.

The Legion has been devoting resources to ensure veterans know about all of the benefits the V.A. and other agencies provide for them. She also wants them to know about the services the Legion sponsors related to housing and healthcare.

Jones said 22 veterans for various reasons take their lives each day. Many of them are not receiving any medical services from the V.A. that are designed to deter suicides. Those who do seek help for suicides are less likely to do so, she said.

Jones said the incidence of suicide among veterans is linked to various forms of mental illness, due in part to Post-Traumatic Stress Disorder (PTSD). She also mentioned the expanding Opioid crisis which is causing addictions and deadly overdoses among not only veterans but the general population.

The V.A. coordinates with other veterans support groups, like the American Legion, to help new and longtime veterans make the transition from military to civilian life.
But many fall through the cracks, overcome by the physical and emotional issues facing them, despite the billions spent to help them cope.

The V.A. spends millions on temporary and permanent housing resources for new and old veterans. But many wind up homeless, due to mental illness or other issues deterring them from successfully re-entering civilian life, establishing ties with family and becoming viable employees.

Unfortunately, Jones said, Legionnaires, working as outreach workers in the streets, have encountered many veterans who refuse even to access such programs, opting to remain homeless for various reasons.

Jones, a native of North Carolina, married a serviceman, divorced him and then, “ having to support herself,” enlisted in the military herself.

Jones, in an interview with The Huffington Post shortly after taking office, became animated when asked about sexual assault in the military, an issue that several members of the Legion, including herself, have testified about before Congress.

She said the organization has said the military needs to have a “zero tolerance policy“ on the issue.

“To those people who may assault people, [we need to] let them know that we’re not going to stand for that, and there are some very serious consequences the first time,” said Jones. “So we’ve got to create programs, we’ve got to create awareness, and we have to be willing to say that military sexual trauma exists. Stop sweeping it under the rug and pretending it’s a small thing, because it’s not.”

The Legion has taken some progressive stances on many issues, including gender inclusion and adhering to the military’s accepting Gays as Legionnaires and in the military, after the Defense Department dropped its opposition.

It’s also looking at taking a position of permitting the use of medical marijuana to treat pain and symptoms associated with PTSD.

Jones said the Legion adopted a resolution stating its disapproval of marijuana for medical or recreational use until it is removed from the federal government’s illegal list of such drugs such as LSD or cocaine.

She said that once that is done and research indicates its medical benefit to veterans, the Legion would consider supporting its use.

“There are so many things which need to be done for our veterans,” said Jones. “There are so many challenges to finding the visions and the resources to help veterans to handle the myriad of issues they face each day. But we must keep this in perspective: most of the 22 million veterans in this country are doing very well.”

Women make up only 3.3 percent of the Legion, but they have recently assumed very important roles and positions in the 98-year-old organization.

The Wisconsin resident noted that prior to her election, she encountered leaders of Legion posts which did not even admit women. Now her image will be posted prominently as the first female National Commander on the walls of outlets reluctant to embrace change.