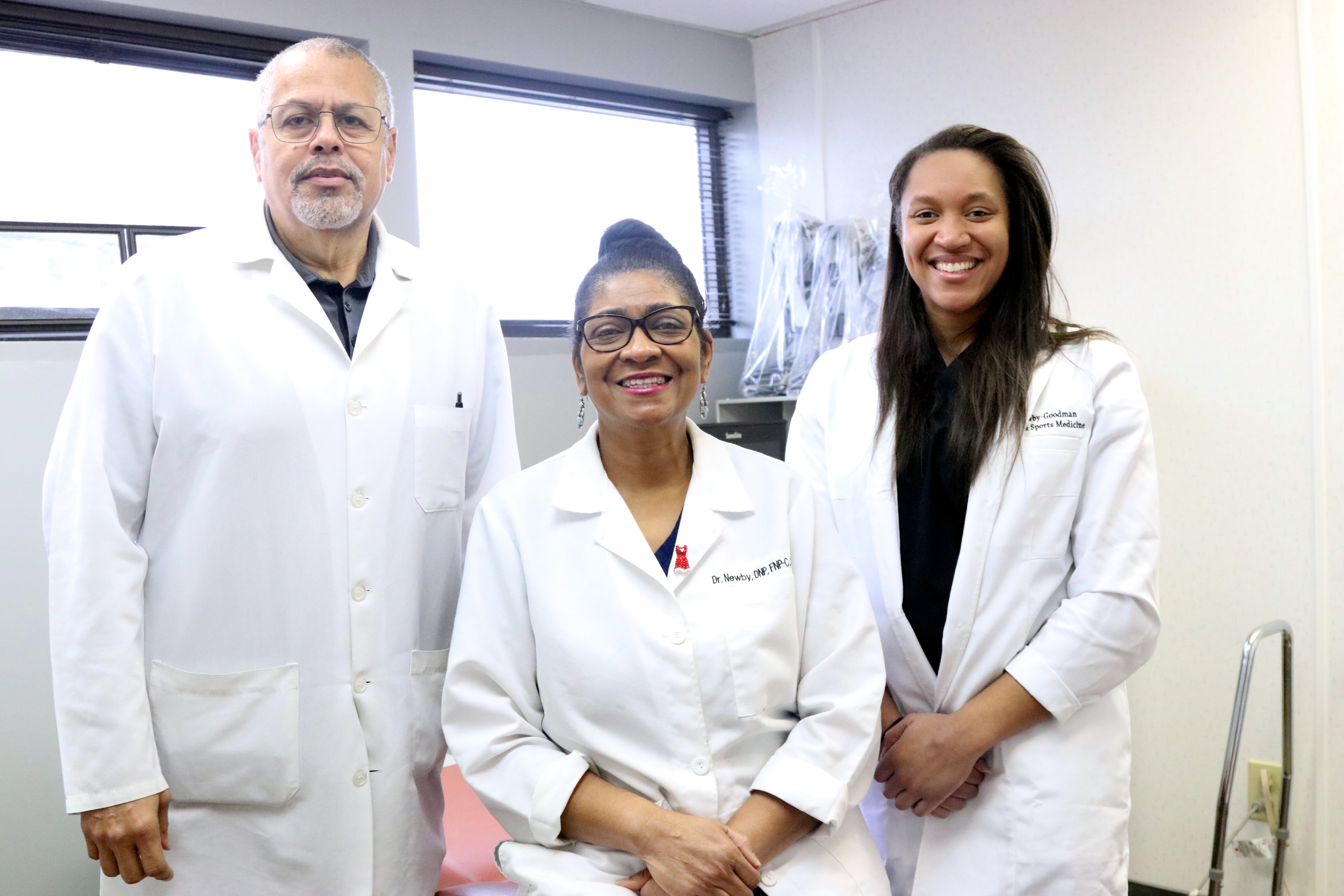 Each morning James Newby II MD, and Olivia Newby, DNP, and their daughter Marcia Newby-Goodman MD travel to work at Primary Care Specialists, their Norfolk medical practice where they provide health care services to their many patients.

Dr. James Newby II is a native of Norfolk and his wife is from North Augusta, South Carolina. The union was developed while he was interning at Howard Medical School.

Dr. Olivia Newby is the co-owner and President of the Healthy Living Center (HLC), a (501)-3c nonprofit which focuses on disease prevention, chronic disease education, and healthy nutrition habits.

The HLC is located at 930 Majestic Avenue nestled between the Broad Creek and Middle Town Arch neighborhoods near NSU on the first floor of the building where the doctors’ offices are located.

Additionally, Dr. Newby-Goodman developed a passion for orthopedics and sports from childhood when she broke her toe, training for the 2004 Olympics.

She was not one of the finalists who competed in Tokyo that year. So she decided to pursue her interest in the field of Sports Medicine at UNC, completing a fellowship, before joining her parents’ family practice business a few years ago.

Dr. James Newby’s father was a physician at Norfolk Community Hospital (NCH) before he died. He built his practice and reputation as a community physician.

Their sister Dr. Cassandra Newby-Alexander specializes in the study of History and is dean of the NSU College of Liberal Arts. She recently moderated a Black History Month panel discussing points about the 2022 National Black History Month theme, “Black Health & Wellness.”

A short distance away from the Primary Care Specialists location along Corprew Avenue once sat NCH, the inspirational link to the Newby clan’s present.

Norfolk Community Hospital was the example of African Americans collectively building an institution to serve their community with respect and equality when Jim Crow relegated them to the “colored” wards and waiting rooms.

Dr. James Newby II was 15 when his father died, leaving his son with cherished memories of vacations, little league baseball, and basketball games.

But with the help of his mother, relatives, and extended family, Newby and his siblings moved forward with their careers and the ability to apply their skills in their hometown.

He recalls being one of two in the advanced classes and seeing few Black teachers.

“I had no clue about pursuing college or a degree,” he said. “I wanted to see more diversity.’

He decided on Hampton University, where he majored in biology. His father had gone to Lincoln

“But I had no idea of going into medicine,” he said.

He enjoyed the Black educational, social traditions that the HBCU provided, with its majority Black student body and faculty.

Prodded by family and friends, and influenced by his fellow students, he enrolled at the Eastern Virginia Medical School (EVMS) in Norfolk.

He was one of seven Black students in a class of 50.

As tradition has it, at the end of their tenure, students experience ‘Matching Day’ when they are selected for a residency at a hospital to hone their skills for professional practice.

Dr. Newby said he did not receive one. But his interest in medicine was not derailed. He opted for Howard Medical School where his father had trained.

“It was the best decision I ever made, “ said Dr. Newby. “I got excellent training and met many of the residents who had trained at Norfolk Community Hospital.”

“We shared many things in common,” said Dr. Olivia Newby, who met her future husband at Howard. “That included medicine and serving our

community.” Her father was a military man, and her mother was an English teacher.

When the couple arrived in Norfolk, James Newby II joined the Norfolk Community Hospital where many of its physicians knew his father.

He admits it is likely that his father’s connections and reputation helped him get established.

Dr. Newby encountered a retiring physician who suggested he take over his practice and avoid having to start from scratch.

He recalls the practice was in the Medical Professionals, a building at 549 Brambleton Avenue in downtown Norfolk.

A group of 12 Black physicians, in varying fields of medicine called the Medical Associates, occupied the building, including at one point before his death, his father Dr. James Newby, Jr.

In 1987, instead of moving his practice out of the urban core of Norfolk into the suburbs, as many of his older and contemporary colleagues did, Dr. Newby and some others remained.

He moved his practice to Majestic Avenue in a building previously owned by Community Hospital.

By 1998 Norfolk Community was closing down, but the Primary Care Specialists remained in the community.

Dr. Olivia Newby developed her own specialty over time as the Newbys built the Healthy Living Center (HLC) which she runs as part of their medical services.

It is designed to provide a holistic approach to improving health and wellness to confront the medical disparities plaguing Black people who make up most of their clients,

The HLC is located on the first floor of their office building and provides programs aimed to educate on nutrition, physical exercise, and changing lifestyles to prevent and/or reverse the impact of diseases, especially diabetes.

Drs. James and Olivia Newby have national diabetes certification to provide medical care for patients. It is one of the most serious challenges affecting the health of the Black American community, according to an article, “Culturally Tailored Group Visit for Diabetes,” by Olivia J. Newby, and Deborah C. Gray, who lectures at the ODU School of Nursing.

In it, the authors state, “The incidence of diabetes is highest in Blacks 65-75 years of age; however, statistics indicate that 4.9 million, or 18.7%, of Blacks aged 20 years have diabetes. Black Americans have more than double

the risk of developing diabetes than non-Hispanic whites”

According to the United States Department of Disease Control and Prevention, Blacks are disproportionately affected by the disease, have a higher rate of end-stage renal disease and amputations.

Black men are more likely to require dialysis for end-stage renal disease from diabetes. Black men and women were found to be 2.3 times as likely as non-Hispanic whites to die from it.

The HLC partners with other medical institutions for programs like Silver Sneakers for seniors to provide physical activities and other options to combat diabetes and other maladies.

The HLC has built a vegetable garden next to the building and provides fresh veggies for families living nearby.

“We are independent, and we are progressive while serving the Black community,” said Dr. Olivia Newby. “That is a big deal because that gives

our patients a sense of comfort. We are not strangers to the people we serve.”

This sentiment is not missed by the newest Newby doctor who has joined her family’s practice and will carry the family business forward.

“When I was coming up, my dad was so busy working and building his practice,” said Dr. Marcia Newby-Goodman. “I would ask, ’are you done yet?’ Because he was always coming and going.”

“But you have to step back and look at the blessings of being a physician and being a servant leader in your community,” she continued.

“There is no higher calling than helping others and like my father and mother, giving back to the community.”