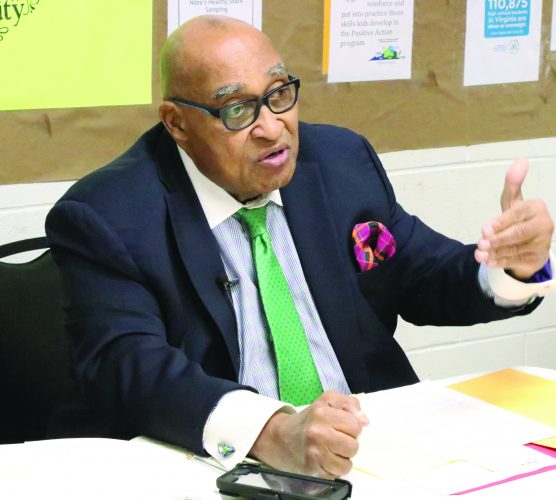 After 30 years serving Ward 4 on Norfolk’s City Council, the Honorable Paul Riddick will not seek reelection to another term.

At this point, he has the distinction of being one of the longest-serving members of any council in Hampton Roads.

Riddick, 74, is also one of the most controversial figures on that body for the past two and a half generations.

A growing list of aspirants will be running for his seat.

But Riddick’s allies and foes are wondering who will replace one of the most consistent voices against injustice and inequality to ever sit on that city’s governing panel.

Riddick in 1992 won his seat shortly after the city installed the Ward system of electing council. This came after a decade of legal wrangling with the city of Norfolk’s conservative political factions.

on half of the five plaintiffs in the Herbert Collins vs. The City of Norfolk.

As a result of Norfolk’s new ward system, two superwards were created. Superward 7 was composed of mostly Black enclaves, including two smaller majority-Black wards 3 and 4.

Riddick, in a hotly contested race, won a seat in Ward 4, the first non-incumbent to win under the new system.

Riddick would accompany his father to important political meetings and got a look at how Black political power was focused.

His Uncle Jacob was a key Norfolk business operative. In letters Riddick read between his uncle and Dr. Jerome Holland, an ambassador and the President of Hampton Institute, the two orchestrated the creation of Atlantic National Bank in Norfolk. It was one of three banks on the East Coast developed with African American-White cooperation in 1971.

It once sat in the Rotunda Building on St. Paul’s Blvd., which is now an upscale condo complex.

According to Riddick, it was the political fight in Norfolk over the city’s abolition of busing to desegregate its elementary schools that triggered his interest in running for council.

In 1954, the U.S. Supreme Court issued the Board vs. the Brown of Education Decision that declared “separate but equal” public schools were illegal. Norfolk did not fully comply with the Brown Decision until the mid-70s and then only briefly.

The city and its school board fought a suit filed by Paul Riddick to retain busing to desegregate Norfolk Public Schools (NPS) in 1983.

But the suit backed by Black parents, civic leaders and the NAACP failed and the city created a system it called “neighborhood schools”.

It did not take Riddick long to establish himself on council as the loudest and most criticized voice from the council dais.

In the next round of elections in 1994, a key ally Herbert Collins a grocery store owner, joined the council, and he and Riddick established a vocal alliance against city policy applied to the Black community.

Soon, they would be joined by Educator Daun Hester, who replaced Father Joseph Green, who had served as the Vice Mayor.

The Riddick-Collins duo was often at odds with the council majority in issues, led initially by Joe Leafe and then Paul Fraim, who became Mayors.

Leafe was often joined by Conoly Phillips and Mason Andrews and Hester on key votes. The men Riddick said were very conservatives pols from the city’s west.

Often there was 5-2 vote on many issues and the white male duo often found themselves the two dissenting votes.

Riddick always pointed out the power of the “shadow government” composed of rich white businessmen and white development groups on the city’s Westside.

He and other political allies called out Black politicians and civic leaders, including Black Councilman John Foster. According to Riddick, the “shadow government” had historically ignored the needs of Black residents.

Over the years, this reporter has noted Black business and political figures, often at odds with Riddick’s mention of the existence and influence of a Norfolk “shadow government”.

But despite the odds, Riddick said he wanted to make his voice heard.

And, in his position as councilman, he demanded the city provide funding for city services, policing, education, and economic development for the Black community which he said was neglected until redevelopment plans were laid on the political table.

A firm example of Riddick’s consistent stance on this issue that has resonated throughout his three decades on council appeared in a July 28, 1993 edition of the GUIDE in an article ”Riddick Urges City to Use Black Contractors.”

“Black contractors, architects, construction supplies and companies are being shut out of the millions of dollars in contracts for city projects,” the article noted.

At the time, Norfolk was building a $13 million addition to its jail complex, new Ruffner and Norview Middle Schools, Nauticus, Harbor Park and extensive renovation of the old city Arena which is now the Harrison Opera House.

Riddick said in the article that despite the existence of more Blacks in city government and various construction firms such as Curtex Construction Company, Blacks were being left out or overlooked, so far as competing for bids for city projects.

Riddick also chided the city for its inability to employ an appreciable number of Black laborers for those projects.

Riddick would later give voice to the lack of development and investment opportunities during the construction of MacArthur Center and other development projects which have transformed downtown Norfolk over the past three decades.

Today, the St. Paul’s Redevelopment Project is the newest multi-million dollar development in Norfolk minus Black participation, in his Ward 4.

Launched three years ago, the plan calls for demolishing the Tidewater Gardens, Young Terrace, and Calvert Square public Housing communities which will transform a massive footprint of downtown Norfolk, the home of some of Norfolk’s poorest Black families.

The communities which house more than 4,000 people are being replaced with mixed-income housing and business development.

As a result of a suit filed by residents, Norfolk is required to assure a large number of displaced residents are allowed to return to the newly developed communities.

But Riddick calls the redevelopment a gentrification on a scale unequaled on the East Coast at a time when Norfolk has four Black members of council and on other important governing panels.

“Again, the development and economic train has left the station and Black folks are not on board,” Riddick said. “We will be left out of the major planning and construction. We will see a huge transfer of generational wealth from the East to the West side of this city.”

Riddick said he is also concerned about the multi-million redevelopment of the Military Circle Mall Complex. Several deep-pocketed Blacks including Pharrell Williams, Bruce Smith, and Emmitt Smith have offered plans.

Riddick’s Ward 4 runs from Harbor Park southward to Berkley and Campostella, all of St. Paul’s Quadrant, Grandy Village, Ingleside, Poplar Halls, and the western part of the airport complex near Azalea Garden.

“There has been some change but not enough to make a difference in our community,” said Riddick. “We don’t have enough people or politicians speaking out and challenging the system. They fear or are too afraid to offend their white colleagues who serve on the council from other areas of the city.

Before the COVID pandemic, Norfolk held an in-person observance of the birthday of Dr. Martin Luther King, Jr.

Instead of a watery tribute to King, Riddick used this opportunity before the huge gatherings to deliver his “Two Norfolks” speech.

One Norfolk, said Riddick, offers well-resourced neighborhoods with stable schools where residents do not have to drive two miles to buy groceries.

The other Norfolk has failing schools, commercial and food deserts, and a lack of economic opportunity for its residents.

“It is not hard to distinguish the neighborhood where I live and the one with all of the historic privileges,” he said.