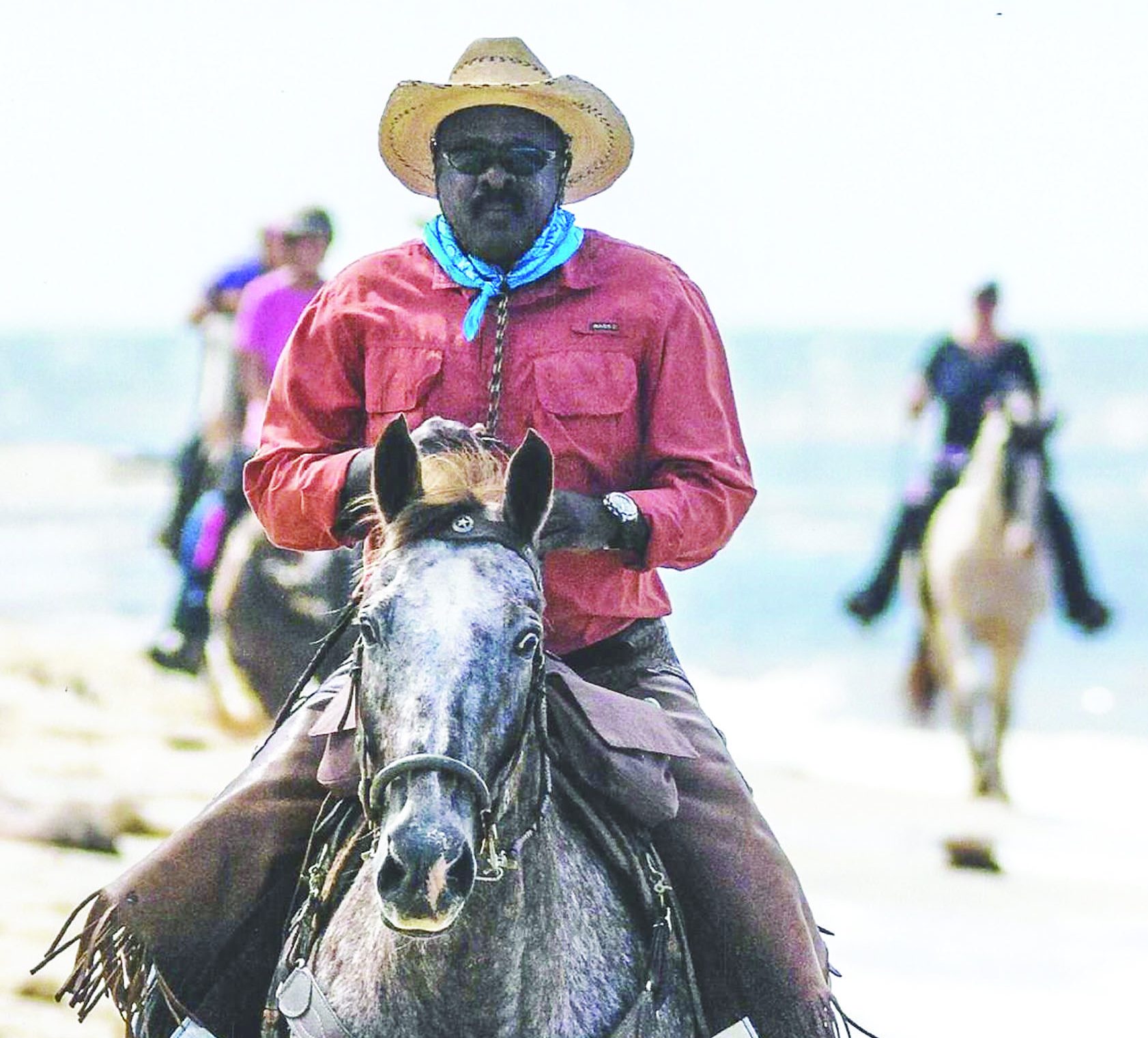 By Veronica A. Davis
Contributing Correspondent
New Journal and Guide

CAPE CHARLES, Va.
Tucked away quietly on 15 acres of beautiful land is the Burton Farm, a horse ranch. It does not take long to achieve a sense of relaxation after feeling the cool breeze from the Chesapeake Bay and watching the horses roam the property. Riding up to greet you is an African-American man on a horse, who reminds you of the twins from the R&B group the Whispers. Ben Burton is his name; horses and fundraising for the Eastern Virginia Special Olympics is his game.

Native to the Eastern Shore, Mr. Burton is the first African-American Road Contractor on the Shore. The question then becomes how does one go from being a contractor to Cowboy?
According to Mr. Burton, he has had a love for horses since he was a little boy. When he was ready to purchase his first horse, Allan Gladden, a former State Trooper, reached out to help him. Mr. Gladden drove 20 miles to Cape Charles to help him get his stable established. Wanting to become an experienced rider, he joined the Eastern Shore Trail Riders, where he was able to build his skills in riding. “Horseback riding is not just about riding on even terrain; that would be boring. When you are with a riding group, they choose trails that provide challenge to the rider and the horse; this is where the adrenalin flows,” he said.

It was time for him to share his love of horses with others four years ago when he was approached to host a Riding benefit for the Eastern Virginia Special Olympics. “I felt that it was a great cause; anything that they needed to get the young people to the Richmond Championship I was more than willing to do,” said Mr. Burton. According to Ms. Dorie Arthur, “His decision to host the event came at a great time in that the organization was $10,000 in debt and wasn’t accredited.”

Through the efforts of a new Area Coordinator, Ms. Debra Marshall, monies were donated to get the organization out of debt, and they worked tirelessly until they achieved accreditation status. In 2012, Ms. Marshall stepped down and the council then voted in Ms. Arthur to take her place. The organization was in need of a fundraiser to keep them afloat. “Ms. Sandy Taylor was the driving force behind the benefit,” said Ms. Arthur. “She worked to find someone who could host the ride.

“The year that I started, she had coordinated the event and organized the project with Mr. Burton. Having this benefit has been really great because it enables us to keep the funds we need in the bank account to support the participants.” The 12 participants who were to represent the Eastern Shore this year visited the ranch to meet Mr. Burton and the Riders.
“To see their faces light up and watch the young people interact with the riders and horses is what fills my heart with joy every year.” Mr. Burton confessed with his eyes sparkling and beaming with happiness.

“Ben was great to step up and host the event,” said Ms. Sandy Taylor, volunteer host of the annual benefit. “We raised thousands of dollars to enable us to send 12 participants to go to Richmond for the Special Olympics Championship games.” The Special Olympics group expressed that it would like to introduce Volleyball as a new sport. Special Olympics Coach Chris Marshall said, “I am hoping that we can get more donations to afford us the opportunity to have that sport added.”

She noted at the time of this article, that final accounting had not been completed for the benefit, but added, “We are still accepting donations and are selling peanuts as a fundraiser in cooperation with the historic Virginia Diner.” The Virginia Diner is a diner and mail order gourmet peanut shop located in Wakefield, Virginia. Ms. Arthur added, “It was a great event held at the University of Richmond; participants were able to be seen by the Mission of Moms program, Fun Fitness and other healthy programs that they would not have had if they did not attend. One participant was diagnosed with a gum disease that would not have been treated if he did not attend. He was given a treatment plan to address the problem; they are estimating that it is into the thousands of dollars of repair. Through his insurance and Missions of Moms, the participant will be able to recover with a healthy smile.”

She continued, “All the athletes placed with gold, silver and bronze in Track games. It is also important that we acknowledge that this would not be possible without the Council of Volunteers. “We look forward to Ben hosting the event every year. He is a great host and the property is so beautiful,” she said. A rider who participates in the benefit annually commented, “We come every year from Delaware to participate in the Burton benefit. This year the trail was excellent. It provided a lot of challenges and the scenes of the creeks were extraordinary. Lunch was held at a site that reminded us of the old west. It was an old barn that was still functional located near Cherry Creek.” Mr. Burton explained that it was not just him who provides the property for the benefit each year. “My neighbors are the biggest asset to making this benefit successful. They allow me to clear a trail that encompasses their properties as well as mine. It is what makes the benefit successful – us coming together as a community.”