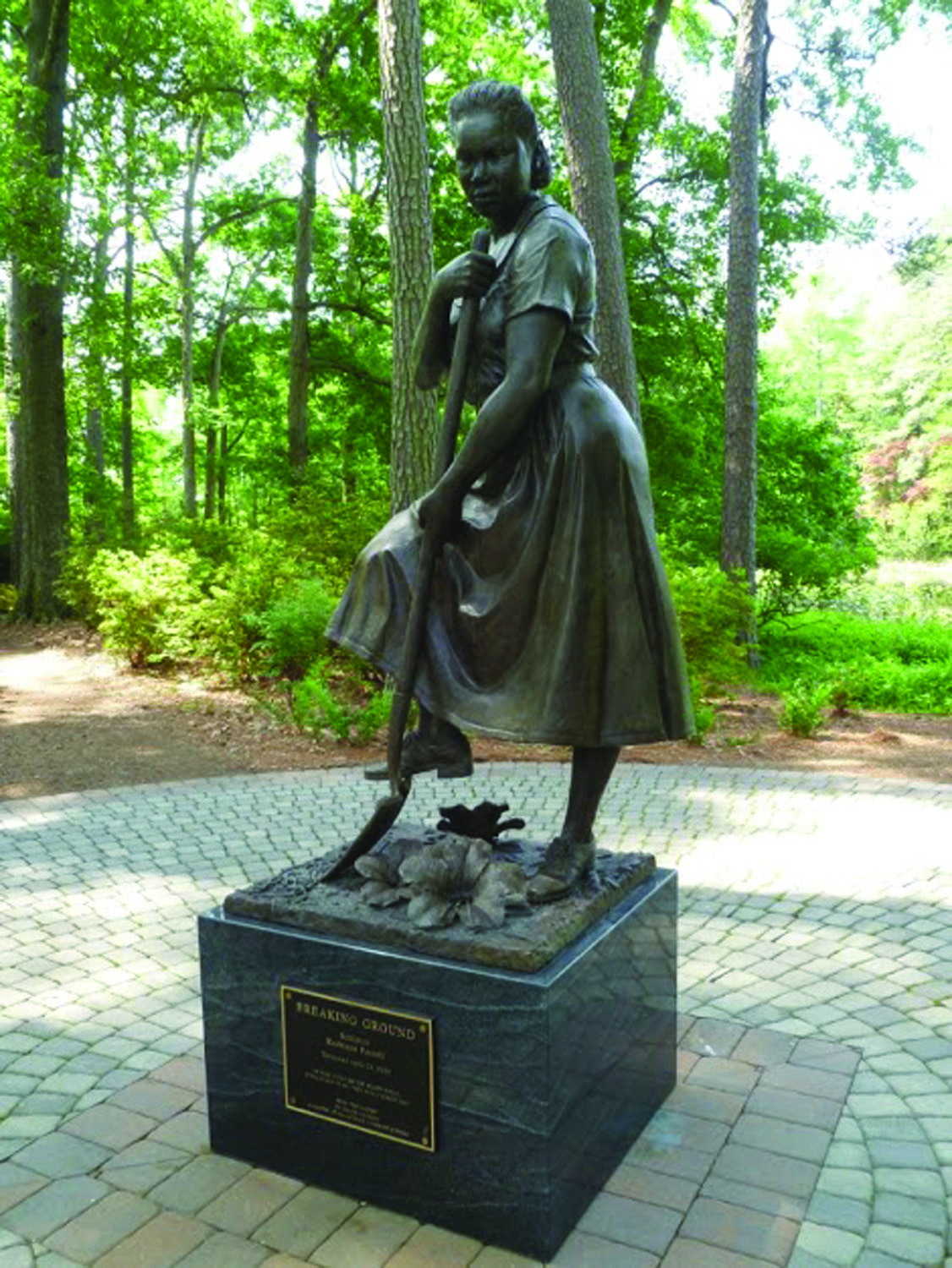 The Norfolk’s Botanical Garden (NBG) has been the destination of thousands of tourists and gardeners during the course of its existence. This weekend, the city and NBG will host the 8th annual celebration to honor the 200 Black women and 20 Black men whose labor 75 years ago cleared swamp land to give life to the gardens. This year’s program is on Saturday, May 21, starting at 11 a.m.The keynote speaker will be Norfolk Public Schools Superintendent (NPS) Dr. Melinda J. Boone, the first Black woman to head the division. Also, Mae Breckenridge Haywood of the Portsmouth African-American Historical Society, and Cecelia Tucker, Advisor to the President of ODU, will be honored.

As part of the celebration, a sculpture named “Intertwined” will be unveiled. It is a 20-foot tall abstract piece depicting entangled vines interlinking with a common spade, the main tool used by the laborers to move dirt and plant the flora that became the NBG. According to Kelly Welsh, the NBG Marketing and Communications Director, the sculpture, crafted by Ilana Spector and Mark Grieve of Petaluma, California, was framed to represent the various themes of the Garden, including the seasons, community, its connection to the land and contributions of the men and women who worked to make it a reality.

For the past decade and coinciding with the Annual WPA Heritage Celebration, there has been an effort to locate and identify and honor any of the men or women alive or dead who were involved in constructing the Gardens from 1938 to 1941. One of the known women still alive is Mrs. Mary Ferguson, aged 97-years-old. Along with the speeches and a reception, book signings of two related books will take place.

Two Books Have Been Written

Two books have been written on the creation and the evolution of the 175-acre site in Norfolk, including one by Amy Yarsinske entitled “The Norfolk Botanical Garden: A Natural Treasurer” which relates to the motivation, construction and economic and racial history of the place. The newest book about the history of the NBG will be released during this weekend’s event. Entitled, “Norfolk Botanical Gardens: WPA Untold Story”, Dr. Martha M. Williams of Chesapeake tells the story of “who these women were” and the role the 200 Black women played in constructing the NBG.

Yarsinske said funding for the project came from the Franklin Roosevelt-era Work Progressive Administration (WPA) designed to provide public works jobs for the thousands of unemployed artists and laborers during the Great Depression. Norfolk and other cities in Hampton Roads, then called Tidewater, fought and secured funding for a number of WPA-funded projects, including construction of buildings, bridges, art projects and horticultural projects such as the Botanical Garden.

According to an article in the (New) Journal and Guide on January 22, 1938, 60 of the first wave of Black women to work on the NBG project had first worked in a WPA-funded sewing room project. But when workers were needed for the garden project, city officials determined they would be reassigned to that and other laborious projects. White women were given the sewing work. With the advent of WWII and focus away from the project, many Black women and men were able to acquire work related to the war industry. But one women Josephine Rollins stayed on the job until she retired in 1968, Yarsinske said. “She helped to maintain and manage the place, especially the gardens,” she said.

As a child Yarsinske, a Norfolk native, would accompany her grandmother to “the old garden” and ride along in the tram cars to tour the area. “I was so touched by the beauty of the place,” said Yarsinske. “The history of the place and those Black women and men make it even more meaningful not only for their families who are still proud of the work which is still on display today.”

Dr. Williams said her exploration into the subject of the NBG’s origins began when a group of students at Norfolk’s Ruffner Middle School contacted the site’s leaders in 2003 about diversity. She said the school had formed a chapter of the Community Problems Solvers International, a group tasked with helping locales resolve problems related to race and income. “The students wanted to find out initially why the workforce at gardens at that time was not adequately racially diversified,” said Williams, who is a former Director of Teacher Education at Hampton University. “All they saw were White people working there.”

“So in 2003, at the time, the Garden’s leaders created the Diversity Committee which included Blacks and Whites and people of all races at the site,” said Williams, who has served on that panel since its inception and on the NBG’s Board of Directors for five years. “This is when we began digging into the history of Black women who worked there from 1938 to 1941,” she continued.. “That was the untold story, which we wanted to reveal to the public..”

William said the NBG personnel began a project to collect the names and identification of these women. The media was used, including the New Journal and Guide which wrote stories about the effort. “Another good source was Mr. Matthew Austin, whose mother, Sallie Austin, who had a college education, worked at the Garden,” said Williams. “Mr. Austin, who lived in Berkley, tried to get this story told and recognition for the women. He knew a lot about Norfolk history and he gave us our first look into the lives of these those women.”

“One of the most touching stories was Mr. Austin recalling how his mother would come home tired and exhausted,” said Williams. “He and his brother (would rub her feet) to bring down the swelling.” Several years ago, members of the Diversity Committee, contacted Mrs. Edna Joyce, when she was alive. “She had not been at the Botanical Gardens for over 40 years. She was one of the first women to work there,” said Williams. “Mrs. Joyce said she was surprised and amazed at how the place has changed and transformed into such beauty.”

Williams said, in doing her initial research, she discovered the story behind the lives and contributions of the 200 Black women was colored by the legacy policy of Jim Crow segregation. In a January 22, 1938 edition of the Journal and Guide, Williams said she found an article describing how angry the Black Community was about the working conditions the women endured during those initial stages of the garden’s development.

“There was a picture of the Black women in big coats (in the cold) pushing wheel barrels and shoveling dirt,” said Williams. “Black leaders were outraged because they said such work was not for women, but men or better still – mules.” “A group of Black leaders went to Richmond to complain to WPA regional officials about the conditions,” she said. “But they did not get any response from them.”

William said subsequent Guide articles reported the Black leaders also complained to Norfolk Social Service and WPA leaders in Norfolk about the working conditions of the women.
“I read in a publication sponsored by the city’s Chamber of Commerce called ‘Civic Affairs’ which explained why these women were selected for the job,” said Williams. “The article said the ‘colored’ women were on relief (WPA) to help them make money. Also they said that the Black women were best suited to do the job because they were used to ‘stooped’ work … bending over working the vegetable field at the many farms in North Carolina and Virginia.”

“But these ladies did not want a hand out,” said Williams. “They were working to support the families. The wages were 25 cents an hour and in two weeks, they would earn about $17.
Indeed many of the women who were among those who worked at the Garden also toiled collecting spinach, strawberries and other vegetable crops at nearby farms. Both Williams’ and Yarsinske’s books indicate that many of the women had received formal training at Virginia State or at Norfolk’s Mission College, both of which served the Black community during Jim Crow.

Sallie Austin, Williams said, was the first Miss Booker T. Washington High School and an Honor Grad and had attended Virginia State.
Williams said the Norfolk Botanical Garden’s Diversity Committee wants to continue the annual tribute to the 200 Black women and 20 Black men who worked to make the Botanical Garden a reality.

Williams said that only 58 of the 200 women who worked from 1938 to 1941 have been identified. In her book she has written bios of varying length of only 24 of them. She wants to expand that number. She said that in her book, she is making a plea for people to come forward with information on other women. “My motivations were varied for writing the book,” said Williams.

“First, why would these women do such work? Also it’s a tribute to Mr. Matthew Austin, who had been trying to get recognition for these women for years. “Then there is the excitement of family members of the women that they were being recognized for their work. There are many stories in newspapers and elsewhere which have been written which needed to be pull together to tell the full story of these women to honor and recognize their legacy.”