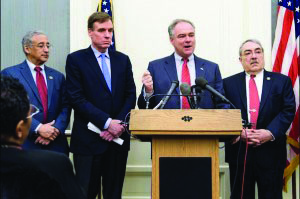 (TriceEdneyWire.com)
U.S. Sen. Tim Kaine and U.S. Rep. Bobby Scott, Democrats from Virginia, want to set up a federal panel to study the contributions and accomplishments of Blacks in America.

On Feb. 11, Kaine and Scott were joined by Sen. Mark Warner (D-Va.), U.S. Rep. Don Beyer (D-Va.), Congressional Black Caucus Chairman U.S. Rep. G.K. Butterfield (D-N.C.), and Director of the NAACP Washington Bureau Hilary Shelton in announcing the introduction of the “400 Years of African-American History Act,” a bill establishing a commission to plan nationwide programs and activities in 2019 to recognize the arrival and influence of Africans in America.

Kaine noted that other racial and ethnic groups have had similar commissions and Blacks shouldn’t be different. “I’ve been lucky to be a part of federal commissions that have been formed to study and celebrate English and Hispanic history,” Kaine said.
“Well, if English lives matter, if Latino lives matter, then African-American lives matter and they’ve mattered every day since the landing of those ’20 and odd’ African-Americans at Point Comfort, Virginia. The story has a lot of pain to it, but it’s a story that has to be told to commemorate that we as a nation, had it not been for 400 years of African-American history, would have been absolutely unrecognizable.”

In reference to other commissions, Kaine is talking about the 400th anniversary of the founding of Jamestown, Virginia, that took place in 2007 and the 450th anniversary in 2005 of the founding of St. Augustine, Florida, the first permanent European settlement in the U.S.
The first Blacks to come to American shores permanently in 1619 were from a Dutch ship and were believed by historians to be indentured servants because slavery didn’t exist in Virginia at that time.

Blacks could become full citizens in the Virginia colony a few years after their arrival but harsh restrictions, starting in 1639, eventually led to establishment of slavery based on color in 1662.
The legislation calls for the appointment of a 15-member commission. The commissioners will be uncompensated but will have travel expenses covered and will select a chair, vice chair, and executive director. The legislation states that grants will be available for work related to the commission and a final report on the project will be issued on July 1, 2020, the date it is scheduled to go out of business.

“The commission established by this bill will be charged with the important task of planning, developing, and implementing a series of programs and activities through 2019 that fully tells the story of African-Americans, their contributions to the fabric of our nation, and their resilience over the last 400 years,” said Scott, the first Black to represent Virginia in the U.S. Congress since Reconstruction.
Warner said that “confronting the sins of our nation’s past is the only sure way to move toward a brighter future.”
Beyer said that commission could serve as a beacon in the country’s “march toward racial equality” and noted the bipartisan support for the bill that includes Reps. Randy Forbes (R-Va.) and Scott Rigell (R-Va.).

The bill “will offer an important opportunity for discussion on a number of issues, including the ever-growing influence of people of African descent in the daily lives of all Americans,” Shelton said.
“The NAACP would like to thank Sen. Kaine and Rep. Scott, as well as the co-sponsors of this important legislation, for their efforts, vision and foresight.”