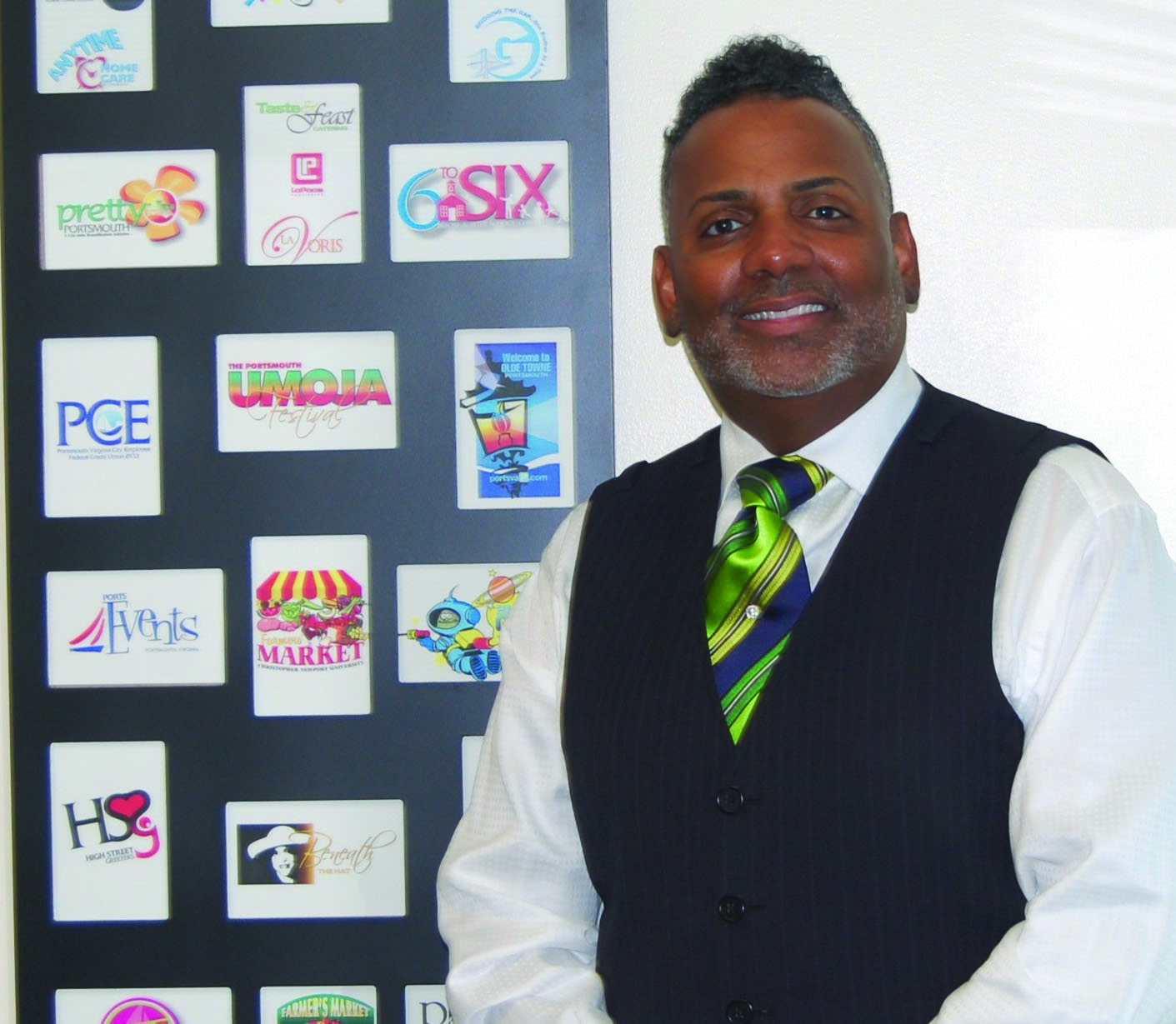 LaVoris Pace wears dual hats in Portsmouth as the Director of Marketing, Communications and Tourism, and as the Acting Deputy City Manager, which keep him pretty busy working for the city and its 96,000 citizens. Both jobs are complicated and residents of Portsmouth and the region, in general, can easily see the outcomes of his creativity and hard work as a public servant. But Pace’s range of contributions to the Hampton Roads area reaches beyond the task of being a highly effective bureaucrat.

The Smithfield native has attributed to the success of merchants and institutions, large and small, through his branding expertise.
The next time you see the logo of Norfolk State University, the city of Portsmouth, Faith Deliverance Church Center or the Hampton Roads Black Media Professionals, you are looking at his creativity at work.

Pace has created over 25 logos which are currently used to project the brand, mission and product identification of various public and private entities, and some of the region’s most respected corporations, non-profits and public institutions. Pace has a degree in Graphic Design from Norfolk State University, and has bolstered his professional acumen by studying marketing, advertising and the techniques of applying his craft from traditional media to the Internet. His initial entry into the world of graphic design was during the age of paper, which was more tedious and expensive.

Today, computers, the Internet, and social media drive the field so far as design and display, making it far more appealing and mainstream. The cost of advertising and getting the word out has been reduced, and has expanded the level of creativity, animation, and overall engagement with bright colors and imagery of ideas, commodities, and services. Pace has learned to keep up with the times along with these changes.

“A well crafted logo,” Pace said, “can easily trigger our identification of the mission product and reputation of a business with imagery, text or no words at all; such as the swoosh of Nike, Apple’s partially bitten image of an apple, or the red circles of Target department stores.” And then there are the iconic logos of Coke, the NFL and Pepsi. “A logo tells who you are; your trademark, your identification, and ultimately helps to convey your promise for the service or good that you are promoting,” said Pace. “For me, the most simple ones are the best. Thousands of people know CBS by the eye or Nike by their swoosh.”

The first logos or symbols of a culture and its people, according to Pace, may be an Ankh which is an Egyptian symbol generally referring to the idea of eternal life among gods, pharaohs, and other deities. The Ankh resembles the Holy Cross that is a Christian symbol and is worn by both Christians and non-Christians.

One of his first jobs after college was with the city of Norfolk as its first Graphic Designer, crafting eye catching brochures, newsletters and other material highlighting the services of city agencies for internal and external use. At his Alma Mater, he was Associate Director – and ultimately Director at NSU during President Marie McDemmond’s administration. Pace said his creative fingerprints were on a wide range of marketing and advertising material promoting academic and sporting events, student recruitment, and alumni.
Pace was also responsible for creating the University’s current logo.

“We wanted to project the best image of NSU as a quality student-centered university and rebrand the school as a leading and affordable Historically Black College or University (HBCU) of quality academics and a safe campus of history and pageantry.” Pace’s interest in graphic design extends beyond logos. “I love design, and not only logos for corporations or public agencies, but all kinds of design to include interior decorating, landscape design, fashion, and landscape design,” he said.

“I have a green thumb, so I like landscaping and designing small spaces outside a home. It’s not only an artistic expression, but it’s an art form which is also very rewarding and therapeutic for me.” Pace is also a highly regarded vocalist of both spiritual and secular music with several albums on iTunes to his credit. He has designed the CD jackets for all of his projects and has designed the logos and cover designs for other recording artists, as well.