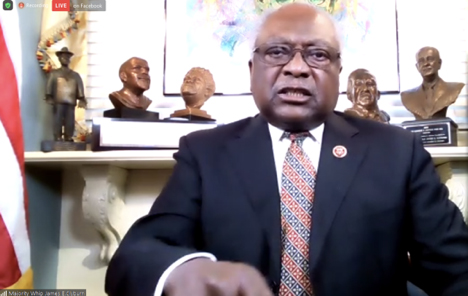 “I’ve been toying around with an idea now for two or three decades, ever since I’ve been in the Congress,” Clyburn said during Richard Prince’s Journal-isms Roundtable Jan. 3. “I’ve been trying to build up enough nerve to introduce a national hymn.

“We are putting that legislation in this week. I hope I can survive and see [that] it passes.”

The idea may already be taking shape. After a year of a national racial reckoning following the killing of George Floyd by Minneapolis police, the NFL decided that during its opening week, “Lift Every Voice and Sing” would be performed before each game, ahead of “The Star Spangled Banner,” as Andrew R. Chow reported in July for Time magazine.

Lift Every Voice and Sing, a soaring hymn that is sung while standing with respect during many Black events, was written by James Weldon Johnson and put to music by his brother, J. Rosamond Johnson, in 1900. The heart rinding words of the song describe the struggle of Black people in America from slavery to freedom.

In his conversation with the more than 50 journalists and guests, Clyburn, who provided the key Democratic primary endorsement that propelled Joe Biden into the presidency and now chairs the Biden inaugural committee, said he did not expect President Trump to attend the Jan. 20 inaugural ceremony.

Clyburn also expressed concerns that the swearing-in of Kamala Harris as the nation’s first vice president of color has added to security concerns.

Clyburn, whom the Guardian last week called “the most important politician of 2020,” was introduced by his daughter, Mignon Clyburn, formerly acting chair and member of the Federal Communications Commission and who serves on the FCC transition team. Her father said he had secured agreement from Biden to back universal internet access, an issue in which the FCC also has jurisdiction.

“The greatest thing that we can do in the 21st century for rural America, for what I would call low-income communities, is to have internet in every home,” Clyburn told the participants on the Zoom call. Journal-isms Roundtable is a monthly gathering of journalists discussing race, journalism and current events, with more watching on Facebook Live.

Further, Clyburn warned about infiltration of the Black Lives Matter movement, pointing to vandalism targeting the leaders of the U.S. House and Senate over the holiday weekend. The attackers blighted “their homes with graffiti and in one case a pig’s head as Congress failed to approve an increase in the amount of money being sent to individuals to help cope with the coronavirus pandemic,” as the Associated Press reported.

“How sophisticated it was, that’s somebody trying to start something,” Clyburn said of the vandalism. “That’s what that is.

“We have to be careful that we do not allow an infiltration of this movement. Ask the attorney general of Minnesota what they found out . . . in Minneapolis when people started breaking out windows and breaking down buildings. It was an infiltration there.

“In Columbia, S.C., we had a very peaceful march in Columbia in support of Black Lives Matter. Their timing was wrong, and when the folks got there to infiltrate the movement, we had terminated the march, had come to an end, but they still went around Columbia, breaking out windows. And we did an investigation and it had nothing to do with the movement.

“That’s why you’re going to be so important.” Journalists of color have “had the life experiences” to know when certain assumptions don’t pass the smell test.

Clyburn is also chairman of the House Select Subcommittee on the Coronavirus Crisis. In that capacity he invoked the power of journalists to get beyond sound bites about the COVID vaccines.

“When it comes to COVID, my big job now, we’ve got two vaccines out there — There’s a third and fourth on the horizon — I do believe there’ll be six or seven.” he said. “My job is to make sure that these vaccines are distributed in an efficient manner, in an effective manner, and in an equitable manner.

“Those are the three E’s that I’m going to be working with. I tell people all the time that I remember the polio vaccine. There were two polio vaccines. One was a shot in the arm, and one was a drop of serum on a lump of sugar. Can I tell you which communities got the shots, and who got the lump of sugar? That’s going to be our job.

“That you make sure that this vaccine is equitably distributed when it’s made available. I’m going in to get my second shot on Friday, and that’s going to be another problem.

“And that’s why I say that you all are so important! ‘Cause I do believe . . . I know about the Tuskegee experiment. And I’ve lived a lot of inequities. I know what it is to have appendicitis, and then have to go through the back door of a doctor’s office to go through a segregated wing of a hospital. They have your appendix removed. . . .

“But you’re going to be an integral part of educating the public on this vaccine. Because we are not going to get rid of this pandemic until we get beyond it.”