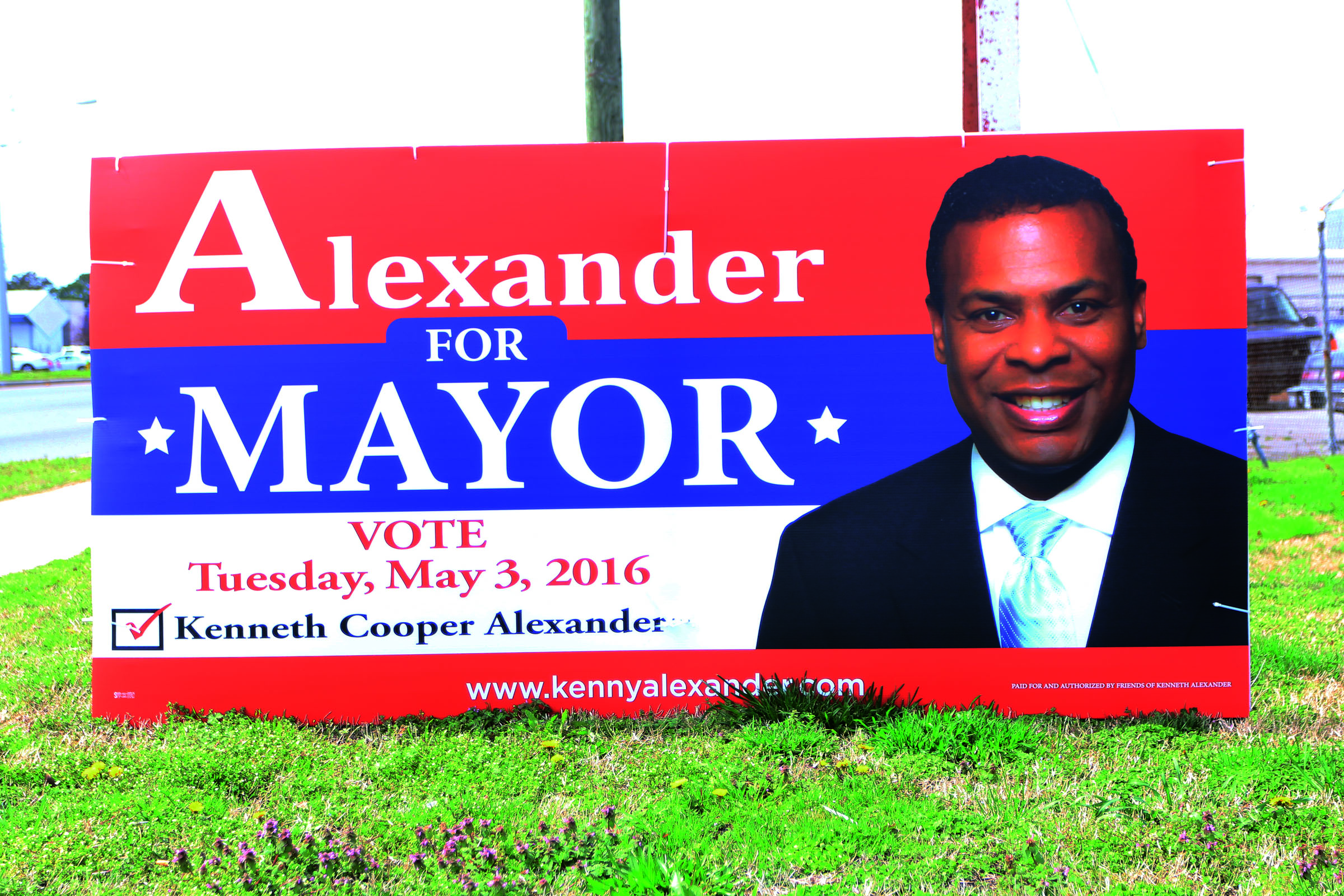 The New Journal and Guide makes occasional political endorsements. We prefer to help our readers make their own informed decisions by offering news and information they can use toward that end. The current Norfolk Mayoral race has engendered such energy, however, that we are digressing. On May 3, 2016, registered voters in Norfolk will elect one of three men as the next mayor—State Sen. Kenneth Alexander, Sheriff Bob McCabe or Councilman Andy Protogyrou. To our credit, the New Journal and Guide has profiled each of them to our readers in our weekly newspaper. Voting is a serious matter that we believe best takes place after carefully examining the candidates and determining who best lines up with what the voter believes and wants to see achieved by our leaders.

We have done this and our vote is cast for Sen. Kenneth Alexander. Some may say our choice comes as an African American newspaper aligning with an African American candidate. There is some truth to that. Former Gov. L. Douglas Wilder, himself an African American who broke the color barrier to become the nation’s first African American governor, offered a great analysis on why African Americans should support other African Americans. Speaking at the Attucks Theater recently, he said, “Rather than for us to worry about a fair slice of the pie economically, would it not be better if we had the knife that cut the pie? Why are we not a part of the decision-making process?”

The choice for African Americans, as it is for all Americans of goodwill, has to be in who we believe will be most successful in bringing along other Blacks into the fold of equity, justice and fair play. Norfolk city leaders do well in running the city from the top down; they also need to know how to get into the neighborhoods and know the people they are representing, their concerns and build empowering relationships with them that create change for those who feel dispossessed.

What is best for the African American community is not automatically on the minds of all African Americans, so let us set the record straight. Our vote for Kenneth Alexander is only in part because he is African American. In a city that approaches 50% Black population, it is long overdue that a qualified person of color should be taken seriously for its top political leadership. Every Hampton Roads city, except Virginia Beach and Norfolk, has been or is being led by an African American. What has taken us so long in Norfolk has much to do with historic leadership of the city by the west side and the anointment that is promoted as necessary from the powerbrokers onto persons seeking political leadership.

Alexander is a serious contender for the office, and he can make significant contributions in helping Norfolk’s city council, its business and community leaders, and its people come into the 21st century to confront the challenges the city faces and recommend reforms to addressing them. We offer five reasons for our support.

1. He has a genuine sense of inclusiveness that comes from his interactions in the community where he approaches not only privileged African Americans and Whites, but also less privileged persons, Gays and Hispanics in the city. This inclusiveness will allow him to develop public-private partnerships that bring people together for city growth. He supports council’s promoting a neighborhood plan where the residents of the city’s neighborhoods will help in identifying what is important to them
2. As a long time successful small businessman with locations in his native Berkley and in the Wards Corner area and in Portsmouth, he knows how to make a payroll, operate (and grow a business) within a budget, and create jobs, which give him an edge in directing council on making policies to impact new jobs creation and small business development in the city.
3. Having served as a member of the Virginia General Assembly as a State Delegate and now a State Senator, Alexander brings great experience to Norfolk City Council as a skilled political leader. He has been endorsed by Virginia’s top political leadership to include the Governor, both U.S. Senators, U.S. Congressman Bobby Scott, and former Governor L. Douglas Wilder, all who attest to his proven legislative performance and leadership. Consequently, he knows the impact of federal and state money on the city of Norfolk’s budget, and he supports seeking pots of state and federal funding to impact education, health, housing, and employment.
4. Further, Alexander knows that Norfolk is the hub of Hampton Roads, and he has the know-how to leverage his relationships in Richmond and Washington to improve our schools, diversify the economy, and create change opportunities for segments of the population that feel overlooked.
5. He has the vision of a Norfolk where new high tech businesses will relocate because the city’s education system will be preparing workers for these 21st century jobs that impact the economy and encourage people to live in Norfolk to enlarge the tax base.

Alexander is giving up a very prestigious seat in the state legislature to become mayor of Norfolk which is a direct application of power each day and not just during a 60 or 30-day session of the state legislature. We believe he is up to the challenge. We believe Alexander understands the historic weight of this spring’s election in a city which has seen its minority population rise significantly. We believe he will make all of Norfolk proud. On May 3, we urge you to vote for Kenneth C. Alexander and make history happen in Norfolk as we elect our first African American mayor.