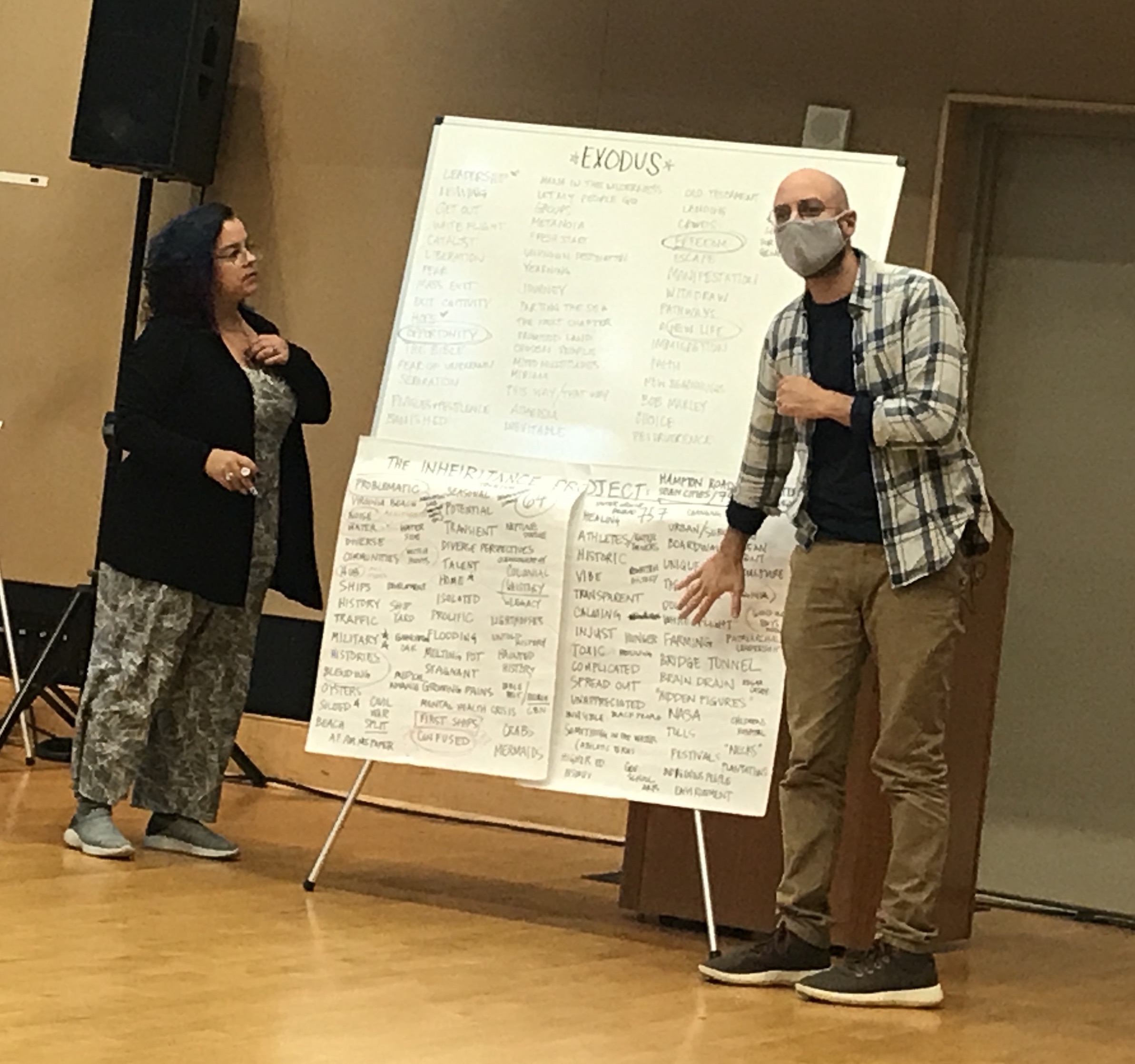 Hampton Roads has 422 years of history. As the first English Colony, it expanded geographically and so did the diversity of its inhabitants.

It’s an appeal that has the attention of a group of creative artists who want to see what the ripples of time and human interaction have created over four centuries.

For the past weeks, a team from The In[HEIR]itance Project, a national non profit arts organization, has been working on such an enterprise in Hampton Roads, which they also are calling “Coastal Virginia”.

Team members have hosted a series of “salons” or gatherings with Hampton Roads residents including creative workshops and community conversations throughout the seven city area to gather information to help craft an original play about the area with people all across the area. Participants have included theatre students at Old Dominion University, visual artists from the Virginia Museum of Contemporary Art, local YMCA leaders, churches, synagogues, and military spouses.

After dedicated weeks of study, writing and casting, the Project will deliver their finished product as a play that will reveal what they learned that defines the area, history, and lifestyles as guided by the area’s residents.

The In[HEIR]itance team members, Chantal Pavageaux and Demetria Geralds shared with the GUIDE how the project will achieve its goals in Hampton Roads in the coming months.

Pavageaux is a cofounder of the organization and is a writer, director, and interdisciplinary artist. Her work has been produced nationally in theaters, including the Guthrie Theater and Walker Art Center in Minneapolis, MN; and Mabou Mines and Ars Nova in New York, NY.

Demetria Geralds is an independent costume designer and wardrobe stylist based in Omaha, NE. She will be contributing to the Hampton Roads project.

The salons, the two said, help to develop the ideas and text for the creation of an original play based on the unified effort of all of the locales and The In[HEIR]itance Project team members.

The non-profit group has undertaken the same project in other cities and regions around the country, starting in 2015.

Using the unique history of Hampton Roads and the Biblical book of ‘Exodus’, the team’s salons have been used to activate a dialogue on racial dynamics, redlining, and displacement among other issues to create a play. It will open to the public at the historic Attucks Theater, as part of the Virginia Arts Festival performances May 6-8, 2022.

The team was attracted to the area because of its rich cultural history that derives from Native Americans, white colonists, indentured workers then Black slaves, and the white migrants from around the world who found their way into the cultural mix.

Then came the forming of the various communities – the cities and towns and the institutions which have sustained them with all of their varied history and legacies, over the years.

According to The In[HEIR]itance website. “Inheritances are reminders that we are part of a long thread of humanity that came before and will continue after us. We are both inheritors and ancestors simultaneously, and we have limited control of either.”

Since 2015, The In[HEIR]itance Project has engaged over 7000 people in over twenty communities around the US.

Geralds and Pavageaux said The In(Heir)itance Project has used the human and institutional history unique to each one of these locales to formulate the plays they have produced.

In Hampton Roads that includes elements from each of its communities.

Race and the stories of African Americans will be essential.

The first 20- and odd Africans arrived at Fort Comfort (now Fort Monroe in Hampton) in 1619.

The first two Black slaves who escaped from Norfolk and found refuge at Fortress Monroe were both incidents taking place on the peninsula.

More recent racial issues which may find their way into the play could be the Impact of Jim Crow or housing redlining or other forms of racial bias.

Pavageaux mentioned that the works of The In[HEIR]itance Project will rely not only on the generation now in control, but the future ones

Both mentioned how impressed they were with the youth and young adults they have encountered in the region.

Pavageaux noted how the young people are “eager to take the reins” of cultural and economic leadership in Hampton Roads.

She said she hopes the project will inspire their children who will inherit what their parents and ancestors have designed and dismantle the biases and disparities they see today.

“If we keep doing the same things we have done over the years,” said Geralds, “what we will get the same results.”

In the coming months as a small army of about 30 In[HEIR]itance Project artists and technicians will invade Hampton Roads leading up to the final production at the Attucks.

They will recruit and apply the skills sets of local actors, artists, designers, writers and historians to develop the script for the upcoming play, yet unnamed, and will be one word to reflect the legacy of the region.

Along with the revealing theatrical work, all of the box office proceeds go to local artists and organizations.

A list of 30 organizations, including the New Journal and Guide, Virginia Arts Festival, all of the major colleges and universities, public school divisions, Hands United Building Bridges, various youth support groups, Christian and the United Jewish religious organizations are lending their support to the Project.

For more about the project go to Exodus: Coastal Virginia (inheiritance.org)