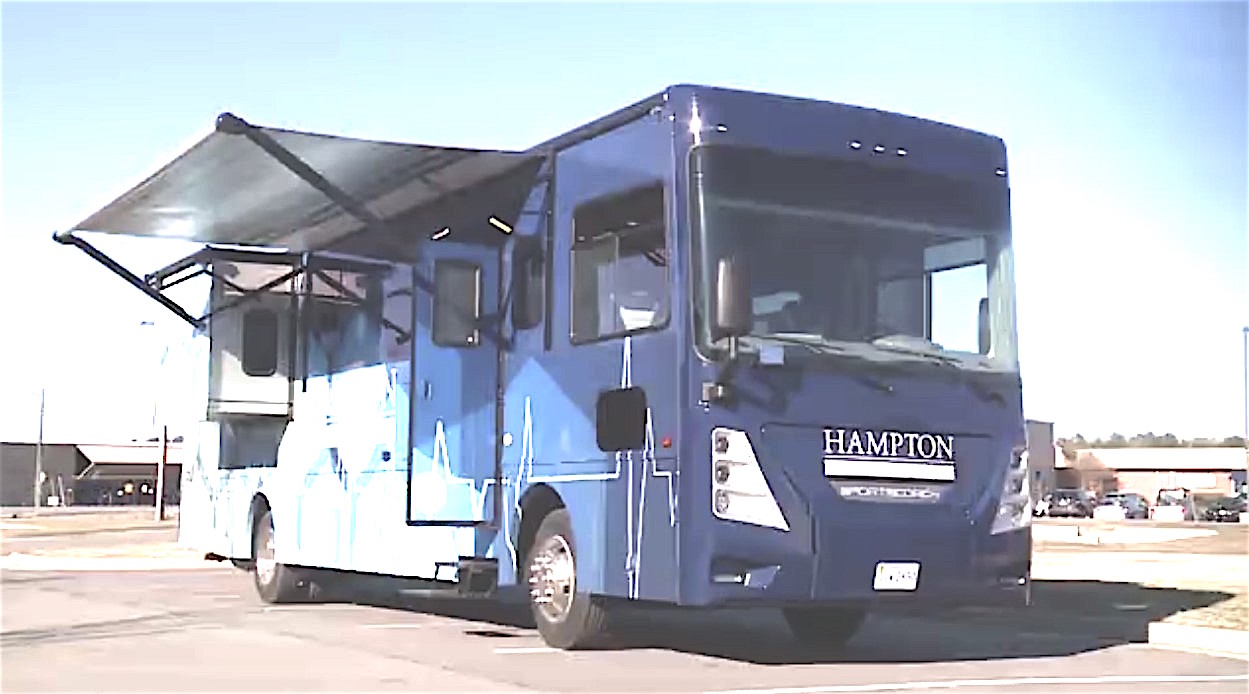 Hampton University has spent some $600,000 to outfit and convert a Recreational Vehicle (RV) into a mobile unit so it can be used to provide COVID-19 testing and vaccinations to residents living in nearby urban and rural communities.

The school’s leaders, including President William R. Harvey, believe poor people living in urban and rural areas are hard-pressed to access sites where they can get the vaccination.

So Hampton University stepped up and used the funds it received from several large donations this year to help pay for the vehicle to serve the community in its proximity. It was developed by scientific manufacturer Thermo-Fisher Scientific meet specifications for the job at hand.

HU also opened its own testing lab on campus.

And this week, on March 8, the University, in collaboration with the nearby Veteran’s Administration Medical Center, opened its Convocation Center to allow the VA to provide vaccines to veterans.

Since last December, the massive facility has not being used for basketball after the school canceled its varsity basketball season due to the COVID-19 pandemic.

But according to Bill Thomas, HU’s Associate Vice President of Governmental Affairs, and confirmed by Dr. Harvey in a recent WHRV-FM radio interview with Cathy Lewis on Hear Say, the school has no vaccine to accomplish its mission with the mobile unit.

The university wants to know why the state which controls the bulk of the state’s vaccine supply from the federal government has failed to include HU as a vaccination site, particularly to meet the needs of an underserved and COVID-devastated population.

Thomas said he submitted a letter to Governor Ralph Northam and members of the Hampton Roads Legislative Delegation asking why the nationally acclaimed HBCU has been denied access to the vaccine.

The letter was submitted February 8. As of this week, Thomas said he had not received even a cursory response from the Governor or his aides.

Only one of the lawmakers, Democrat Clinton Jenkins, who represents the 76th District where Thomas is a resident, has responded with a phone call.

The only media attention the school’s plea for vaccines has received is from the New Journal and Guide, which ran Thomas’s letter in total in a recent edition of the publication.

The Governor’s office has not responded to a media inquiry from the GUIDE.

vaccine distributions and testing especially for poor and isolated African Americans in the urban and rural areas of the Peninsula.

“Black people in Virginia should understand that they have been left out of the planning, funding, and operation of major healthcare initiatives in our communities,” Thomas wrote in the letter.

He noted that the state has included Christopher Newport University, Newport News Shipyard, the Hampton Convention Center, and the Williamsburg Visitors Center as vaccination treatment centers located on the Peninsula, none having a direct connection to the African American community. Thomas called the state’s exclusive selection of white-managed centers “a prime example of why Black people do not trust White America and the federal, state, or local government to manage a most tragic pandemic in America.”

organizations that should clearly be involved on the front end,” he wrote.

On February 24, Hampton University held an event to unveil its COVID 19 vaccination and testing mobile unit.

It is equipped with pharmacy-grade freezers capable of storing vaccines, and is on hand at the campus.

“Hampton is trusted. We’re coming to a community near you to provide the services that you need, and we look forward to working with you.”

Media reports have noted that Governor Northam recently announced the state is partnering with Walmart to launch mobile clinics aimed at boosting vaccination rates in low-income and minority communities.

Thomas said Hampton University had also offered itself up to the state as a mass vaccination site apart from the mobile unit, but didn’t hear back from the state.

“At the end of the day, we just want to be part of the effort to fight this virus which is infecting and killing Black people at a disproportionate rate,” said Thomas.

Thus far, most of the vaccine the state has on hand for the Peninsula has been distributed through hospital systems and at mass vaccination clinics at Christopher Newport University and the Hampton Roads Convention Center.

Thomas said the issue of the state providing vaccine resources to Hampton University, a private university, should not be an issue.

Normally private schools in Virginia do not receive any direct operational funding from the state. Hampton like other private universities receives money for student tuition assistance.

Hampton sought to acquire some $10 Million in funding from the state last year for its world class Hampton University Proton Institute (HUPI) and other needs, “but it was cut out of the governor’s budget.”

Hampton University gets some $587,000 for the HUPI center as part of a contract agreement with the state.

Such funding is provided because this school provides a service to the state and the public.

The school gets state funding because it allows the public to use its library, according to State Senator Lionell Spruill’s office.

But Thomas said now that the Biden Administration has managed to muscle the $1.9 trillion COVID Relief Bill through the U.S. Congress, HU may be able to acquire vaccine and funding for its

mobile unit and other projects to help fight the pandemic in its service area.

“We will find a way to do it through the state or other sources,” he said. “But we think that this world-class university should be part of the effort to serve our community and help it fight this pandemic.”