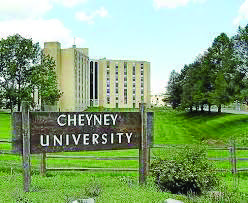 CHEYNEY, PA
Cheyney University of Pennsylvania held its first ‘Spirit Send-Off Rally’ of the football season on Friday, September 8, 2017, to help pump-up players as they prepared for the first game of the new year.

Cheyney has been the object of media speculation that the school, the nation’s oldest HBCU, might be closing its doors.

University officials met with its licensing board on Sept. 1, after the Pennsylvania State System of Higher Education provided last-minute support and recently agreed to forgive emergency loans totaling $30.5 million – provided Cheyney maintains a balanced budget until 2021.

Specifically, Cheyney submitted a mandatory report to The Middle States Commission on Higher Education, which placed Cheyney on probation in 2015 and is expected to announce its decision in late November. The report shows how Cheyney will balance its budget and addresses other institutional concerns including enrollment declines, according to news reports.

Interim president Aaron A. Walton, who was appointed in late May, said in a recent interview in the Pittsburgh Post-Gazette, “I am 100 percent confident that we have been responsive [and] will be in a position to demonstrate that we are moving forward.”

The struggling 180-year-old institution is located in suburban Philadelphia. It is the nation’s oldest Historically Black College and University. Its enrollment since 2010 has dropped by more than half, to 746 students during the 2016-17 academic year.

It aims to move forward by cutting $7.5 million from its $35 million budget, officials said. It has also eliminated about two dozen staff and administrative positions, most of them in recent weeks, including that of its lead spokesperson.

It also expects to suspend an unspecified number of Cheyney’s 18 academic programs, though decisions about which majors will be affected have not been made, Walton said.
In addition, Cheyney is moving to cut expenses for goods and services provided by third parties. It is exploring ways to generate revenue through property it owns, including campus buildings now unused.

The school was founded in 1837 by Quaker philanthropist Richard Humphreys to prepare African-Americans to teach. Its graduates include Pennsylvania’s education secretary, Pedro Rivera, ’01, and the late Ed Bradley, ’64, former correspondent for CBS’ “60 Minutes.”